(ORDO NEWS) — French company Glowee has turned the small town of Rambouillet in France into the subject of a strange but breathtaking lighting experiment.

As you read this article, several bioluminescent cylindrical tubes, emitting an azure, ethereal glow, are already lighting up the waiting room of the city’s COVID-19 vaccination center, according to the BBC.

These otherworldly lights are powered by living organisms through a process known as bioluminescence, which you must have witnessed if you’ve ever seen a firefly.

And the soft turquoise hue is spreading as the startup leads efforts in other French cities as well, using a range of biological processes to harness natural light sources with a focus on sustainability and protecting biodiversity.

The production and emission of light from chemical reactions within living things is known as bioluminescence, according to the National Oceanic and Atmospheric Administration.

This phenomenon can be observed in many parts of nature – from mushrooms to fireflies and fish. For example, fireflies light up to attract potential mates, and some algae glow when the water is rough. Some species, such as deep-sea anglerfish, use this phenomenon to attract prey.

According to the BBC, 76 percent of deep-sea creatures have the ability to glow through bioluminescence. 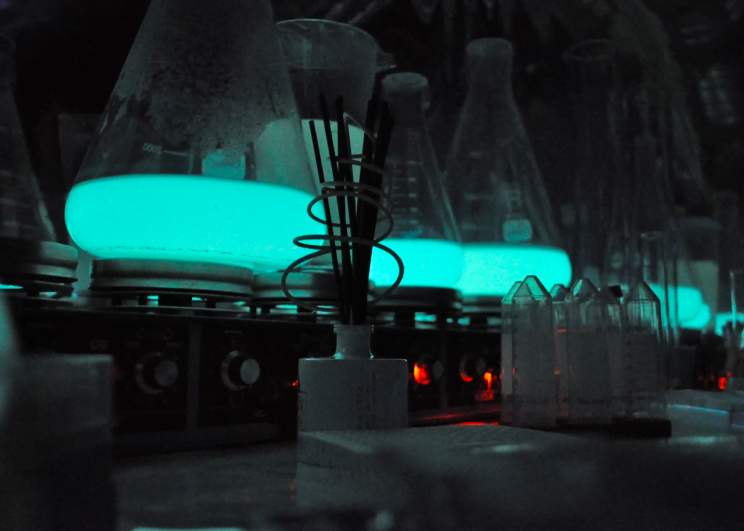 How is a startup using bioluminescence?

Glowee, on the other hand, uses a marine bacterium called Aliivibrio fischeri collected off the coast of France to light up rooms and possibly entire cities in the future.

“Our goal is to change the way cities use light,” Sandra Rey, founder of Glowee, told the BBC. “We want to create an atmosphere that is better for citizens, the environment and biodiversity, and to impose this new philosophy of light as a viable alternative.”

The startup keeps bacteria in test tubes filled with salt water. This allows bacteria to circulate in what is essentially a glowing aquarium that easily receives a combination of essential nutrients and air is pumped through the water to provide oxygen.

Light is produced by internal biochemical processes that are part of the normal metabolism of the body, so it requires almost no energy to operate, other than that needed to produce food consumed by bacteria.

When they want to turn off the lights, they cut off the air supply, which puts the bacteria into an anaerobic state where they no longer produce bioluminescence.

Use bioluminescence to light cities?

The startup believes bioluminescence produced by bacteria could be an energy-efficient, sustainable solution to reduce our reliance on electricity for lighting, which is mostly produced by burning fossil fuels.

The entire process relies on living organisms, so it faces several hurdles that must be overcome before it can be used on a large scale. One disadvantage is that the process creates only a small fraction of the light.

The startup is improving bacteria without the use of genetic modifications, making them more efficient in terms of light production. They can also be temperature sensitive, so Glowee is working on these issues to light the way for other cities and towns.