(ORDO NEWS) — SibFU scientists in collaboration with colleagues from the United States, thanks to the growth rings of Siberian larch, found out how soil temperature at different depths affects the growth of this tree.

In the valleys of southern Siberia, on the borders of forests and steppes, the growth of trees is limited by a lack of water.

Against the background of hot summers, droughts can lead to other extreme events, such as fires. Therefore, such regions are of interest to dendro climatologists – scientists who study the relationship between weather conditions and tree growth rings.

“Although the impact of climate fluctuations on vegetation is a widely studied problem, there are enough “white spots” here. One of the challenges is the availability of climate data. It is possible to use information from sensors-loggers installed directly on the forest plot under study, but such measurements are of short duration.

Most often, we take series of observations of state weather stations, but in the expanses of Siberia, the nearest station may be hundreds of kilometers from the forest stand under study.

There are also spatially distributed databases of climate data averaged over a geographic coordinate grid with a spatial resolution of tens of kilometers, but one cell can include terrain that is heterogeneous in relief and vegetation.

And the microclimate under the very canopy of the forest differs from the climate of the open area. By default, it is assumed that fluctuations in climatic factors, especially temperature, occur quite synchronously at such distances.

This makes it possible to calculate their influence on tree growth using the methods of mathematical statistics,” said Liliana Belokopytova, the author of the idea of ​​the study, senior researcher at the Dendroecological Laboratory of the Khakass Technical Institute, a branch of the Siberian Federal University. 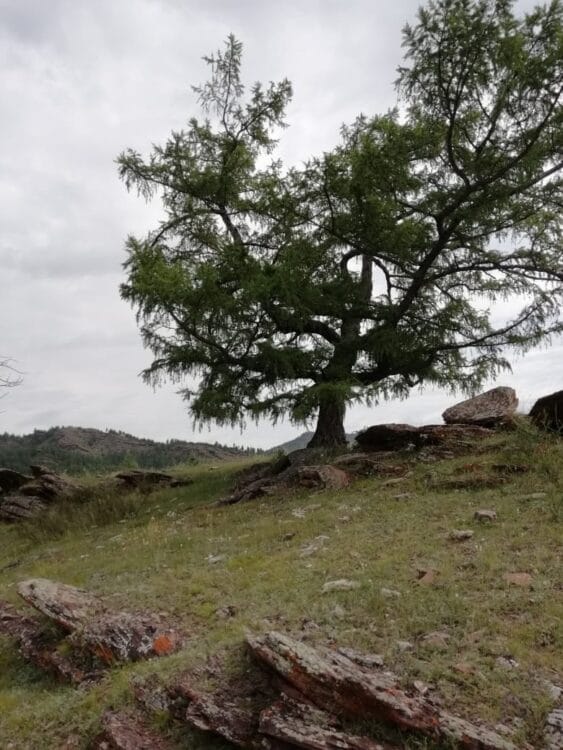 As a rule, dendro climatologists take into account only atmospheric, terrestrial weather conditions and extreme events. But the essential and vital part of the tree – the root system – is underground and remains “behind the scenes”.

At the same time, it is absolutely obvious that seasonal fluctuations in soil moisture and temperature should have no less impact on the tree, since the roots are the nourishing and supporting part of the tree.

The temperature regime of the soil at different depths is determined by its heat exchange with the atmosphere, and therefore depends on air temperature and illumination.

But the soil temperature field has a more mosaic structure. Its spatial heterogeneity is increased by many factors: the composition and structure of the soil, uneven terrain and groundwater, snow cover, permafrost, shading by the vegetation canopy, and so on.

Considering that data on soil temperature are not measured at all weather stations and not for the entire period of their existence, this limits the interest of the scientific community in studying the influence of the “underground climate” on plants.

The scientific team of SibFU tried to find out whether it is possible to use data from weather stations on soil temperature over long distances in dendroclimatic studies.

“The growth of trees in the Khakass-Minusinsk depression has been studied in our laboratory for several years. We compared the daily series for soil temperature at different depths, above-ground temperature and precipitation at two meteorological stations with the width of the growth rings of Siberian larch in three forest-steppe areas located within 100 kilometers from the stations. It turned out that in spring and early summer, soil temperature has an even stronger effect on larch growth than air temperature.

It was found that the maximum influence falls on the depths of 20-80 centimeters – the root zone. When these layers are heated, the water from the soil evaporates quickly, and the plants experience stress.

From the point of view of the suitability of rows of remote weather stations, we found that for analyzing the influence of underground climate, the similarity of the soil structure in the studied forest area and at the weather station is no less important than the distance between them,” said Dina Zhirnova, head of the dendroecological laboratory of KhTI, a branch of SibFU.

The scientists also studied the heterogeneity of climatic influences on larch growth at the scale of individual trees. It turned out that the sensitivity to the above-ground and underground components of the climate depends approximately to the same degree on the micro-conditions of the landscape, forest density, age and other individual differences of trees.

According to the results of the study, scientists confirmed that despite the mosaic nature of the soil cover, the soil temperature series at weather stations are no less applicable in dendroclimatic analysis than the commonly used atmospheric climatic data.

The results of the work are published in the journal Forests . The study was financially supported by the Russian Science Foundation project “Studying the Genetic Adaptation of Trees to Stressful Environmental Factors Based on Genome-Wide and Dendrochronological Analysis in the Context of Global Climate Change”, carried out under the guidance of SibFU Honorary Professor Konstantin Krutovsky.