(ORDO NEWS) — When we think of climate change, we often imagine how a warmer world will impact species, but a new study highlights the importance of changes in precipitation. The finding suggests that paying attention to the environmental triggers within each species’ lifecycle will help us better understand how they will be affected by climate change.

The research focused on the Miami blue butterfly (Cyclargus thomasi bethunebakeri), a federally-listed endangered species that exists solely in a pocket of habitat in southern Florida. Their federal status directs more resources towards their conservation, and understanding the Miami blue’s lifecycle in relation to our changing climate is critical for predicting how they will fare in the future.

Like many tropical insect species, the lifecycle of Miami blue butterflies includes a state called “diapause,” when larvae suspend their development during dry conditions. The onset of the wet season triggers diapausing larvae to restart their development into adult butterflies.

The duration of the dry period, and therefore the duration of diapause, can have a significant effect on population numbers. If larvae have a short diapause, then they are more likely to reach adulthood and reproduce than if there is a long dry season with an extended period of diapause.

“We found that shifting rainfall patterns can determine whether the Miami blue butterfly populations grow or shrink, even without any other environmental variables changing,” says Erica Henry, a postdoc in applied ecology at NC State and author of the study.

“This is not only concerning for this rare butterfly, but for all insects in precipitation-driven systems. Both the tropics and rainfall patterns have been largely overlooked in the conversation about climate change and animal lifecycles.” 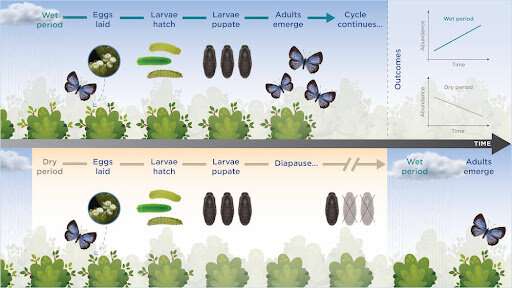 Several species have precipitation-based environmental triggers within their lifecycles. And unlike temperature, which largely trends up under climate change, shifts in precipitation will be more varied and nuanced across the globe: some areas will dry out, some will become inundated, and some will see no change.

And in some places, like southern Florida, it’s uncertain how rainfall patterns will shift with climate change. To account for this, the researchers simulated future conditions using 20 different climate models to test how Miami blue populations would respond. In most of those tests, butterfly populations declined when rainfall was delayed and the diapause duration increased, even when all other environmental conditions did not change.

“The tropics, and more specifically that fuzzy area we call the sub-tropics, covers an extremely diverse set of ecosystems that are much more sensitive to projected shifts in precipitation than temperature,” says Adam Terando, a U.S. Geological Survey Research Ecologist and adjunct professor in the Department of Applied Ecology at NC State who co-authored the study.

“The problem is, there’s also a lot more uncertainty about those precipitation changes as the planet warms. We wanted to bring attention to these rainy-season ecosystems and demonstrate how linking climate science with ecology can give us new insights into what to expect in the future.”

This research is one of the first efforts to examine a tropical insect under climate change using the lens of precipitation rather than temperature. Tropical insect species in areas that are expected to dry under climate change will likely see similar impacts on their lifecycles, possible declines. In fact, changes in precipitation patterns may explain currently declining populations.

“Climate change is happening everywhere,” says Henry. “We can get a better handle on what actions may minimize the negative impacts to biodiversity by thinking more broadly about what that change really means in different parts of the globe.”

Climate change will threaten the existence of 60 percent of cacti

Climate change will threaten the existence of 60 percent of cacti