(ORDO NEWS) — Giant Jupiter and the shadow of its largest moon, Ganymede, dominate this latest image from NASA spacecraft.

On February 25, it passed for the 40th time near a planet spewing out streams of radiation, and the resulting raw images of this encounter were transmitted to Earth. After that, the scientist Thomas Thomopoulos created this amazing view based on what the JunoCam saw.

If an observer could brave the radiation and swim inside the oval shown in the image, NASA added, he would see a total eclipse of the Sun. “Jupiter has more total eclipses than Earth,” the agency said, noting that the planet has four large moons (Ganymede, Io, Europa and Callisto) that orbit closer to Jupiter’s plane than our single moon.

The JunoCam camera, according to the agency, “captured this image from a very close distance to Jupiter, which makes the shadow of Ganymede appear especially large.”

The Juno spacecraft is on a long-term mission to study the weather and dynamics of Jupiter, the largest planet in our solar system. Studying this planet up close also allows scientists to get an idea of ​​how large exoplanets might behave in other solar systems.

Juno remains in good health amid a long mission, but its lifespan will be limited due to the large amount of radiation it receives, NASA warns. But scientists have big plans for Jupiter’s icy moons in the 2030s, including visits by NASA’s Europa Clipper spacecraft and the European Space Agency’s Jupiter Icy Moons Explorer. 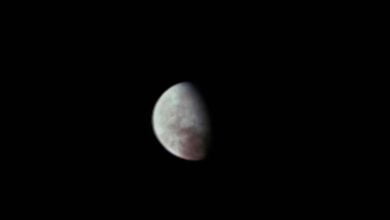