(ORDO NEWS) — In the Cosmic calendar, which displays the chronology of the Universe during one Earth year, modern people appear only at the very last moment on December 31st.

Everything we understand about the evolution of the universe, we had to put together. We simply have not been around for almost the entire 13.7 billion year history of the cosmos to watch it in action.

This detective work was pretty grandiose. And one of the tools in our set is modeling the formation and evolution of huge structures that cover the observed space.

Now, using supercomputers, an international team of scientists led by the University of Helsinki in Finland has created the largest and most accurate simulation of the evolution of the local universe. This could help us understand the dynamics of the universe, including the mysterious dark matter and dark energy.

“The simulations simply show the effects of the laws of physics on dark matter and cosmic gas over the 13.7 billion years of our universe,” says cosmologist Carlos Frank of Durham University in the UK.

“The fact that we were able to reproduce these familiar structures provides impressive support for the standard model of cold dark matter and tells us that we are on the right track to understanding the evolution of the entire universe.”

The simulation is called SIBELIUS-DARK, and it covers a volume of space that extends 600 million light-years from the solar system. This includes several clusters of galaxies, including Virgo, Coma, and Perseus; the Milky Way and Andromeda galaxies; Local emptiness; and the Great Attractor. 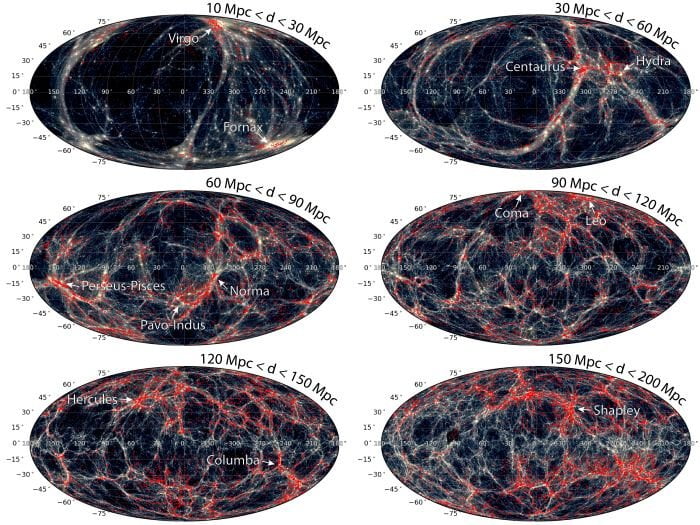 In this volume of space, the simulation had to take into account about 130 billion particles. Computing these particles over the entire lifetime of the universe – and at higher resolution than ever before – took several weeks on the DiRAC COSmology MAchine (COSMA) supercomputer at Durham University, yielding a petabyte of data. The researchers then had to compare their results with observational data from the real universe.

This allowed them to study the so-called cold dark matter cosmology model, which is the current standard for mapping the evolution of the universe. It relies on a vast cosmic web of dark matter – a mysterious, invisible mass responsible for imparting gravity to the universe beyond what can be explained by ordinary matter.

According to this model, dark matter accumulates in clumps called halos. Hydrogen and other gases enter these halos, eventually forming stars and then galaxies. This model explains quite a few properties of the observable universe. However, most simulators that use it simulate a random region of the universe.

Our patch of the universe is slightly outside the random norm. The Milky Way floats in a void, or the relative low density of galaxies compared to the average distribution in the wide universe. So the researchers decided to recreate our own corner of the universe to see if a model of cold dark matter could replicate what we see in our immediate vicinity.

“This project is truly groundbreaking,” says cosmologist Matthieu Schaller of the University of Leiden in the Netherlands. “These simulations demonstrate that the standard model of cold dark matter can give rise to all the galaxies we see in our area. This is a very important test that the model must pass.”

But SIBELIUS-DARK also showed that the Local Void might be unusual, as it seems to have evolved from a local large-scale under-density of dark matter from the very beginning. What led to this lack of density in the early cosmic web will be the subject of future research.

In the meantime, the team will conduct further analysis of the simulation to test the cosmological model of cold dark matter.

“By modeling our universe as we see it, we are one step closer to understanding the nature of our cosmos,” says physicist Stuart McAlpine of the University of Helsinki.

“This project provides an important bridge between decades of theory and astronomical observations.”