(ORDO NEWS) — The medieval period in Western Europe, from AD 500 to 1400, was a much simpler (and in many ways much more violent) time than the world we live in today.

Since then, our understanding of science and nature has expanded greatly, especially given the strange and unusual ideas many people of that time had about how the world worked.

Anyone want to take the pig to court? The people of the Middle Ages considered this quite logical. Just like some people of that era, it was reasonable that a certain kind of lambs could grow on a tree. 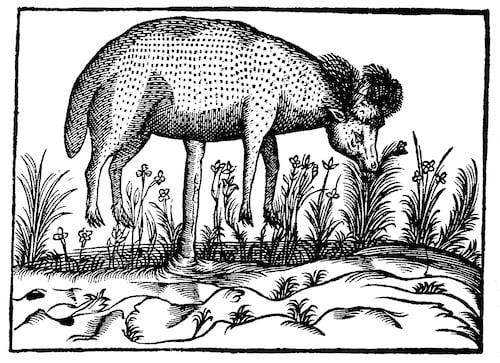 Of course, we now know that no animal grows out of a plant rooted in the ground. However, in the Middle Ages, the inhabitants of Western Europe, who had just begun to explore the world on a large scale, believed that this was exactly what they discovered when traveling to the east.

Due to this, there are several theories about what they might have seen instead, which may explain this unusual, yet common belief of the Middle Ages. 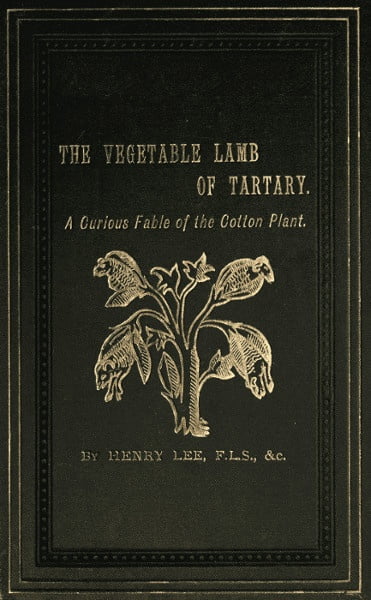 The notion in the Middle Ages that a lamb could grow on a tree was also not something out of the ordinary.

The lamb including descriptions of what it looks like, what it tastes like, and what kind of animals might prey on this common herd animal growing on a tree has been written about, and generally taken quite seriously.

The first known written record of a lamb dates back to 500 AD. in the writings of Rabbi Johanan in the Talmud Hierosolimitanum.

According to Henry Lee, a 19th-century scholar who explored the story in his book The Vegetable Lamb of Tartaria: A Tradition and Its Interpretation. 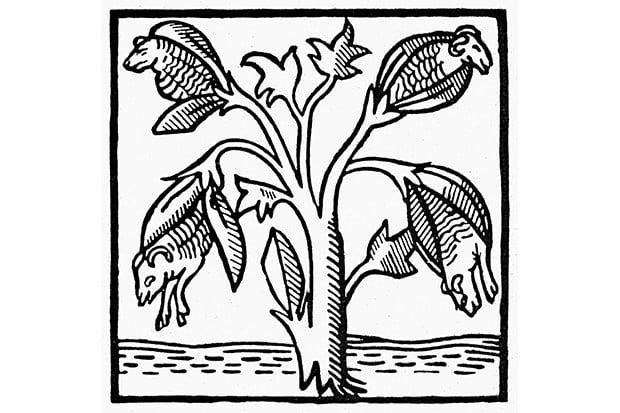 Rabbi Yochanan’s description remains surprisingly consistent in all references to the plant from which the lamb grows. Obviously people saw something.

Some writers, such as Sir John Mandeville, who lived in the 14th century, even claimed to have tasted the meat of this hybrid of lamb and a plant called barometz.

In one of the ancient references to barometz, it is said that it tasted not like chicken, but fish, and was full of sweet blood. 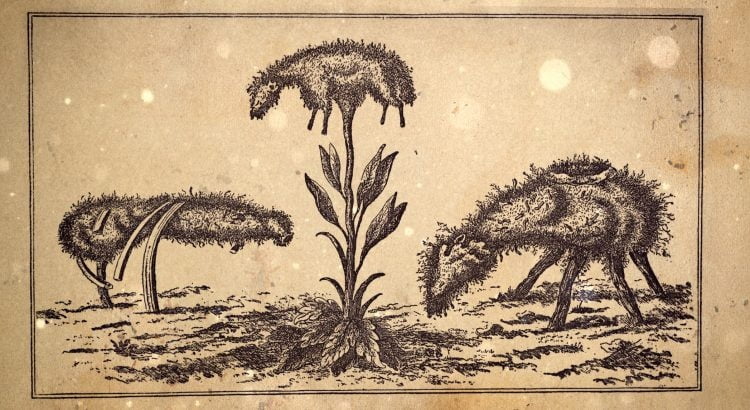 However, by the 16th century, enlightened thinkers of the Renaissance cast doubt on the existence of the Barometz, sometimes called the Scythian lamb – the inhabitants of Europe at that time called southern Siberia Scythia. 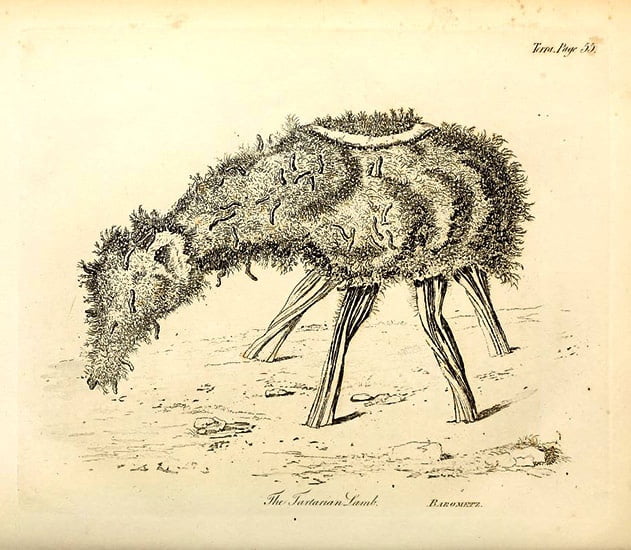 John Evelyn – The Sibyl: or, Discourse on the Trees of the Forest (1825 edition)

“This vegetable is called the Tartar lamb, as it is similar in shape to this animal. It usually has four leg-like stems and its body is covered in brownish down.

Travelers report that he will not tolerate any vegetables growing at a certain distance from his place. -Mr. Bell in his “Report on the Journey from St. Petersburg to Isapahan” informs us that he searched in vain for this plant in the vicinity of Astrakhan”

As time went on and more was learned about the general physiology of warm-blooded animals, many were skeptical that any mammal could sprout from the ground like a plant.

So were the people who claimed to have seen a Tartar vegetable lamb lying, or were they simply observing something alien to their Western European worldview? 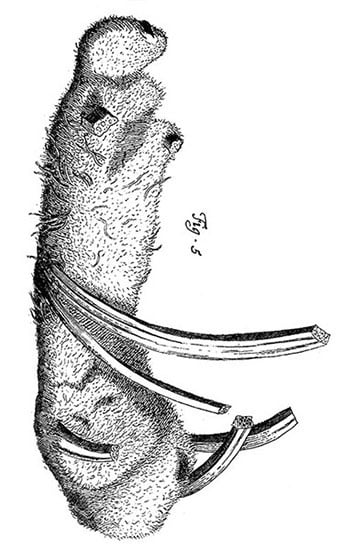 “Figure 5 shows what is commonly, but incorrectly, called the Tartar lamb in India. It seems to have been shaped by the artists to imitate the lamb, the roots or ascending part made to look like the body, and the preserved foot stems to look like the legs.

I was assured by Dr. Brown, who made very good observations in the East Indies, that he was told there by those who lived in China that this down or hair of the plant is used by them to stop bleeding in fresh wounds, like cobwebs with us, and that they have it in such great respect that few houses do not have it.”

Maybe it was cotton?

Originating in India and spreading along the Indus Valley, cotton was introduced to Greece in antiquity, and cotton itself has been described from time immemorial as a fleece-like material, according to Clinton’s mid-19th-century text, A History of Silk, Cotton, Linen, Wool, and Other Fibrous Substances. G. Gilroy. 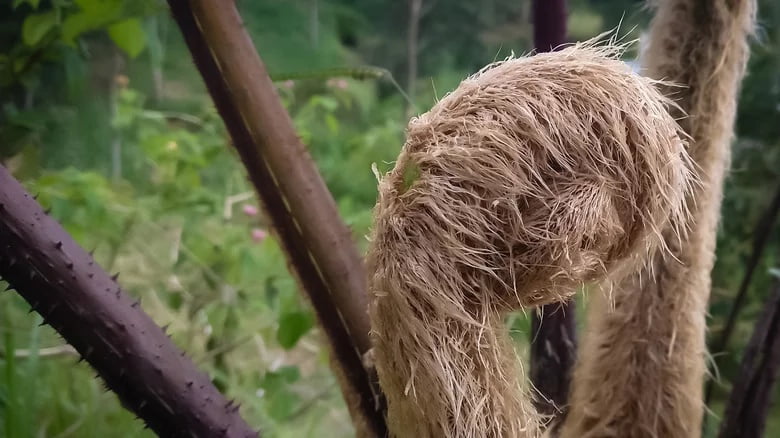 Another explanation could be Cibotium barometz, or wool fern (pictured), originally from China, bearing a striking resemblance to a sheep on a branch. In any case, none of these plants grew in Western Europe during the medieval period.

It is difficult to say what exactly led medieval people to the idea that somewhere in the world lambs grow on trees.

Moreover, this statement came not from one, but from many scientists, travelers and naturalists who not only personally saw it, but even tasted it. 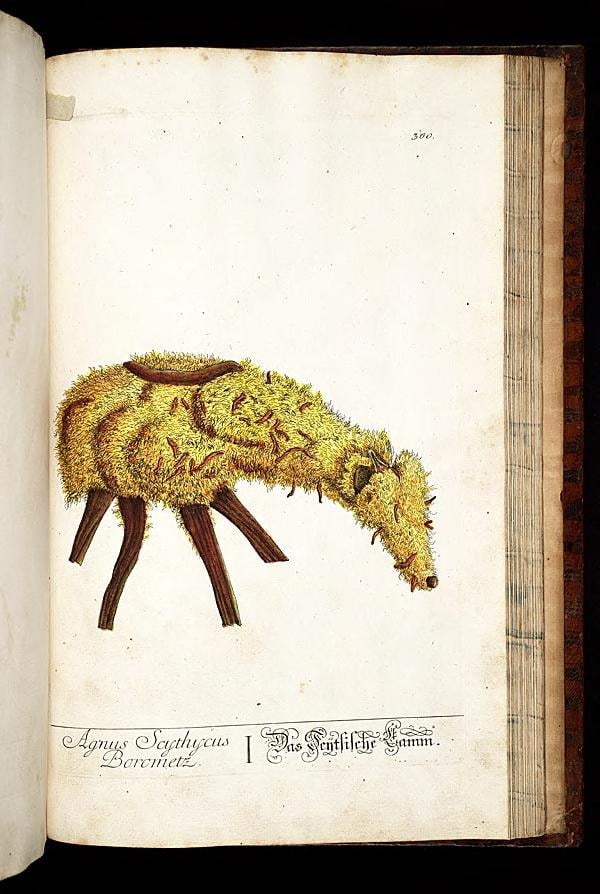 “What the ancient writers told about this lamb plant – they believed that from a seed similar to a melon seed, grass grows in the form of a young lamb, the stem of which is a kind of umbilical cord, and the ripening fruit contains under the outer thick woolen fur tender flesh.

Indeed, the researchers of nature exhibited this very fur in their offices, as if it had to come from this animal-plant.” 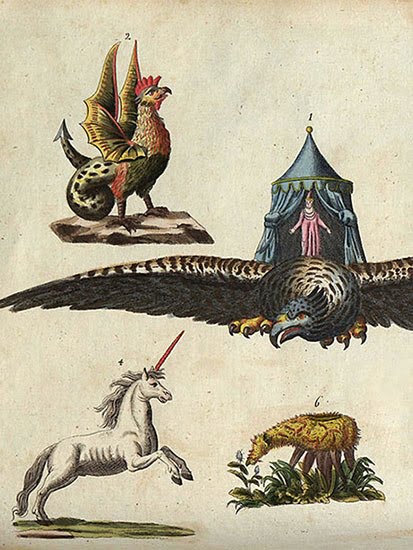 “At the beginning of our century, they still believed in this legend that in Tartaria and Scythia a wonderful plant grows in the form of a brown lamb on a stem that serves as a kind of umbilical cord.

This lamb feeds around itself with all the herbs that it can reach, and then dies and dries up when it has no more food.

Actually, the baromets or Scythian lamb is a thick, full moss that grows in large piles, and sometimes, as in the form depicted here, as a parasitic plant on a tree fern in Tartaria, which looks yellowish brown .” 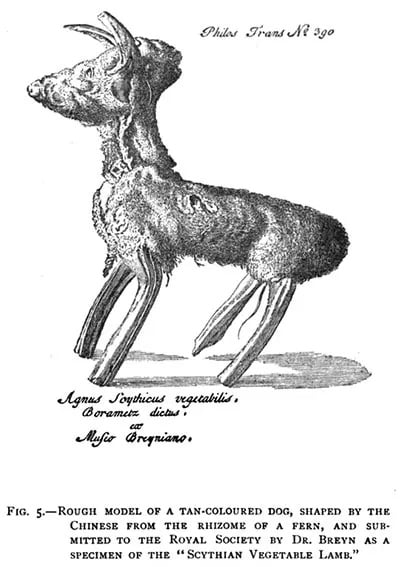 Cibotium barometz, whose specific epithet “barometz” is a Tartar word meaning – yes, that’s right – “lamb”. For a long time it was believed that this is a zoophyte, that is, an animal-plant, and this explanation raises more questions than answers. What was this vegetable lamb?

In 1624, Edward Smythe wrote a striking account of the Vegetable Lamb, although this description was not the purpose of his article; rather, he was interested in registering the “rarity and value” of an item held in the Oxford library, that is, a long cloak of Vegetable lamb, owned by Sir Richard Lee, who in turn received it from the King of Sweden.

So, before this garment came into being, first there was the Tartar lamb, which Smythe describes as follows:

“There… out of the ground sprouted certain living creatures in the form of lambs, which had wool very similar to the wool of English lambs, like this:.., out of the ground grew a stalk like an artichoke stalk, and on top of it – a kidney, which gradually took the form of a lamb and became a living being, leaning on the stalk with her navel, and as soon as she came to life, she fed on the grass growing around her, and when she ate all the grass within her reach, she died.

And then the people of the country, when they find these lambs are torn off their skins, which they preserve and cherish, considering them to be an excellent benefit and virtue, especially against the plague and other unpleasant diseases of those countries.

This incredible description shows that the names of this plant were not just metaphors, but rather literal descriptions.

Vegetable lamb is a lamb that grows out of the ground like a plant. It is attached to a stem like an artichoke, and according to Smythe and others, as soon as the vegetation around it was eaten, it immediately died.

The earliest references to this plant date back to the fourteenth century. In Sir John Mandeville’s Travels, there is a story about a lamb that is similar to Smythe’s, only instead of judging its wool, the author praises its fruit – the lamb – “everyone thought it wonderful.” 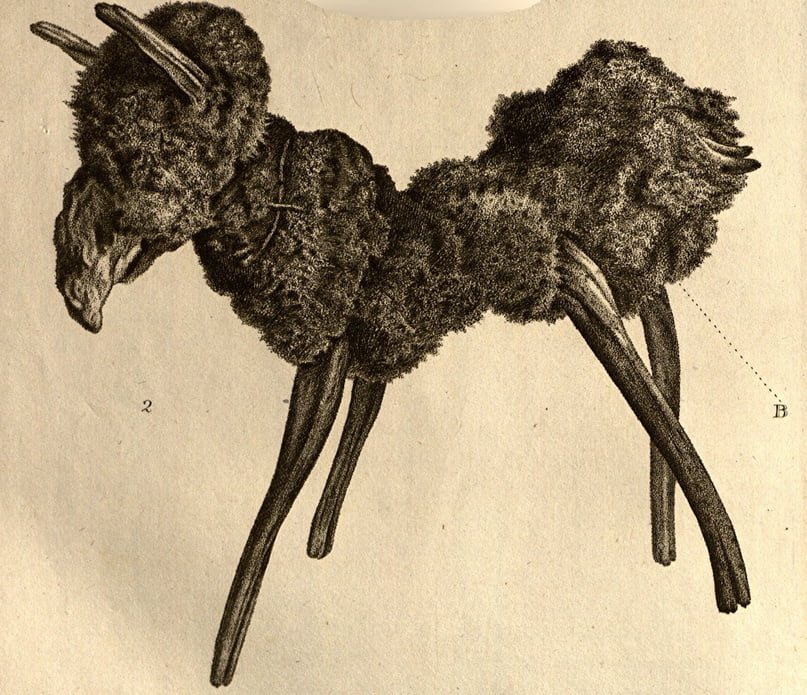 Is the cotton plant the origin of vegetable lamb?

While this hypothesis is certainly plausible, it is by no means undeniable. Richard Mabey reminds us that Lee had an ambiguous interest in the cotton plant, as he ends his myth-busting work with “an impassive plea for Britain to preserve India and the vast wealth that its cotton plantations represent.”

Maby also doubts that the cotton plant was so unfamiliar to Europe at the time the myth arose to justify the vegetable lamb myth.

If nothing else, then it is entirely possible that the Tartar Lamb may have come from more than one plant, which only adds to the mystique of an already enigmatic plant or group of plants.