(ORDO NEWS) — In 2017, a team of researchers discovered an amazing species of fanged marine fish whose bite is not only venomous, but also causes the victim to…drug intoxication.

Dogfish (lat. Blenniidae) are a family of fantastically beautiful fish that look like characters from a movie about the carnival of deep sea vampires. There are many varieties of falcons, but among them the Fangbleny fish stands out, which responds to the threat in a very unusual way – by injecting an opioid toxin.

An international team of scientists set out to find out exactly how small fish produce venom because, unlike snakes and insects, poisonous fish have been relatively little researched.

Scientists have discovered an amazing property of the poison: the substance that the fish inject the enemy with a bite binds to opioid receptors – the very ones that respond to opiates. But the oddities don’t end there.

According to toxics research expert and author of the new study, Nicholas Caswell of the Liverpool School of Tropical Medicine, the fish had fangs before the venom glands developed.

Usually in nature, everything happens exactly the opposite: the animal first acquires the ability to poison prey, and all kinds of devices for quickly and efficiently delivering this poison to the victim’s circulatory system (fangs, needles , etc. ) develop after.

In total, there are 5 genera of Sobachkovs, of which only one is poisonous. These fish do not use their fangs for catching prey – they feed on plankton and algae, and long teeth are needed solely as a means of scaring away and defending against predators. For their work, Caswell and his colleagues used various microscopic scanning techniques, as well as analyzed the genome of animals and isolated various types of proteins and peptides from the poison, decomposing them in a gel medium using an electric current.

According to a study published in 2017 in the journal Current Biology , the venom contains enkephalins, proteins that activate opioid receptors. That is, fangbleny literally injects the attacking predator with a strong dose of the drug.

Caswell explains that opioids have previously been found in poisons, in particular in scorpion venom, but the team did not expect to find them in fish.

Their venom does not cause blood to clot, but it greatly reduces blood pressure, which is why predators tend to avoid small fish.

In addition to opioids, the substance emitted by fangbleny contains many other compounds, including neurotoxins and irritants that cause burning.

But even without venom, the Felidae can use their fangs quite effectively for defense, and their bony crests make it difficult for larger predators to catch their prey in their mouths.

Perhaps in the future, after a more complete study of the chemical composition of the poison, its components may be useful in the pharmacological industry. 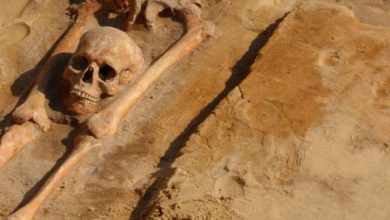