(ORDO NEWS) — It turns out that tiny mineral grains can tell us about Earth’s place in our galaxy.

Chris Kirkland, professor of geology at Curtin University, and Phil Sutton, senior lecturer in astrophysics at Lincoln University, presented their views on how the solar system moves in our galaxy.

Many rocks on Earth are formed from molten or semi-molten magma. It is formed either from the mantle or from old pieces of pre-existing crust. As liquid magma cools, it eventually turns into solid rock.

Through this cooling process of magma crystallization, the mineral grains grow and can trap elements such as uranium, which decay over time and create a kind of stopwatch that records their age.

Crystals can also trap other elements that track the composition of their parent magma, such as how a family name can track a person’s family.

Using these two pieces of information (age and composition) we can reconstruct the chronology of the formation of the earth’s crust.

We can then decipher its fundamental frequencies using Fourier transforms. This tool basically deciphers the frequency of events, similar to deciphering the ingredients that went into a cake blender.

Using this approach, scientists have discovered a 200-million rhythm of crust formation on the early Earth.

The solar system and the four spiral arms of the Milky Way revolve around the supermassive black hole at the center of the galaxy, but they move at different speeds. 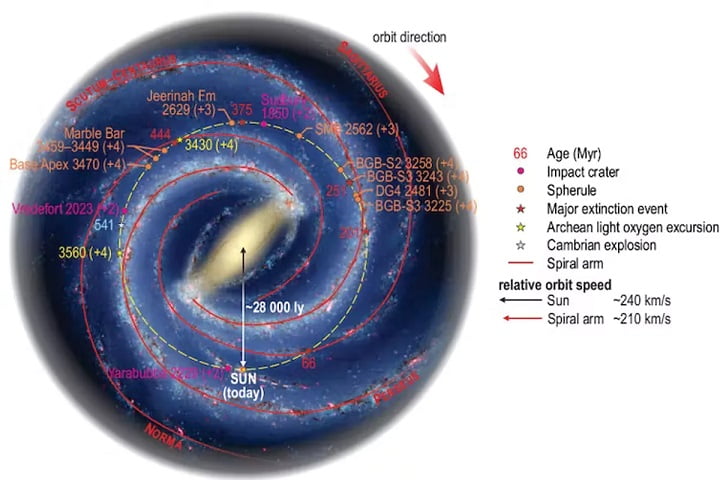 This model shows a period of 200 million years between each entry of our solar system into the spiral arm of the galaxy.

According to the researchers, there is a possible relationship between the time of formation of the earth’s crust on Earth and the time it takes to rotate through the spiral arms of the galaxy.

Scientists believe that in the remote corners of the solar system there is a cloud of icy rocky debris (Oort cloud) that revolves around the Sun.

Because the Solar System periodically enters the spiral arm, interactions between it and the Oort cloud are expected to force material out of the cloud, sending it closer to the inner Solar System. Some of this material may even fall to Earth.

The Earth experiences frequent impacts from rocky bodies from the asteroid belt , which on average reach speeds of 15 km per second. But comets ejected from the Oort cloud arrive much faster, 52 km per second on average.

Scientists say that it is these periodic high-energy impacts that are tracked in the records of the formation of the earth’s crust, stored in tiny mineral grains.

Comet impacts excavate vast volumes of the Earth’s surface, resulting in decompression melting of the mantle. This molten rock, enriched in light elements such as silicon, aluminium, sodium and potassium, floats in a denser mantle.