(ORDO NEWS) — American researchers analyzed the evolution of the key enzyme of photosynthesis, the Rubisco protein complex. This made it possible to predict the structure of the ancient ancestor of the complex and synthesize it from scratch, demonstrating the best performance.

The results of the study will increase the yield of many agricultural crops in order to feed the projected nine billion people of the Earth by 2050.

The mechanism of its work arose more than 2.5 billion years ago, even before the global event of saturation of the Earth’s atmosphere with oxygen, known as an oxygen catastrophe.

In those days, the enzyme did not need to distinguish carbon dioxide from oxygen, because the latter was practically absent in the atmosphere, so Rubisco was strictly specific and bound only the CO 2 molecule .

However, as the level of oxygen in the atmosphere increased, it turned out that Rubisco was also able to bind the O 2 molecule , which is why even modern photosynthetic organisms retained the ability to photorespire – a process, in fact, the reverse of photosynthesis.

To reduce the influence of photorespiration on the efficiency of photosynthesis, evolution increased the specificity of Rubisco to carbon dioxide, and also created mechanisms for the preliminary concentration of CO 2 in some plants.

Over the past 20-30 million years, the level of carbon dioxide in the atmosphere has finally fallen and did not rise above 300 parts per million until the 1950s. Photosynthetic organisms adapted to such conditions and adjusted the parameters and structure of the Rubisco enzyme as needed.

Now that human activity has increased carbon dioxide levels to 420 parts per million in less than a hundred years (and continues to do so), scientists have the idea of ​​adapting plants to new conditions to increase their yields through genetic engineering.

Employees of Cornell University (USA) conducted a deep phylogenetic analysis (a kind of analysis of a pedigree or family tree) of the structure of the Rubisco protein complex in the nightshade family, which includes many crops: potatoes, tomato, eggplant, tobacco and others.

The analysis predicted the structure of the ancestral enzyme Rubisco, which probably worked in photosynthetic organisms 20-50 million years ago, when atmospheric carbon dioxide levels could reach 800 parts per million. 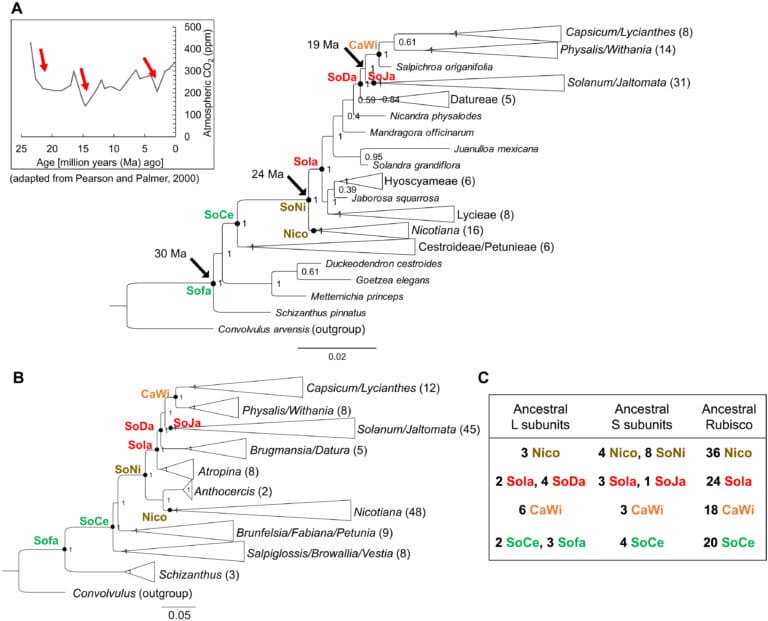 Simplified phylogenetic trees for two subunits of the Rubisco complex. The inset shows the change in carbon dioxide levels in the Earth’s atmosphere over the past 25 million years (until 2000). The current level of carbon dioxide has already risen to 410-420 parts per million (ppm)

More precisely, 98 such ancestral structures were predicted, which were then synthesized and determined the effectiveness of their enzymatic work. For a number of predicted options, it turned out to be noticeably higher (up to 28%) than for the usual current Rubisco.

Thanks to this, scientists have identified promising candidate enzymes that could be introduced by genetic engineering into modern agricultural crops, making photosynthesis more efficient and, as a result, increasing their yield.

“For the next step, we want to replace the genes for the existing Rubisco enzyme in tobacco with these predicted ancestral sequences using CRISPR gene editing technology, and then study how this affects biomass production.

Of course, we hope that experiments will show that by adapting Rubisco to modern conditions, we will get plants that give larger yields, ”summed up Cornell University professor of molecular biology and genetics and senior author Maureen Hanson ( Maureen Hanson ).

f the method proposed by the authors is successful, these effective ancestral sequences of the Rubisco enzyme could be transferred to crops such as tomatoes and potatoes, as well as to plants from other families such as soybeans and rice.