(ORDO NEWS) — Austrian researchers, using the example of a small sample of people who became infected with the omicron strain – vaccinated and unvaccinated, as well as previously ill, checked how much their blood plasma is able to neutralize other variants of SARS-CoV-2.

Scientists from the Institute of Virology at the Medical University of Innsbruck (Austria) conducted a small study during which they evaluated the neutralizing ability of the blood plasma of patients with Covid-19 caused by the omicron strain against other variants of SARS-CoV-2: D614G, which appeared at the beginning of the pandemic, ” alpha ” (“British”), “beta”, “gamma” (“Brazilian”), ” delta ” and the very same “omicron” (BA.1).

Blood plasma samples were collected between five and 35 days after a positive PCR test for the omicron strain. Participants were divided into four groups – in accordance with immunity before infection: the first category included 15 vaccinated people who had not previously had Covid-19; in the second – 13 unvaccinated, also not faced with the virus; in the third – 10 who had an injection and had previously been ill (but Covid-19 was not provoked by “omicron”); in the fourth – 13 people who were ill (not BA.1), but were not vaccinated.

The highest levels of neutralizing antibodies to all of the above strains were found in those who were vaccinated and subsequently infected with Omicron, as well as in those who were not vaccinated, but had previously had Covid-19 caused by another variant of the virus.

“On the contrary, the blood plasma of “naive” unvaccinated people after infection with BA.1 mainly contained neutralizing antibodies only to BA.1 and occasionally to other variants,” the scientists write.

The titers of immunoglobulins to “omicron” were lower compared to the levels of IgG to other strains in study participants who had just been vaccinated. However, their rates were comparable to unvaccinated individuals who recovered from Covid-19 caused by D614G — a strain that originated in China in early 2020 and spread to Europe — or “delta” followed by BA.1 infection. 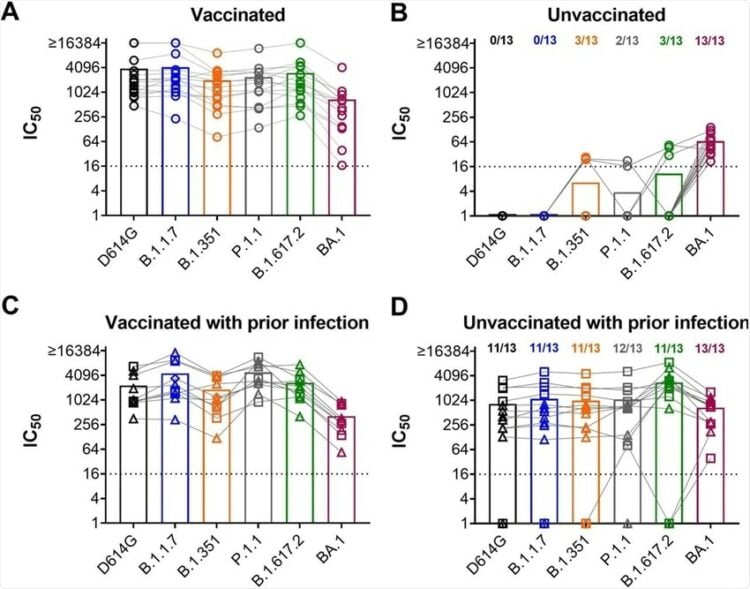 “Strikingly, two unvaccinated individuals had antibodies to the omicron and gamma strain despite a previously positive PCR test without any symptoms for the delta variant (B.1.617.2) two months prior to re-infection. Since the blood plasma of these people did not neutralize B.1.617.2 or most other variants except for omicron, the test result for B.1.617.2 could be a false positive, ”the researchers add.

Since the levels of IgG in people without previously acquired immunity (not sick and not vaccinated) were significantly lower than in other groups, scientists believe that unvaccinated people who encountered only “omicron” are not sufficiently protected from other strains and should be injected. After all, it cannot be said that BA.1.