(ORDO NEWS) — According to oral tradition, a huge snake coiled around the hills on the island of Palau and pressed terraces into the ground with its body.

An international team of scientists has found a reasonable explanation for the unusual shape of the pyramids. It turned out that the unusual terraces were created by hand by generations of local residents.

And they were used to grow vegetables and fruits, as well as burial sites, according to the Archeology News Network.

In Oceania, monumental buildings from prehistoric times are widespread, including the famous stone figures on Easter Island. The early cultures of Oceania often significantly altered the landscapes of the islands. Around 500 BC similar processes could begin in Palau.

“The effort expended on the creation of earthen ramparts is comparable to the construction of the pyramids in Egypt or South America. For generations, humans have had to move millions of tons of soil.

Despite the fact that the builders had almost no tools for the job. And if they were, they were made of stone, bone or wood,” says Dr. Andreas Mieth, one of the three project leaders.

Using geoarchaeological methods, a group of soil scientists, paleoecologists and archaeologists have unraveled the mystery of the construction of the terraces.

As a basis, the builders used weathered volcanic rock interspersed with a large amount of ceramics. The upper layers consisted of humus soils. Traces of planting holes in the humus layers suggest extensive gardening on terraces.

“From a technical point of view, the work was done very well,” said Professor Hans-Rudolf Bork, co-leader of the project. 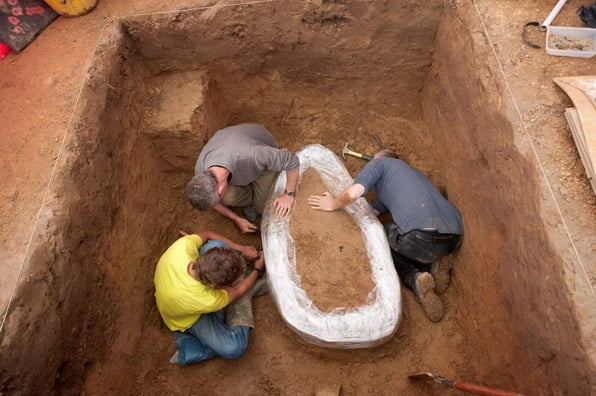 But the peaks on some earthworks, reaching ten meters high, had a completely different function than the terraces, which were used mainly for gardening. On one of them, scientists managed to find six skeletons in a complex burial.

“This is a sensational find and is unique in Palau’s artificial hills to date. Such well-preserved graves have never been found there, because bones usually decompose very quickly in acidic soils,” said Dr. Annette Kühlem.

The discovery has great scientific potential for specialists. For the first time, they can figure out the details of a local prehistoric burial and compare it with today’s burial practices.

“Thanks to the well-preserved skulls, there is hope that it will be possible to carry out DNA analysis and therefore analysis of relationship with the population living in the area today,” Dr. Annette Kühlem explained.

The participants of the project believe that only representatives of the elite were buried on the intricately laid and molded tops of earthen ramparts. Thus their social status was emphasized even after their death.