(ORDO NEWS) — 36.4 percent of 214 patients with COVID-19 observed in Wuhan had seizures, encephalopathy, encephalitis, Guillain-Barré and Miller-Fisher syndromes. Among seriously ill patients, there are more of them – 45.5 percent. One third lose their sense of smell and taste, have a headache, fatigue, nausea and vomiting. One of the characteristic symptoms is confusion. Moreover, some neurological conditions occur after recovery. All this suggests that the coronavirus affects the brain.

“I note a certain deterioration in cognitive functions: it is harder to concentrate, I began to forget more things that are scary, sometimes really important, periodically there is a feeling of a fog in my head,” – wrote on Facebook Alexey Fedorov, a cardiac surgeon from the Center for Cardiovascular Surgery at the Burdenko General Hospital recovered from COVID-19 a month ago. His sense of smell was only partially returned. In the comments, many have shared similar observations.

Information about various neurological and mental problems of patients with coronavirus infection has been accumulating since the very beginning of the epidemic. Obviously, the virus entered the brain, but by what means and what it damaged, it was unclear.

In April, Giuseppe de Santis of the Giovanni Panico Hospital in Tricase (Italy) published a discussion in a scientific journal about markers of brain inflammation in COVID-19. According to previously obtained data, coronaviruses can infect the central nervous system, and this leads to an immune response, the scientist wrote.

De Santis theorized that SARS-CoV-2 travels through the olfactory bulb – the region of the brain responsible for smelling – and reaches the brain stem, killing neurons. Inflammatory precursor molecules (cytokines) can trigger a violent reaction in the body – a cytokine storm – and damage the brain. That is why, according to De Santis, doctors should be prepared for the fact that the condition of patients with COVID-19 with loss of smell will worsen.

By that time, a large team of scientists from China had proven experimentally on cell cultures that the new coronavirus was capable of infecting neurons. In subsequent experiments, scientists showed that SARS-CoV-2 damages the cells of the olfactory bulb of hamsters, and the ACE2 receptor, which lets the infection into the body, is actively synthesized in the brain in the black body, which is responsible for motor function, the posterior cingulate and middle temporal gyrus of the cortex.

How can we test this on living neurons of humans? The researchers took the cells of an adult, chemically rejuvenated them, and then grew from them neurons, more precisely, whole organelles, which may well serve as an adequate model of the brain. They were infected with SARS-CoV-2 and, for comparison, SARS-CoV – the causative agent of SARS that caused an epidemic in Southeast Asia in 2002-2003. It turned out that the new coronavirus infects organelles and replicates in them, and penetrates directly into the cells of the cerebral cortex. This explains the loss of smell and taste, as well as other neurological symptoms in patients with COVID-19.

Moreover, the virus infects the brain stem cells themselves, which means that, penetrating into the patient’s olfactory bulb, where there is a population of neuronal stem cells, it also damages them. After that, the smells do not return immediately and only partially.

But this is all indirect evidence, but how can you directly verify that the coronavirus has entered the brain? Scientists from Germany conducted a large postmortem study of nerve tissues, taking samples from several areas of the brain and mucus from the nasopharynx from 33 deceased patients with COVID-19 aged 30 to 98 years. Some of them during illness noted confusion, intracranial hemorrhage, headaches, changes in behavior, acute cerebral ischemia. 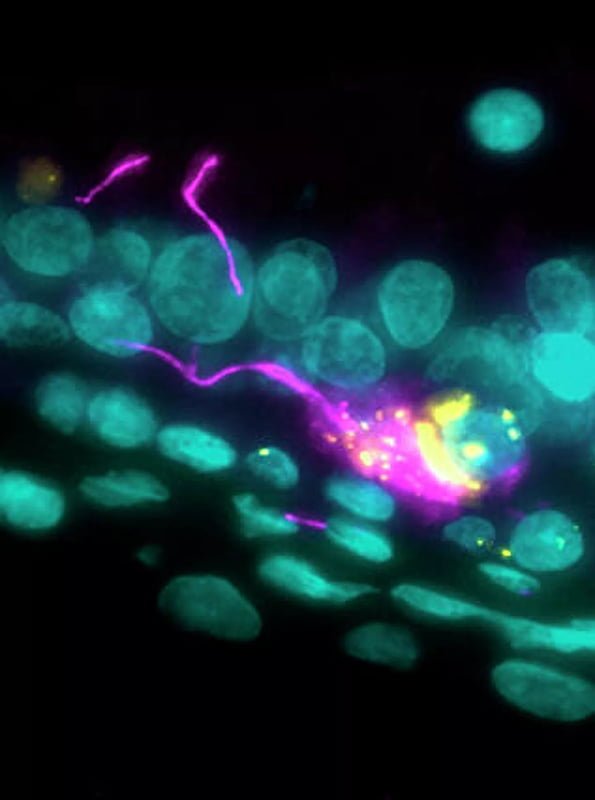 Of all the samples, the most viral RNA and spike protein, which the virus clings to the cell membrane, were found in the nasopharyngeal mucus. “This confirms that SARS-CoV-2 is able to use it as a gateway to the brain,” Professor Frank Heppner, one of the leaders of the study, told the press service of the Charite Medical University Complex.

Apparently, the virus spreads from the nasopharynx along the adjacent olfactory nerves, although other routes are possible, for example, blood. But the scientists emphasize that they analyzed the tissues of deceased critically ill patients who needed artificial ventilation. Caution should be exercised when transferring these results to mild to moderate patients.

What if countries did not introduce quarantine measures? New study reveals terrible alternative

What if countries did not introduce quarantine measures? New study reveals terrible alternative