(ORDO NEWS) — Large stars live for a relatively short time and perish in bright supernova explosions. These explosions scatter huge amounts of heavy atoms, radiation and energy through space. If a supernova happens to be close enough to the Sun, it can greatly affect what is happening on Earth. It is assumed that once such an event did not allow her to turn into an ocean planet.

Geophysicist Henrik Svensmark of the Danish Technical University (DTU) traced this influence in more detail, based on data on nearby supernovae that erupted over the past 3.5 billion years, and on the global movement of biomass during this period.

The work indicated a correlation between the number of such explosions and the amount of dead organic matter that is buried in sedimentary rocks. The scientist talks about this in a new article published in the journal Geophysical Research Letters .

Apparently, nearby supernovae affect the Earth’s climate due to the fact that particles of cosmic rays that have flown from them enter the atmosphere and can serve as “seeds” for the formation of clouds. Increased cloudiness creates more noticeable temperature differences between the equatorial and circumpolar regions.

This enhances atmospheric winds and sea currents, and with them the intensity of transport and mixing of nutrients, which plays an extremely important role in the global development of ecosystems. 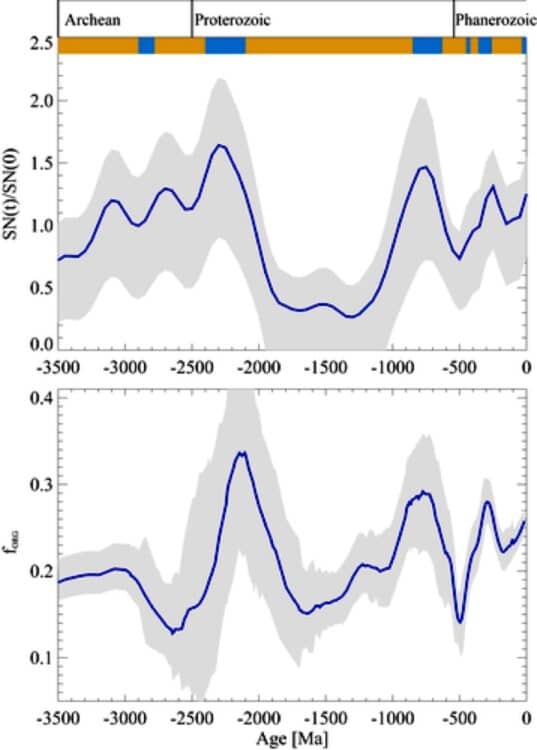 Enhanced mixing stimulates the productivity of living organisms, leads to the formation of more organic matter, and after their death – to a more intensive accumulation of such substances in sedimentary rocks. It was these processes that Henrik Svensmark traced, using previously obtained data on ancient supernovae.

The scientist assessed the burial of organic matter based on the results of studying ancient pyrite samples – more precisely, on the amount of organic impurities found in them, which can be determined by the ratio of carbon isotopes.

Both indicators have correlated well with each other over the past 3.5 billion years, including the last 500 million, for which more accurate data are available. The scientist summarized that on a geological time scale, the intensity of cosmic rays that come to Earth from nearby supernovae can vary by hundreds of percent and have a significant impact on the planet’s climate and its biosphere.