(ORDO NEWS) — Self-organizing pieces of human brain tissue grown in a laboratory have been successfully transplanted into the nervous system of newborn rats, a step towards finding new ways to treat neuropsychiatric disorders.

Three-dimensional stem cell-derived organelles resembling a simplified model of the human cerebral cortex are connected and integrated with surrounding tissue in each rat’s cerebral cortex, forming a functional part of the rodent’s own brain.

According to a team of researchers led by Stanford University neuroscientist Sergiu Pasca, this overcomes the limitations of plate-grown organoids and gives us a new platform for modeling human brain development and disease in a living system. 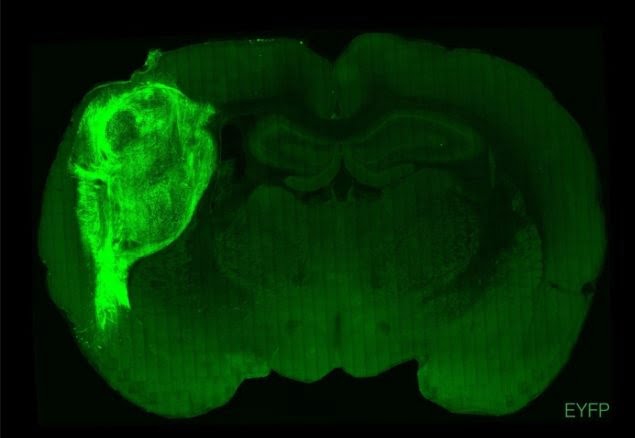 “Most of the work that my lab has done has been trying to understand mental disorders on a biological level so that we can actually find effective treatments,” Pasha explained.

“Many of these mental conditions, such as autism and schizophrenia, are probably unique to humans, or at least they are associated with the unique features of the human brain.

And the human brain, of course, was not very accessible, which hindered the progress we have made in understanding the biology of these conditions.”

In 2008, scientists made a breakthrough: brain cells grew from induced pluripotent stem cells. Mature cells derived from adults have been reverse engineered to return them to the “blank” state of stem cells, the shape that cells take before they grow into specialized cells like skin cells or heart cells.

These stem cells were then directed to develop into brain cells, which the scientists cultured to form clumps of brain-like tissue called organelles.

These models of key areas of brain anatomy, such as the wrinkled outer cortex, can be used to study brain function and development up close.

Pasha and his colleagues tried to transplant human brain tissue into the brains of newborn rats, whose own brains had not yet developed and matured.

Human cortical organelles were cultured in a dish and then transplanted directly into the somatosensory cortex (a region of the brain responsible for receiving and processing sensory information) of young rats that were only a few days old.

These rodents were then left to grow as adults for another 140 days (rats fully reach sexual maturity between 6 and 12 weeks).

The scientists then studied rats. They genetically engineered organelles to respond to simulated blue light by firing neurons when blue light hits them. This stimulation of human neurons was done when rats were trained to lick their spouts to get water.

Later, when the organelles were exposed to blue light, the rats automatically licked their lips, demonstrating a response not seen in the control groups.

This indicated that the organoid not only functioned as part of the rat’s brain, but could also promote reward-demanding behavior.

Another group of neurons in the organoid showed activity when the scientist pressed the whiskers of the rats, evidence that neurons can respond to sensory stimulation.

Brain cells grown from three human patients with a genetic disorder called Timothy’s syndrome have also been used for some organoids. Timothy’s syndrome affects the heart, fingers, and nervous system and usually results in early death.

After behavioral testing, the rats were euthanized and their brains removed and dissected, allowing researchers to observe organelle integration at the cellular level.

They found that the organoid neurons grew much larger than any neurons grown in a test tube, entering the brains of rats and forming networks with native rat neurons.

Neurons in Timothy syndrome transplant rats were less complex and formed different synaptic connections with surrounding brain tissue compared to control groups. This is a new discovery and could not be found in a brain organoid in a cup.

While the platform still has some limitations, the team believes it has the potential to become a powerful new tool for understanding brain development and disease.

“Overall, this in vivo platform represents a powerful resource to complement in vitro human brain development and disease research,” the authors write in their paper.

“We anticipate that this platform will allow us to identify new strand-level phenotypes in patient-derived cells that would otherwise be elusive and test new therapeutic strategies.”

Reincarnation : The incredible case of the Pollock twins

We exhale – the “judgment day” scheduled for September 24 is canceled

Reincarnation : The incredible case of the Pollock twins

We exhale – the “judgment day” scheduled for September 24 is canceled