(ORDO NEWS) — The mysterious whitish stains on the surface of the Moon, called “lunar vortices”, turned out to be not just random patterns on the surface, as selenologists used to believe.

It was possible to reveal their correlation with some topographical features of a particular area, and their origin is associated with the structure of local magnetic fields screening the solar wind. An article about this was published in the journal Geophysical Research Letters.

The swirls, which look like cream placed in coffee, can be of various sizes – from a few meters to more than 50 km.

They are present in a wide variety of places on the Moon, unrelated to any particular lunar rock composition, and are usually found on top of any other features on the lunar surface, including hills and craters.

However, scientists at the US Planetary Institute in Tucson have now succeeded in linking areas of such “whirlwinds” in one of the Moon’s basaltic plains – Mare Ingenii – with the local topography. 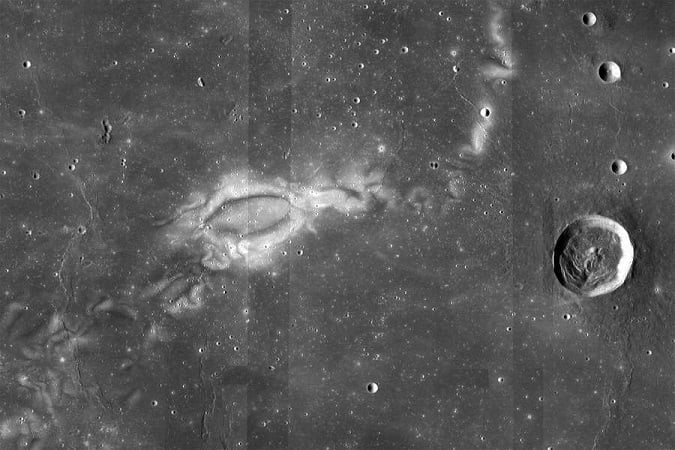 “For the first time, a correlation has been demonstrated between albedo — variations in the reflective characteristics of certain areas of the ground that form “eddies” — with topography,” says Deborah Dominguet, lead author of this study.

“Until now, it was believed that vortices are simply superimposed on the topography, and this was considered an important argument in favor of the fact that they are formed due to the shielding of the surface by the magnetic fields present in the vortices from the solar wind.

However, the correlation found indicates that their appearance also depends on other characteristics of the areas under consideration.”

Some of these features can be explained, for example, by differences in the fine-grained and coarse-grained components of the lunar soil, and not just by variations in “space weathering”.

It should be noted that such correlations have not yet been found in all cases, and the height difference between the brightest areas with “eddies” and the darker areas outside them is relatively small – 2.3-4.4 m.

However, the patterns can be traced quite reliably, and scientists cannot ignore them. Careful study of other eddy regions in the future may definitively clarify the existence of such correlations between regional topographic differences and eddy patterns, especially where these eddies occur on much steeper slopes or even climb impact craters.