(ORDO NEWS) — Parrot lovers are well aware of the fact how deftly these birds handle various objects using their paws and beak. Now we have managed to prove: parrots really use their head as an additional limb and are able to literally move on three “legs”.

Although no known vertebrate has or can have an odd number of limbs, many species use other parts of the body as a “third arm” or “fifth leg” (yes, despite the famous saying, sometimes even one is needed).

For example, spider monkeys move along branches by grabbing their tails, and cats and other predators often carry objects from place to place by holding them in their mouths.

Parrots are also well-known users of the “third leg”: they use their beak both in nature and in captivity. Although these birds often participate in experiments aimed at revealing their cognitive abilities, much less attention is paid to the locomotor abilities of parrots.

In particular, it has not yet been clear whether they use the beak as a full-fledged “limb” or solely to stabilize the body when moving, and all the work is done by the legs accustomed to such matters.

Scientists from the New York Institute of Technology College of Osteopathic Medicine (NYITCOM) decided to study this issue using pink -cheeked lovebirds ( Agapornis roseicollis ) and an inclined wall that the birds were asked to climb.

The angle of its inclination ranged from zero to 90 degrees, all movements of the parrots were recorded by two high-speed cameras, and the force created by the beak, hind limbs and tail of the bird at the moment of contact with the wall was recorded by the power platform.

Climbing the surface at an angle of 45 degrees, the parrots from time to time helped themselves with their heads, and when climbing a completely vertical wall, their beaks already made no less effort to move up than their paws.

As for the tails, their role in the movement of the bird was minimal, so you can’t call them the “third limb” – it was only an additional point of support. 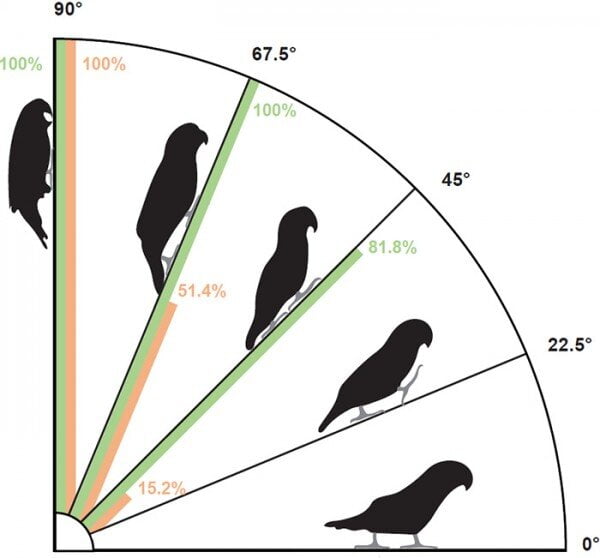 This behavior is also unique because today parrots are the only birds (if not vertebrates at all) that use the head as a “third limb”. This behavior likely required these birds to undergo significant muscle and nervous system modifications.

The authors of the study are going to continue studying the locomotor capabilities of parrots, hoping that such studies in the future will be able to help create new types of prostheses and develop robots that can climb vertical surfaces.

Scientists have learned about the reasons for the longevity of parrots

Interview with the parrots didn’t go according to plan

Scientists have learned about the reasons for the longevity of parrots

Interview with the parrots didn’t go according to plan