(ORDO NEWS) — Researchers studying the human remains of Pompeii have gained new information from the bones of a man and woman buried under a layer of volcanic ash from the eruption of Mount Vesuvius in 79 AD. e.

Thanks to genetics, it was possible to establish interesting facts of that time, according to the journal Scientific Reports.

Scientists managed to obtain ancient DNA, which is well preserved in bodies covered with time-hardened ash. These remains were discovered in 1933 by archaeologists in the so-called Artisan’s House.

They sat at the table as if they were having dinner at the moment of death. Anthropologist Dr. Serena Viva of the University of Salento said they looked like they weren’t trying to escape.

The researchers speculated that they stayed where they were due to their health condition. And this theory turned out to be correct.

Thanks to the latest laboratory technology, scientists have been able to extract a large amount of information from a handful of bone powder.

A genetic study showed that the man’s skeleton contained the DNA of bacteria that cause tuberculosis. This may indicate that he suffered this disease.

Among the symptoms are back pain and partial paralysis, so the ancient Italian could not physically cope with the urgent evacuation.

And from a fragment of bone at the base of his skull, it was possible to decipher his genetic code. He had the same group of genes that is usually found in the inhabitants of the island of Sardinia.

The head of the study, Professor Gabriele Scorrano from the Lundbeck Center for Geogenetics in Copenhagen, noted that much more information about that time could be learned during the biological research of Pompeii.

Recall that in March it became known that a robotic dog would be on duty in the archaeological park of Pompeii. He will track changes in buildings and study underground tunnels. 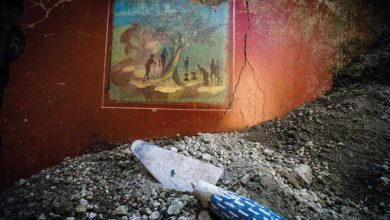