(ORDO NEWS) — Researchers from the Czech Republic and the USA put forward an original hypothesis of the origin of ice at the lunar poles.

They believe that water molecules from the atmosphere of our planet flew to the Moon on the tail of the Earth’s magnetosphere.

There is water ice on the moon. There are many special ones at the South Pole. Therefore, it is there that they plan to place a lunar base in the future.

Even after the first astronauts and automatic stations visited the Moon, scientists were sure that the surface of our satellite was absolutely dry and water could not exist there in any form due to extreme temperatures and the harsh conditions of the space environment.

But in 1976, about 0.1 percent water was found in samples of lunar regolith delivered by the Soviet Luna 24 probe.

And in the 1990s, the American spacecraft Clementine and Lunar Prospector, which carried out remote studies of the surface of the Moon using radio and spectrometric methods, revealed accumulations of water ice in permanently shadowed craters at the poles.

In 2008, the Indian Space Research Organization sent the Chandrayaan-1 orbiter to the Earth’s satellite. On board were the M3 spectrometer (Moon Mineralogy Mapper), capable of identifying water molecules by their emission spectrum, and the Mini-SAR radio frequency radar, which can distinguish water ice from water in the form of hydroxyl groups in solid minerals.

The Indian probe has counted more than 40 craters near the Moon’s North Pole, which scientists estimate contain about 600 million metric tons of water ice. At the South Pole, even more – there the ice covers 22 percent of the surface.

Hundreds of polar craters are in constant shadow due to the slight inclination of the Moon’s axis to the Sun – one and a half degrees (for the Earth – 23.4). The sun never rises above their edges, and at the bottom the temperature is about minus 250 degrees Celsius.

In 2020, the same Chandrayaan-1 found accumulations of hematite (iron oxide, which looks like rust, which forms only in the presence of oxygen and water). And beyond the ice accumulations at the poles.

Until recently, it was believed that asteroids and comets brought water to the Moon in the early stages of its history, about 3.5 billion years ago, during the so-called late heavy bombardment. The solar wind was considered as an alternative.

The particles of ionized hydrogen that make it up can theoretically form water when interacting with lunar soil.

Computer models showed that up to half of it should evaporate every month during a full moon, when the moon passes through the Earth’s magnetotail. At this time, the magnetic field blocks the solar wind, and its particles do not reach the lunar surface.

However, last year, scientists analyzed data from the Chandrayaan-1 probe and found that after the passage of the magnetospheric plume, the volume of lunar ice does not decrease – on the contrary, it increases.

It was assumed that this is due to the “terrestrial wind” – the flow of magnetospheric oxygen and hydrogen ions that can combine into water molecules.

In 2007, Japan’s Kaguya lunar satellite discovered that oxygen from Earth’s upper atmosphere could travel “on the tail of the magnetosphere” to reach the Moon.

According to the results of magnetometric observations of satellites of the NASA THEMIS-ARTEMIS project, the researchers separately estimated the number of solar and “terrestrial” wind particles. It turned out that the maximum of terrestrial particles falls precisely on the full moon.

Scientists explained it this way: once a month, the magnetosphere of our planet, shielding the flow of the solar wind, creates a “water bridge” through which ionized particles torn from the ozone layer of the earth’s atmosphere fly to the moon.

The ions move along the magnetic field lines, which, bending around the satellite, go further into interplanetary space. How the particles manage to escape from magnetic fluxes and settle on the lunar surface, the authors of the study did not find out. 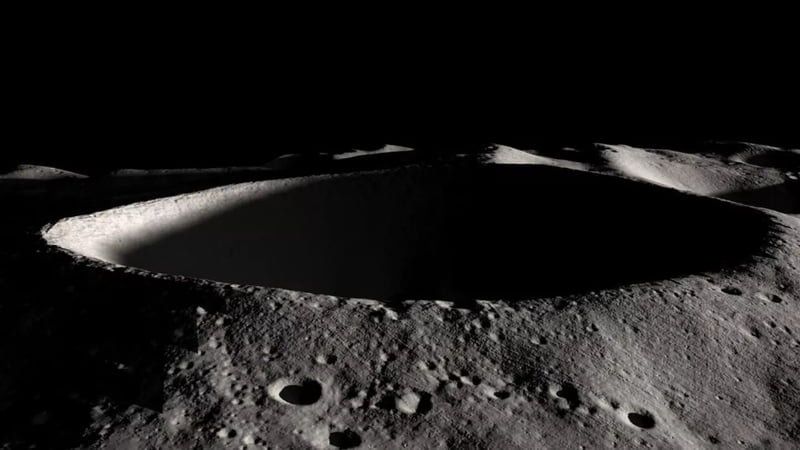 Through the breaks in the magnetic lines

Recently, geophysicists from Charles University in Prague and the University of Alaska at Fairbanks put forward such a hypothesis.

Our planet orbits in a bubble of magnetic field that bursts from behind, forming a plume. The moon passes through this tail once a month, on a full moon. The lines of force at the leading edge of the magnetosphere are closed, while at the tail they are open and go to infinity.

But if a sufficiently massive body (in this case, a satellite of the Earth) appears on their way, they deviate, become entangled and partially close again. In this case, part of the ionized particles is deposited on the surface of this body.

It has been calculated that over billions of years, the Moon’s polar regions could accumulate up to 3,500 cubic kilometers of water ice. This is comparable to the world’s eighth largest Lake Huron in North America. Moreover, provided that only one percent of the ions leaving the Earth reaches the Moon.

Scientists from the University of Arizona believe that thanks to the magnetic field, water not only hit the surface of the satellite, but has survived to this day. Even despite the destructive effect of the solar wind, which, unlike light, easily penetrates the shaded areas of the craters.

True, in this case we are not talking about the Earth’s magnetosphere, but about local magnetic anomalies near some large craters. They were identified and mapped by the Kaguya probe in 2007-2009. The researchers think the remanence is due to the iron-rich material of the cratered asteroids.

And although these magnetic fields are thousands of times weaker than the earth’s, they are quite enough to deflect streams of ionized particles of solar plasma from the ice deposits.

According to the authors of the work, water ice can be located not only at the bottom of lunar craters, but also form a layer of subsurface permafrost in the polar regions. This is indicated by the results of gravimetric studies. Scientists believe gravity anomalies detected by NASA’s Lunar Reconnaissance Orbiter are evidence of ice-saturated rocks.

Next year, the US space agency plans to send the VIPER (Volatiles Investigating Polar Exploration Rover) lunar rover to the South Pole. The rover will be equipped with a meter-long drill and instruments that can analyze the composition of the soil right on the spot.

Location for the lunar station

Based on the results of the work of the VIPER lunar rover, NASA will finally determine the place for the future station, which, in accordance with the Artemis program, should appear on the Moon before the end of the decade. Russia and China have similar plans.

All projects are oriented towards the South Pole, although it is easier to fly to the orbital station and back from the equatorial zone. But it is precisely in the southern polar region that the deposits of ice are concentrated, which is necessary for obtaining water, oxygen for breathing and hydrogen for rocket fuel.

In addition, there are the so-called peaks of eternal light – the peaks, constantly illuminated by the Sun, on which you can put solar panels.

The most likely place for the construction of the station is the Shackleton crater with a diameter of 21 kilometers, almost at the very South Pole. There are several potential landing sites nearby.