(ORDO NEWS) — In 2018, NASA astronomers discovered the first evidence of water ice on the Moon. Hiding for millions of years at the bottom of the Moon’s craters, the ice has been preserved, untouched by the sun’s rays.

Previous analysis of the Moon’s surface has shown some ice reserves at the North and South Poles.

Lunar patches of ice could give scientists valuable clues about the composition and activity of the moon and other icy bodies in the solar system, scientists say.

Ice on the Moon could also be an important resource for space travel, for example, turning it into rocket fuel could enhance future deep space missions.

However, in the process of searching for water, scientists were faced with another mystery. Despite the fact that the polar craters are protected from direct sunlight, they are not at all protected from the solar wind, waves of charged particles.

“This ionized wind is very erosive and should have broken up the ice a long time ago,” said University of Hawaii planetary scientist Paul Lucy.

Unlike the Earth, the Moon does not have a magnetic shield to protect it from charged particles. 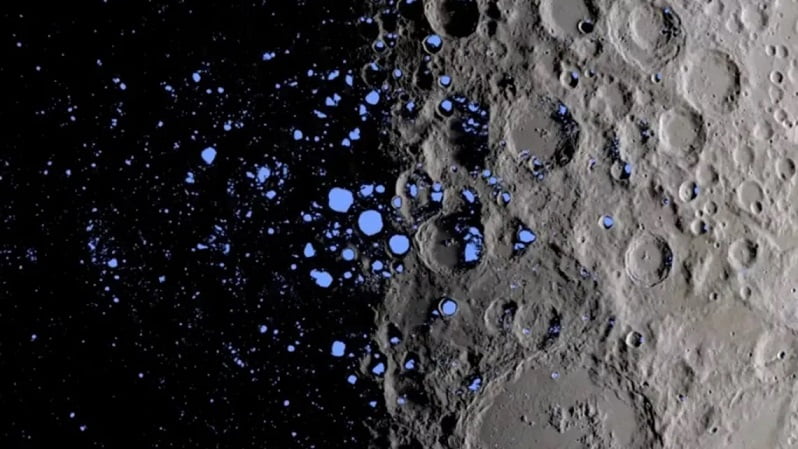 Scientists from the University of Arizona have presented a map of anomalous regions at the South Pole of the Moon, where unusually strong magnetic fields are present.

According to NASA, these anomalies were first discovered during the Apollo 15 and 16 missions in the 1970s. These patches are the remnants of the moon’s ancient magnetic shield, which likely vanished billions of years ago.

The magnetic anomalies are overlapped by several large polar craters that are in permanent shadow and may contain ancient ice deposits.

These anomalies could serve as small magnetic shields that protect lunar water ice from constant bombardment by the solar wind, the researchers say.

“These anomalies can deflect the solar wind,” said University of Arizona planetary scientist Lon Hood . “We think they can be very important in protecting permanently shaded regions.”

On the resulting map, the researchers saw that the magnetic anomalies were overlapped by at least two permanently shadowed Shoemaker and Sverdrup craters at the Moon’s South Pole.

Although these anomalies have only a fraction of the strength of Earth’s magnetic field, they are capable of “significantly deflecting ion bombardment,” the researchers say.

Traces of the presence of US astronauts found on the moon

Traces of the presence of US astronauts found on the moon