(ORDO NEWS) — Researchers have found that giant hornets can be lured into traps using sex pheromones, according to a new study published in the journal Current Biology.

Professor Nye’s team has created a series of traps that use sex pheromones to attract male hornets.

According to Professor Nye, pheromones are chemicals that are produced to convey information within a species.

Male hornets are attracted to the female hornet’s sex pheromone, so the researchers used their own blends of synthetic pheromones along with the natural female Vespa mandarinia sex pheromone to test which traps would work best.

Each trap was rigged with a dummy female hornet to attract males, Professor Nie said.

“The hornets would be attracted and fly around the traps, but none of them would land unless there was something that looked like a female hornet,” he explained.

After planting them near hornet colonies in China‘s Yunnan province, the researchers found that the queen-equivalent pheromone was the most successful. It is made from hexanoic acid, octanoic acid and decanoic acid, the study says.

According to the study, the trap captured more than 16 times more hornets than a pheromone-free trap.
By leaving the traps for one day, the scientists were able to capture thousands of hornets, Professor Nie said. 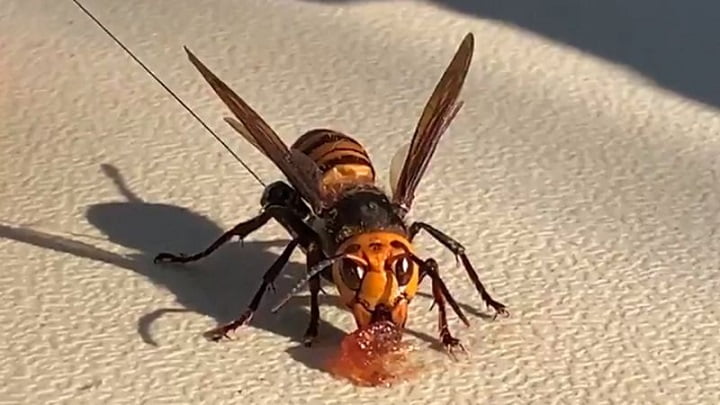 The researchers used sticky mousetrap-like materials, allowing other scientists to recreate them and use them on hornets across North America, Prof Nie said.

The chemicals can also be easily purchased from U.S. chemical suppliers, making this trapping method even easier to implement, he added.

While it’s an effective method of capturing large numbers of giant hornets in a short amount of time, it may not be an ideal system, said Allen Gibbs, a professor in the Department of Life Sciences at the University of Nevada at Las Vegas, who was not involved in the study.

“This method attracts males, but if they have already mated, the females are free to fly away and establish a new colony,” he said.

In addition, hornets only mate for a few months in the fall, so the trapping method can only be implemented during that time, Professor Gibbs noted.

Why Asian hornets may soon call the UK home

Why Asian hornets may soon call the UK home