US, WASHINGTON (ORDO NEWS) — Scientists from the Los Alamos National Laboratory of the United States (LANL) published a report on this on the BioRxiv preprint portal . Researchers warn: if the coronavirus does not weaken over the summer, like seasonal flu, this can be unpleasant.

The new strain began to spread throughout Europe in early February, and then migrated to other parts of the world, including the United States, and by the end of March became the global dominant form of the virus. If the mutations continue at the same speed and the infection becomes easier, this could threaten the vaccines currently being developed.

It is worth emphasizing that the work has not yet been reviewed, but the researchers noted that the news about the mutation was “urgent.” To date, more than 100 vaccines to prevent Covid-19 are under development.

“This is hard news. But please, do not be discouraged, ”says Bette Corber, lead author of the work, bioinformatics. – Our team at LANL was able to document this mutation and its effect on [virus] transmission only thanks to the tremendous global efforts of clinicians and experimental groups who sequence new virus mutations (SARS-CoV-2) in their local communities and make [this data] available as fast as possible.” 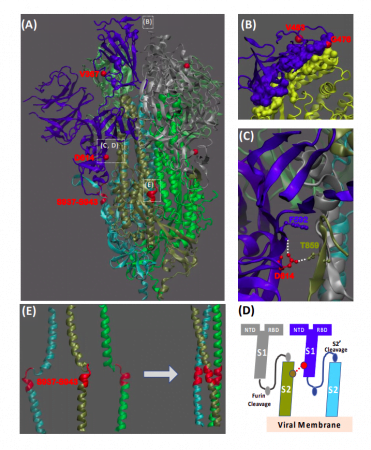 In early March, Chinese researchers announced the discovery of two different types of new coronavirus. According to the work, more than 70% of the samples analyzed were more aggressive, while 30% were associated with a less aggressive type. It was discovered that the most aggressive and deadly strain spread in the early stages of an outbreak in Wuhan, the Chinese city where the virus first appeared.

Researchers from Los Alamos, supported by scientists from Duke and Sheffield Universities in England, were able to analyze the thousands of coronavirus sequences assembled as part of the GISAID, a global initiative to share data on all types of influenza. Thanks to this organization, scientists are able to quickly exchange information regarding all changes in influenza viruses and coronavirus.

Researchers have already identified 14 mutations. They relate to changes in S-protein, a complex multicomponent molecule that allows SARS-CoV-2 to enter host cells.

The more open and harmonious the work of scientists around the world will be, the sooner and more efficiently it will be possible to take measures that will allow returning to a “peaceful” mode of life.

Earlier, biologists from China said that they managed to develop a new type of SARS-CoV-2, which causes the human symptoms of Covid-19 in mice, and scientists from the University of Nijmegen in the Netherlands explained what role bradykinin plays in the development of coronavirus infection.

To date, more than 3.74 million cases of coronavirus infection have been diagnosed in the world, over 249 thousand people have died. For Russia, according to official figures, this is 165,929 and 1,537 people, respectively.

In March, the largest asteroid will fly near the Earth in 2021

Experts showed the consequences of stopping the rotation of the Earth

In March, the largest asteroid will fly near the Earth in 2021

Experts showed the consequences of stopping the rotation of the Earth