US, WASHINGTON (ORDO NEWS) — Drops of saliva can fly out of our mouth, not only when we cough or sneeze, but also when we just talk. Scientists from the United States found that saliva flying out of the mouth with loud speech can remain in the air for more than 10 minutes and facilitate the transmission of viruses from person to person. An article about this is published in the publication Proceedings of the National Academy of Sciences .

Transmission of pathogens through saliva is a dynamic process. For every second of his speech, a person generates on average about several thousand drops of saliva of various sizes: from one to 500 micrometers. Moreover, the sedimentation rate of such drops depends on many factors: temperature and humidity, the initial size of the droplet, air movement and the content of volatile substances in saliva.

The probability of transmission of coronavirus by airborne droplets is affected primarily by particle size. The larger the drop, the higher the risk that it will contain at least one virus. So, for example, a droplet of saliva with a diameter of 50 micrometers contains a virus particle SARS-CoV-2 with a probability of 37%; and for droplets 10 micrometers in size, this probability is 100 times less (0.37%).

To better understand how dangerous the saliva of a person infected with the virus is for others, the authors of the article conducted an experiment. One of the scientists pronounced the phrase “Stay healthy” in a box 60 centimeters high for 25 seconds. A fan was installed in the box, providing uniform mixing of air; a flat laser beam with a height of 150 and a thickness of one millimeter also hit it.

10 seconds after the speech ended, the fan turned off. After that, the scientists recorded the distribution of suspended particles inside the box for 80 minutes. By the number of droplets of saliva that fell into the plane of the beam, the researchers calculated the total number of drops in the chamber volume. 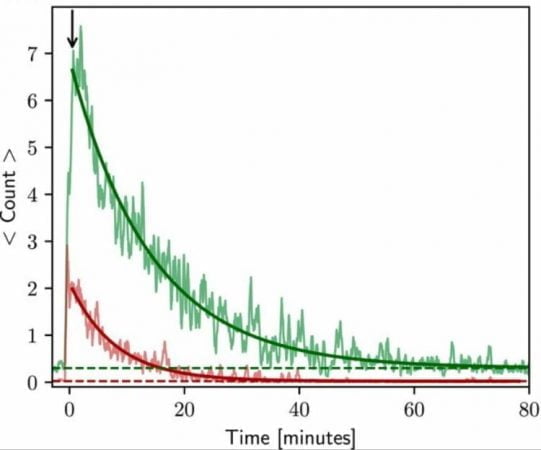 Calculations showed that at the time of turning off the fan in the box were about 60 thousand suspended particles. This meant that 2500 drops of saliva flew out of the experimenter’s mouth every second. The settling time of these drops ranged from eight to 14 minutes, depending on size.

The average initial particle diameter of saliva ranged from 11-20 micrometers. If we assume that the viral load of one milliliter of the saliva of an infected person is about seven million virions, then such a person every second emits about a thousand virus-containing drops that are in the air for at least eight minutes.

This work clearly demonstrates the danger that people expose themselves by communicating with others without respecting social distance, as well as without the use of protective equipment. Also, an article by American scientists shows why, in order to protect others from a pathogen, it is necessary to wear a mask in public places.

Chinese scientists crossed a monkey and a man

Chinese scientists crossed a monkey and a man