(ORDO NEWS) — Researchers from Germany were surprised yesterday, Jan. 24, when cameras they installed in Argentina captured a bright flash of noctilucent clouds (NLC) in Rio Gallegos in Patagonia.

“Finally, the season of southern noctilucent clouds has lit up the sky with spectacular effects,” says Gerd Baumgarten of the Leibniz Institute for Atmospheric Physics.

NLK are the highest clouds of the Earth. They form when puffs of water vapor rise from the poles to the edge of space. Water crystallizing around meteoritic dust particles creates electric blue structures. NLK is, literally, meteor smoke.

At this time of the year, NLCs are usually within the Antarctic Circle. Therefore, it is surprising to see how they break out into the middle southern latitudes; Rio Gallegos is at 51.6°C.

To confirm that this is indeed an NLC, Natalie Kaifler of the German Aerospace Center (DLR) scanned the clouds with a laser radar (lidar) in Rio Gallegos. The echo returned from a height of 85 km above the Earth’s surface. 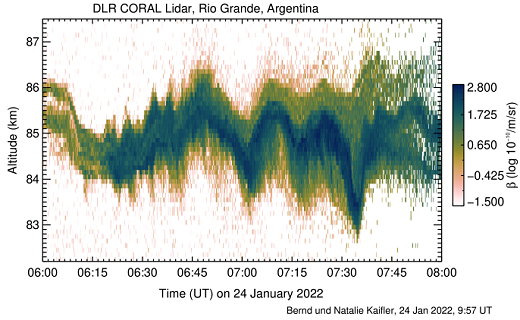 It is in this place that NLCs usually form. The reality of their actual presence has been scientifically confirmed.

Where did these clouds come from?

Possibly from Tonga. The eruption of the Hunga-Tonga-Hunga-Hapai volcano on January 15 threw a plume of ash, sulfur dioxide and (very importantly) water vapor to a height of more than 55 km.

Baumgarten and other researchers are investigating the possibility that water from the volcano entered the mesosphere, creating a surge of noctilucent clouds.

Dimming the Sun is a dangerous game that should be banned, scientists warn

Scientists have proved that Lysenko was right, and Darwin was wrong

Dimming the Sun is a dangerous game that should be banned, scientists warn

Scientists have proved that Lysenko was right, and Darwin was wrong