(ORDO NEWS) — May 22, 2020 at the Severnaya Verf enterprise, the frigate Admiral Golovko, being built for the Russian Navy , was launched He became the third ship of project 22350. Admiral Nikolai Evmenov, commander of the Russian Navy, participated in the ceremony.

Earlier, “Admiral Golovko” wanted to launch before the end of 2017: the delay in the supply of a power plant using gas turbines made in Ukraine was the reason for the postponement of the data in the military-industrial complex. 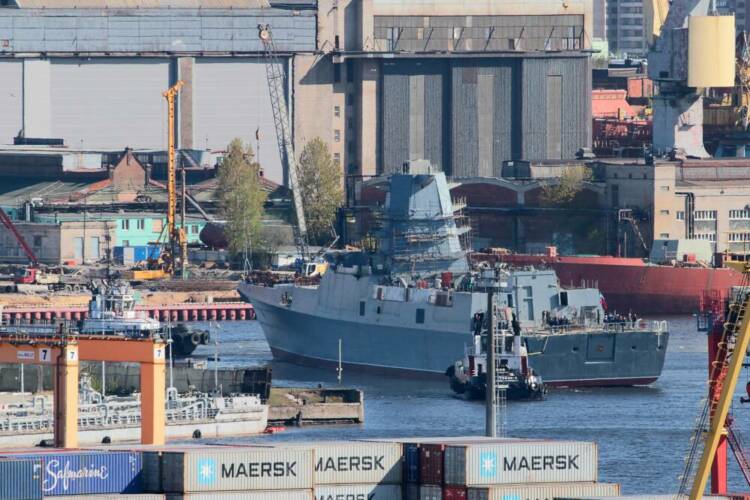 Project 22350 frigates are one of the key elements of the surface component of the Russian fleet of the future and one of the most important naval programs of Russia in general. Recall that the lead ship of the series – “Admiral Gorshkov” – was introduced into the fleet in 2018. The second frigate, named “Admiral Kasatonov”, is currently being tested. In addition, the fourth ship, the Admiral Isakov, is now under construction, and two more frigates of this project have been contracted.

Currently, they are working on issues related to the modernization of project 22350. According to data presented in April this year, advanced frigates will be able to carry up to 24 strike missiles (ships already built are equipped with sixteen launchers). According to one of the sources in the defense industry complex, a fifth, sixth, seventh and eighth frigate of project 22350 will be built as part of the modernized project. Another source in the military-industrial complex noted that measures to increase the number of missiles should not lead to a serious increase in the frigate’s displacement: Admiral Gorshkov ”, we recall, is (full) 5400 tons.

Both the early and the modernized versions of the frigate will have to carry Zircon hypersonic missiles, which can significantly enhance the capabilities of the Russian fleet. Now they are being tested. Recall that in February it became known about the launch of a new rocket from the Admiral Gorshkov: according to TASS, the launch was carried out in January 2020 from the Barents Sea. According to unconfirmed reports, the rocket flew 500 kilometers and successfully hit a target located on a ground range.

It is worth saying that the frigates of the project 22350 will not be the only carriers of the new product. In the future, other surface ships, as well as multi-purpose submarines, including the promising Russian fifth-generation submarine, want to teach Zircon in the future.