(ORDO NEWS) — It’s hard to believe, but there are up to 4 billion rivers and about 100 million lakes in the world. Such conclusions were made by scientists during the study of satellite images. For the most part, rivers and lakes are very picturesque places, it is a pleasure to relax on the banks of which.

However, among them there are those that pose a danger to all living things. An example is the Ganges River, which is located in India. If you believe what is written in the holy book “Ramayana”, this river is able to return people from the world of the dead, so the locals hold ritual burials on the banks of the river.

Because of this, the water is teeming with dangerous bacteria and the river causes the death of thousands of people every year. There are other life-threatening bodies of water in the world – each of them is dangerous in its own way.

The Yangtze River is the dirtiest in China

The Yangtze is the third longest river in the world, after the Amazon and the Nile. It crosses China from west to east and is one of the main sources of fresh water for many Chinese settlements. Once upon a time, the river was full of various animals and plants.

However, over time, it has become heavily polluted, because waste from about 400 chemical plants is poured into it. It is also filled with harmful substances from oil refineries and steel mills. Finally, human waste is thrown into it, without any filtration.

Due to severe pollution, the river harms not only people, but also all living things. In ancient times, the Yangtze was very deep and clean, but those days are behind us – now it is full of areas with water so dirty that there is not a single life there.

Ecologists have been sounding the alarm for a long time and say that a little more, and the river will be impossible to save.

In the southwest of Spain is the Rio Tinto river, about 100 kilometers long. First of all, it frightens with the fact that it is painted red – the feeling that it is flowing somewhere in hell or the planet Mars.

In addition, it frightens with its composition, because an unthinkable amount of metals coming from copper, gold and silver mines is dissolved in the water.

Because of this, the level of acidity in the water goes off scale and few people can live in it. According to scientists, only extremophiles are found in the Rio Tinto – microscopic creatures that can live in the most severe conditions. For everyone else, local water is deadly. 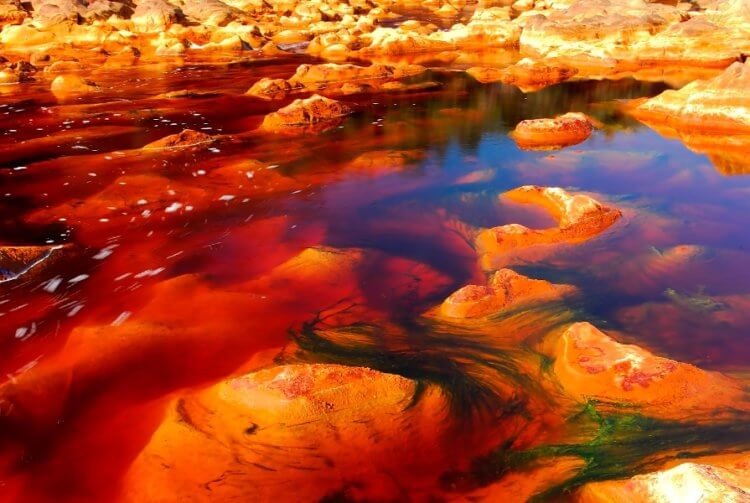 The danger of the Amazon River in South Americ

The Amazon River is considered the longest in the world. She has no special problems with mud – there are no chemicals in her waters and animals feel great in her. Perhaps this is the only place on our list that poses a danger exclusively to people.

After all, if someone is unlucky, and he finds himself in the waters of the Amazon without a boat, he is unlikely to be able to get out of the river alive.

This is because it is teeming with monsters like crocodiles, anacondas, piranhas and so on. Also in these waters lives the fish vandellia, which penetrates the genitals of people and eats them from the inside. Sounds just awful, doesn’t it?

Boiling Lake in the Dominican Republic

On the territory of the Dominican Republic there is the Morne Trois Pitons National Park, and in it there is a boiling Boiling Lake.

As the name suggests, the water in this lake is very hot. During dry periods, the water temperature in it reaches 92 degrees Celsius. It cools down to 10 degrees only during rainy periods, and this does not last long.

Many accidents have occurred in this lake, as a result of which people received serious burns or even died. Because of this, even during periods of rain, swimming in these waters is strictly prohibited. The water in the lake is very hot due to the location of the lake next to the volcano.