(ORDO NEWS) — Swiss scientists investigating the mystery of the Dyatlov Pass have presented new evidence for their hypothesis, including unique footage of an avalanche that descended very close to the slope on which the tourists died.

In the famous case of the death of the Dyatlov tourist group, another point has been put. Swiss experts, who a year ago came up with a scientific substantiation of the “avalanche theory”, received new data that confirm this version.

An article by Alexander Puzrin and Johan Gaume was published in Communications Earth & Environment, and we got in touch with them to find out what happened and whether it’s time to put an end to this long and mysterious story.

If you are aware of the prehistory of the Dyatlovites, you can safely move on to the next subheading. And we will remind the rest that in the winter of 1959 a group of tourists from Yekaterinburg, led by Igor Dyatlov, disappeared, making the most difficult route through the Northern Urals.

Over the following months, searchers found their belongings and the bodies of all nine – half-naked, frozen, some with severe and difficult to explain injuries. The investigation referred to the “effect of force majeure”, but there were so many strange details in this story that the mysterious death of tourists became one of the most famous mysteries of the last century.

There are dozens of hypotheses for every taste, from conspiracy theories (CIA, KGB), mystical (spirits and divination of local Mansi), fantastic (UFOs) to more or less realistic (meeting runaway prisoners or wild animals). Among the latter, the “avalanche” hypothesis most often pops up, which arose even among the first rescuers who discovered the remains.

On the other hand, the slopes of the pass where the bodies were found (subsequently it was named the Dyatlov Pass) are considered too gentle for an avalanche to come down. In addition, the wind here in winter is so strong that it simply blows away the snow, preventing it from accumulating in the right amount. 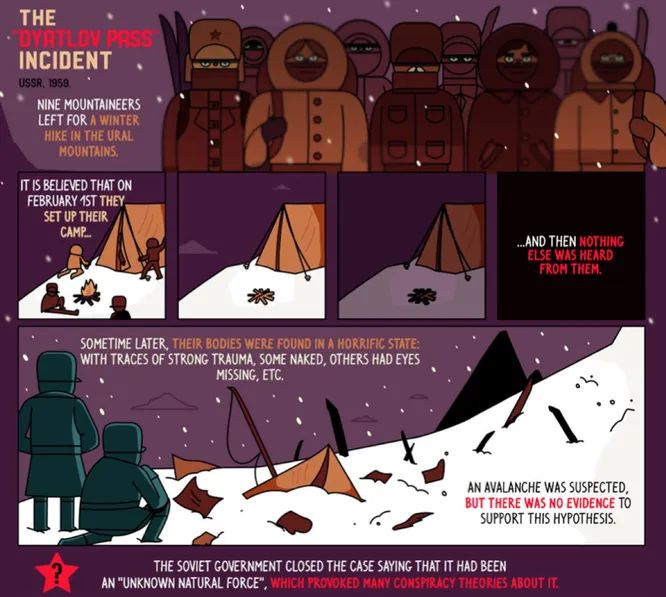 Justification of the hypothesis

However, in 2021, Swiss scientists Alexander Puzrin and Johan Gaume, experts in avalanches and landslides, showed that avalanches at the Dyatlov Pass are quite possible, and the collapse of a small snow slab – several meters in size but weighing several tons – is quite capable of causing those heavy injuries that were recorded on the bodies. In the September 2021 issue of PM, we talked in great detail about how this could happen.

In short, scientists have shown that the data on the steepness of the slope of the pass is not accurate enough. The average angle (23 degrees) is really not enough for an avalanche. However, if the slope goes in steps, then, having set up a tent on a relatively flat area, the Dyatlovites could find themselves under a steeper one, with a slope of 28 or even 30 degrees.

In addition, when setting up a tent, the Dyatlovites undermined the snow cover, weakening its integrity. As they settled in for the night, the wind blowing off the flat ridge of the pass brought additional masses of snow over the tent, creating a menacing situation. Finally, this mass broke off, crushing the sleepers to the hard skis, which they put under them.

Further – desperate attempts to get out, save the most injured comrades, navigate in pitch darkness, find salvation from the terrible cold and wind, make a fire, throwing and death – these are already details that we are unlikely to ever figure out completely.

Nevertheless, the key conclusions of Puzrin and Gaume were quite unambiguous: an avalanche is a scientifically realistic scenario of that long-standing tragedy. Although this option did not suit many enthusiasts of the investigation. “We talked about what these scientists can understand in general,” Alexander Puzrin told us. “They have never been to the Urals either.” 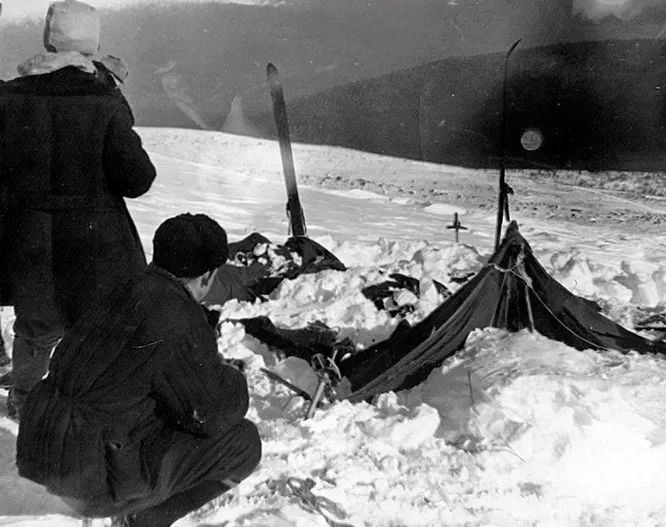 A well-known photograph of the Dyatlovites tent, taken by rescuers in 1959. It is possible that the pieces of snow just below the fallen tent are fragments of a snow slab that came down on a fateful night

Indeed, despite the accuracy of computer models and formulas tested and validated by independent experts, some gaps remained in the work of the Swiss researchers. Firstly, so far no one has ever seen even a small avalanche descend on the Dyatlov Pass. Secondly, they determined the presence of a step on the slope with a slope of 28-30 degrees according to archival evidence.

“It turns out that the Dyatlovites had to put up a tent in this place and on no other on the entire slope,” Alexander explains. “Moreover, the exact location of its location has long been lost, people are still reconstructing it from photographs, arguing about where exactly it was.”

One way or another, it is doubtful that the tourists were simply not lucky enough to put up a tent in the only truly dangerous place on the entire pass. Or not the only one?

Despite the huge interest of the public, there has not yet been a three-dimensional topographic model of the Dyatlov Pass. Fortunately, cinema came to the aid of scientists. “Last winter, after the publication of that very article, we were contacted by the Swiss documentary filmmaker Matteo Born,” Alexander Puzrin continues.

He said that he decided to make a film about this story and asked me, as a Russian-speaking person deeply involved in the topic, to help organize the process. I managed to find Oleg Demyanenko and the Ural Expeditions team – they are professional guides and have taken both tourist and film crews to the pass many times.”

Oleg, Matteo and the whole team visited the pass at the end of March and in September 2021. They brought with them a drone that Swiss scientists programmed to take pictures: in early autumn, when there is no snow yet, it is possible to carry out detailed mapping of the slope.

Seizing a brief moment of calm weather, the drone took to the air and barely had time to shoot when strong wind gusts returned again, clouds covered the sky, and snow began to fall. Nevertheless, the work was done, and soon the scientists received a three-dimensional model of the eastern slope of the pass where the tragedy occurred, with a resolution of 9 cm. 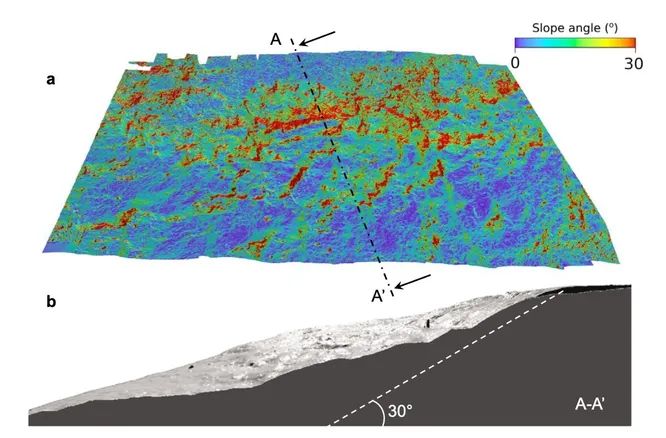 Topographic 3D model of the eastern slope of the Dyatlov Pass: it can be seen that its surface is stepped. Steep sections with an avalanche slope are highlighted in red

In life and in cinema

“All this was done for the film, and it was organized in such a way that for the first time we saw the model right under the camera,” recalls Alexander Puzrin. – Our reaction is visible in the frame: we were shocked, everything was confirmed.

The three-dimensional map shows that the steps go along almost the entire slope of the Dyatlov Pass. He is all of them, you can put up a tent anywhere, and you will almost certainly have a rather steep and avalanche-prone part of the slope hanging over you.

But filming brought another surprise. In the photographs taken by one of the guides, Dmitry Borisov, and in some of the frames taken by Matteo Born the next day, scientists discerned in the distance something very similar to the trail of a real avalanche.

The remains were located a couple of kilometers from the proposed site of the Dyatlov tent, from where the shooting was carried out. But even from a distance, many of the signs of an avalanche could be discerned, including a crack at the top, fragments of a snow slab at the bottom, and so on.

“To be sure, we sent this photo to a dozen and a half world experts. Alexander explains. “Although the majority agreed that this was indeed an avalanche, there were other versions.” The film (it is being prepared for release on several TV channels in 2022) ends with this. But life went on, and again in the most unexpected way. 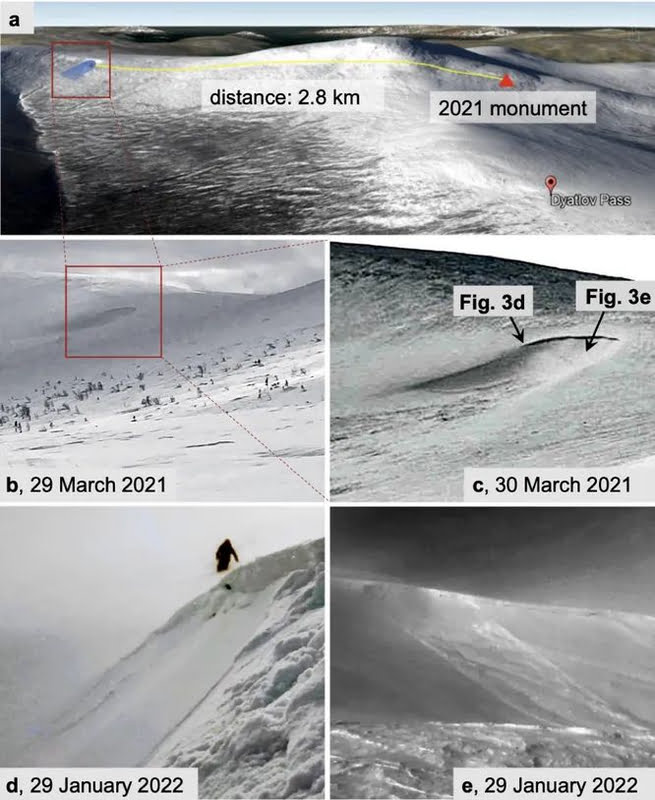 A few random shots taken at the Dyatlov Pass in 2021 and 2022, which included traces of avalanches

“In January 2022, an editor from Nature wrote to me,” says Alexander Purzin. – Our article turned out to be one of the most popular in the history of the magazine, it was downloaded an unprecedented number of times. The editors asked the authors of such successful articles to talk about how these publications have influenced their lives, careers, and new research. The new data “from the cinema” was very useful to us, but it was not enough.

Then the Swiss scientists again contacted professional guides Oleg and Dmitry, and already at the end of January 2022, in the same season in which the tragedy of the Dyatlovites happened, they boarded snowmobiles and again went to the pass.

They were supposed to conduct additional surveys and measurements of the snow cover, and ideally – to try to provoke an avalanche (of course, taking all the opposite measures). “The weather quickly deteriorated, a severe snowstorm arose, the temperature dropped sharply. – says Alexander.

On open slopes, gusts of wind sometimes even overturned snowmobiles. The most difficult conditions even for experienced tourists – and it was almost the same day as then, in 1959.

Oleg and Dmitry believed that the expedition ended in complete failure, but when scientists began to examine the frames they took in rare moments of calm weather, a valuable find was discovered. “We look and see an avalanche,” says Alexander.

This time they were literally 50 meters from her, and it was most definitely traces of a fresh snow slab. The guys saw how quickly the snow destroys the tracks. Apparently, she went down about 20 minutes before their arrival, and after 20 minutes she disappeared completely. This explains why the rescuers did not see the traces of the avalanche, and why no one has seen them in the 60 years since.

“After all, people are far from being there all the time, especially in such weather,” Alexander continues. – Oleg and Dmitry are experienced guys, they have seen a lot. But even they admitted that it was one of the most difficult expeditions.

It takes a certain amount of luck to catch the right moment. And I have some kind of karma with this case. And in the work on the last article, and subsequently – very often there are moments of good luck, happy occasions. Either the weather helps, or an unexpected meeting. And I want to say that I have never had to experience anything more emotional in my work.”

“We have been asked again and again if our work has put an end to this matter,” the Swiss scientists conclude the latest article.

We always answered that although the case remains open, our part is completed, and we do not want to spend the rest of our lives solving the riddle of the Dyatlov Pass. Now, a year later, we are no longer so sure. And if anyone asks that question again, we’d better evade the answer.”