(ORDO NEWS) — The solar system may be even wetter than previously thought. The thing is that Mimas, one of the satellites of Saturn , most likely has a subsurface ocean of liquid water.

If so, then Mimas will join other satellites of the solar system, such as Europa and Enceladus , which represent the class “IWOW” (Eng. Interior Water Ocean Worlds, which translates as “internal water ocean worlds”).

“Because the surface of Mimas is heavily cratered, we thought it was just a frozen block of ice,” said Alyssa Roden , a geophysicist at the Southwest Research Institute of San Antonio, Texas. – IWOWs like Enceladus and Europa tend to be fractured and show other signs of geological activity.

It turns out that the surface of Mimas was deceiving us, and our new study greatly expands the definition of a potentially habitable world in the solar system and beyond.”

A life that doesn’t need sunlight

Here on Earth, life mostly depends on sunlight, but there are a few places where organisms can thrive in total darkness. For example, at the bottom of the oceans live creatures clustered around hydrothermal vents that release heat and nutrients from the bowels of the Earth . There, life does not depend on photosynthesis, but on chemosynthesis – chemical reactions of oxidation of inorganic compounds in order to synthesize organic substances.

This knowledge became especially relevant in the era of our search for extraterrestrial life, when Jupiter ‘s moon Europa and Saturn’s moon Enceladus were discovered to have subsurface oceans of liquid water hiding under their icy surfaces.

The tidal stretching and contraction of moons, caused by gravitational interactions with their parent planets, generates enough heat to keep the water below the surface from freezing. However, Mimas seems to react differently to this: it is closer to Saturn and has a more eccentric (elliptical) orbit than Enceladus, indicating that it must experience stronger tides; however, its activity is much lower than that of Enceladus. 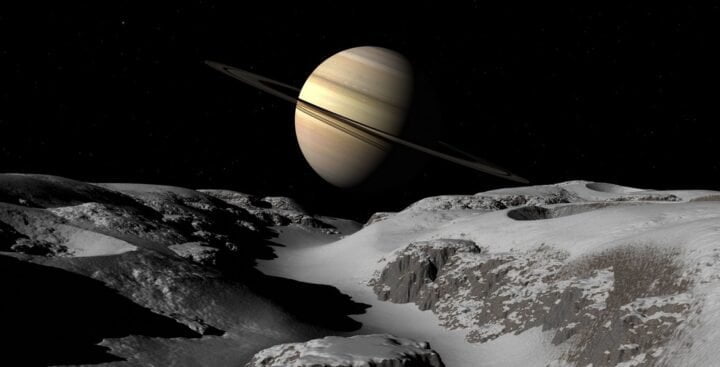 This led the scientists to conclude that Mimas was probably completely frozen and thus less prone to deformation. But the features of its libration (physical “fluctuation”), detected by NASA’s Cassini spacecraft , haunted scientists. In other words, if Mimas were absolutely solid, then it would not have to “wobble” in the way that Cassini recorded.

Mimas libration suggests that either the moon has a differentiated core or a liquid ocean—something that prevents the core from being rigidly connected to the surface, allowing the latter to move smoothly.

Roden and her team decided to investigate the possibility of a liquid ocean. To do this, they had to solve the problem of generating and dissipating enough heat from the interior of Mimas to keep the water inside in a liquid state, while maintaining a very thick icy outer shell.

“Most of the time when we create these models [of the interior of Mimas], we have to tune them in such a way that we end up with what we observe,” Roden explains . “Evidence for the existence of an inland ocean just jumped out of the most realistic scenarios of ice sheet stability and observed librations.” 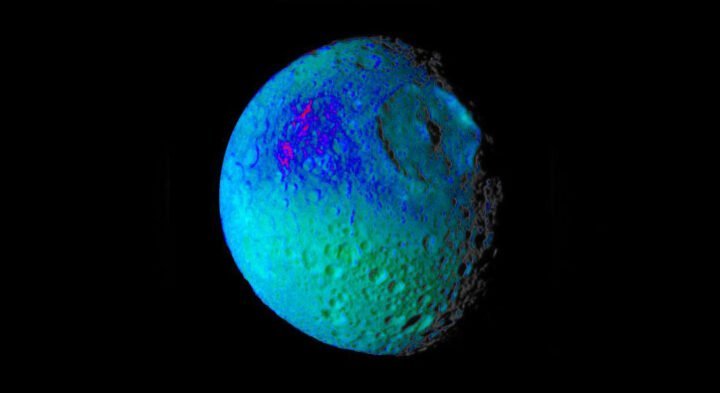 According to their models, the Mimas ice shell is 24 to 31 kilometers thick, under which the global ocean “circles”. Because Mimas is only 396 kilometers in diameter, the ocean is relatively deep.

The team of researchers also found that the heat flux from the surface of Mimas is likely to be very sensitive to the thickness of the ice in any region. Future spacecraft should be able to measure this directly, both on Mimas and other IWOWs.

Finally, models suggest that in addition to a liquid ocean, Mimas may also have a differentiated core. Notably, in contradiction to previous models of Mimas’s evolution, as the early differentiation of the satellite should have provided an orbit very different from what we observe today. All this makes Mimas a very interesting object for further research.

“While our results confirm Mimas has a subsurface ocean, it is difficult to reconcile the satellite’s orbital and geological characteristics with our current understanding of its thermal orbital evolution, ” Roden added .

“Assessing Mimas’ status as an oceanic moon would allow us to compare patterns of its formation and evolution, which would help us better understand Saturn’s rings and medium-sized moons, as well as the abundance of potentially habitable oceanic moons, especially on [orbit] Uranus, a target for further study.”.

New details of the Apollo 11 mission: in case of failure, NASA planned to leave astronauts to die on the Moon

New details of the Apollo 11 mission: in case of failure, NASA planned to leave astronauts to die on the Moon