Alexander Hamilton, a successful farmer from Kansas, was an eyewitness to the whole incident, who told everything under oath: 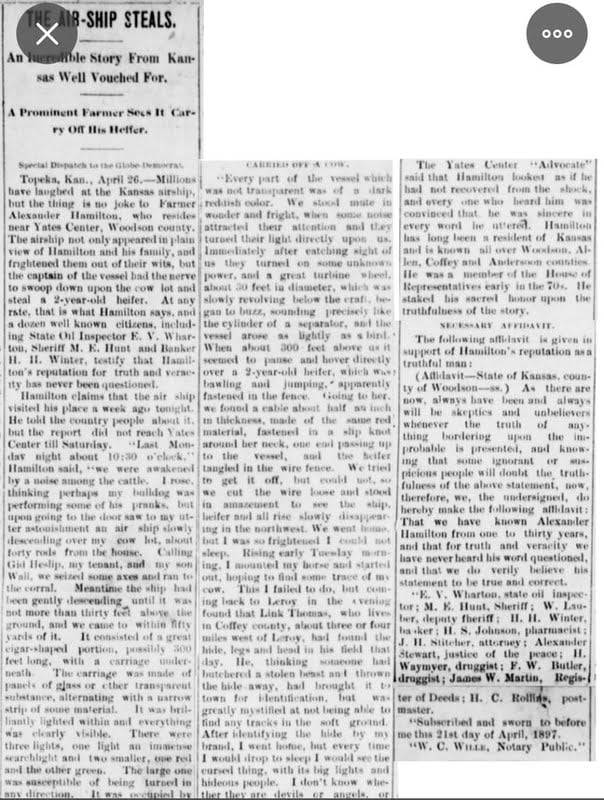 Last Monday evening at about 10:30 we were awakened by the cry of cattle. I got up, thinking that perhaps my bulldog was scaring the cows in the paddock, but when I walked to the door, I saw, to my utter surprise, that the airship was slowly descending onto my herd of cows, about forty rods (200 meters) from the house.

I called my tenant Guide Heslip and my son Walla, we grabbed some axes and ran into the corral. Meanwhile, the ship descended smoothly until it sank thirty feet (9 meters) above the ground, and we approached it at a distance of fifty yards (45 meters).

“It consisted of a large cigar-shaped piece, perhaps three hundred feet long (91 meters), with a carriage underneath. The carriage was made of glass or some other transparent substance alternating with a narrow strip of some material.

Inside, it was brightly lit, and everything was clearly visible – it was occupied by six of the strangest creatures I have ever seen. They chatted together, but we could not understand a word they said.

Most of the cigar was not transparent, but a deep reddish color. We stood dumb with surprise and fear. Then a noise caught their attention, and they turned the light straight at us. Immediately, when they saw us, they turned on some unknown force, and a huge turbine wheel, about thirty feet in diameter (9 meters), which was slowly spinning under the ship, began to hum, and the ship rose easily, like a bird.

When he was about three hundred feet (91 meters) above us, he seemed to stop and hover right over a two-year-old chick who was screaming and jumping by the fence. Approaching her, we found some kind of material tied in a knot around her neck and going to the boat from a heifer entangled in a wire fence.

We tried to take it off, but we couldn’t, so we broke the wire and saw the ship with the heifer slowly rise and disappear in the northwest.

We went home, but I was so scared that I could not sleep. Getting up early on Tuesday, I rode out on horseback, hoping to find at least some traces of my cow. I could not do this, but when I returned in the evening, I found that Link Thomas, about three or four miles west of Leroy, had found a skin, legs and head in his field that day.

He, thinking that someone had killed the stolen cow, brought the skin to the city for identification, but was very puzzled that he could not find any traces in the soft earth where he found all this.

Having identified the skin by my brand, I realized that this was my cow that they stole and I went home. But every time I fell asleep, I saw a cursed creature with its big lights and disgusting people.

I don’t know if they are devils or angels or anything else; but we all saw them, and my whole family saw the ship, and I don’t want to deal with them anymore.