(ORDO NEWS) — Paleo geneticists and bioarcheologists have studied the upper jaw and a fragment of a tooth found in Portugal during excavations of a Mesolithic burial ground.

They found that they belonged to a man who died around 1631-1763 AD. Apparently, he came from Senegambia and ended up in Europe as a slave.

In the middle of the 15th century, Portugal began to export African slaves to other continents, remaining a leading player in this market for three centuries. The oldest evidence of captive Africans being taken and sent to the Iberian Peninsula dates back to 1441, when sailors brought 12 slaves to Lisbon.

Portuguese merchants quickly realized that this activity could be commercially successful if scaled up, as the plantations and mines were in need of labor.

The center of the slave trade was the western coast of Africa, from where, for a century, captives were taken to Portugal itself. This process acquired an even greater scale after the discovery and the beginning of the development of the New World.

In Central Portugal, in the area (freguesia) of Muge, there is a complex of archaeological sites of the Mesolithic and Neolithic eras. One of them is the burial ground of Cabeço de Amoreira, which is a type of monuments characteristic of the late Mesolithic (Atlantic period) – shell (kitchen) heaps.

These deposits, concentrated on an area of ​​about 14 thousand square meters, were first studied at the end of the 19th century. During the years of excavations, archaeologists managed to find the remains of 29 people here, most of whom were buried in layers with Mesolithic stone tools. 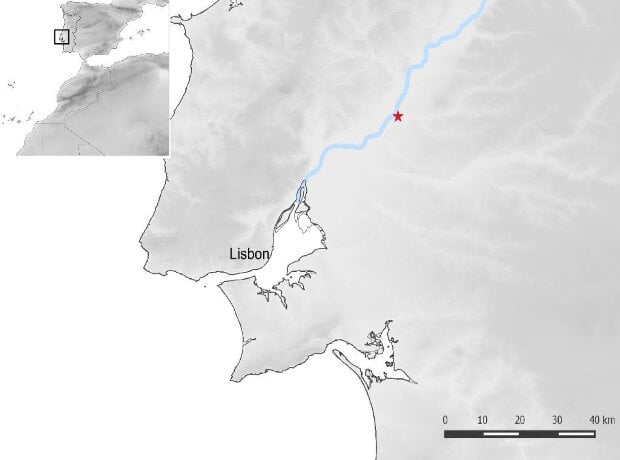 They selected for analysis the upper jaw and a fragment of a tooth, which were excavated back in the 1930s. Scientists noted that the grave of this man did not stand out among other burials of ancient hunter-gatherers. But archaeologists drew attention to the good preservation of the bones and the unusually high growth of the deceased person.

Radiocarbon analysis showed that the individual died around 1631–1763 AD, although the rest of the burials at this site date back to 6500–5000 BC. During a genetic study, scientists found that the remains belonged to a man.

Its mitochondrial haplogroup L3b1a is most common today in West and Central Africa, such as in the Lake Chad basin. And its Y-chromosome haplogroup E1b1a is more common in countries south of the Sahara – in Nigeria, Congo, Cameroon, Gabon and Guinea-Bissau.

Principal component analysis allowed scientists to find out that genetically this person is closest to modern West African populations that speak Bantu languages.

At the same time, scientists noted that the typical diet of the inhabitants of Portugal and Spain in the modern era included mainly C3 plants. This confirms the origin of the individual from West Africa. Analysis of stable oxygen isotopes indicates that before arriving in Portugal, he probably lived in the coastal regions of modern Mauritania, Senegal or the Gambia.

Scientists turned to historical sources and found out that in the 16th-18th centuries, slaves arrived in Portugal mainly from the territories of modern Guinea-Bissau and the Gambia. In metric books from the area where the ancient burial ground is located, they found records of the death of seven slaves and Africans.

Five of them were buried in Catholic necropolises. However, the place of burial of one slave who died in 1633 was not indicated. In addition, an entry dated November 1, 1676 reported the murder of a young black man next to a Mesolithic burial ground. But at the same time, the source indicated that he was buried in the churchyard.