(ORDO NEWS) — Something unusual has just happened in the mesosphere. At the end of June, NASA’s AIM spacecraft recorded a sharp increase in the frequency of occurrence of noctilucent clouds (NLC), the largest in the last 15 years.

“In the last couple of days, we’ve seen a huge burst of noctilucent clouds,” says Cora Randall, a professor at the University of Colorado Boulder. Randall is working with AIM data and she produced the graph shown above.

NLCs are the highest clouds on Earth. Seed by meteoroids, they hover at the edge of space, more than 80 km above the earth. NLCs form when summer puffs of water vapor rise into the mesosphere, allowing water to crystallize around meteoritic smoke particles.

“I photographed this phenomenon shortly before midnight,” says Schwenn. “The clouds shone brightly in the night sky.”

What is causing this? Maybe it’s SpaceX.

“We hypothesize that the surge could be caused by additional water vapor carried to higher latitudes by rocket launches,” says Randall. “But it will take a lot more quantitative analysis to confirm this or not.” 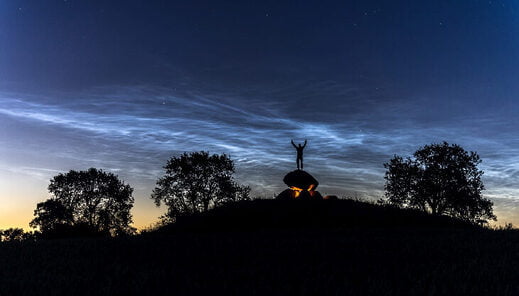 Time makes sense. Water vapor from rocket engines takes about 10 days to rise into the mesosphere. This brings us back to SpaceX’s launch of the Globalstar satellite on June 19, which caused a number of amazing phenomena in the sky due to the extra burn time of the second stage engine. Nighttime clouds could be another by-product of this unusual launch.

Night clouds are usually a polar phenomenon. However, since the outbreak began, we have received reports of night clouds from southern Washington and Oregon. Look for clouds, pockmarked and electric blue, just after sunset.