The more objects in the scene, the more the pupil expands, as if to better accommodate everything that needs to be looked at. This “perception of multiplicity” is a simple and automatic reflex , new research shows.

In the new study, researchers observed the pupil sizes of 16 participants as they looked at pictures of dots. In some pictures, the dots were connected together in the form of dumbbells, which created the illusion that there were fewer objects, and the size of the pupil was reduced. 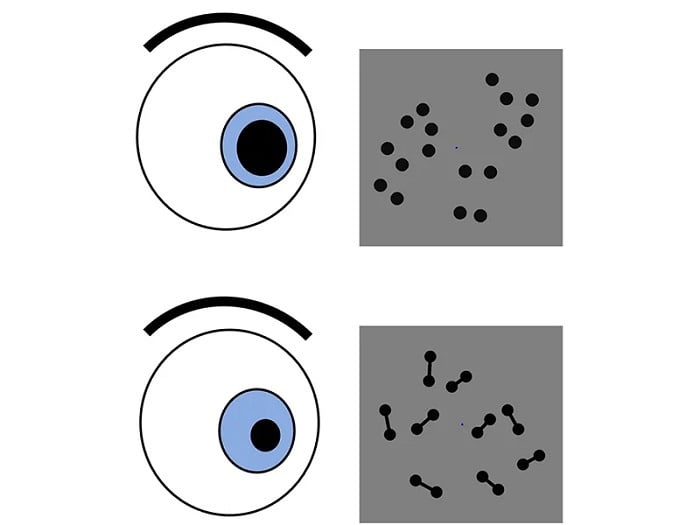 How the pupil reacts to various objects and patterns.

“This result shows that numerical information is inextricably linked to perception ,” says psychologist and neuroscientist Elisa Castaldi from the University of Florence in Italy.

“This may have important practical implications. For example, this ability is impaired in dyscalculia, a dysfunction in mathematical learning, so our experiment may be useful for early detection of this condition in the youngest children.”

Even though the number of black or white dots in the pictures in question did not change, the perceived number of objects did change due to the connecting lines.

Participants were asked to look at these images passively, not paying much attention to the total number of objects and not giving them a specific task.

As for where this reaction comes from, it is most likely related to the need for survival – it is believed that most animal species have a special “number sense” that allows them to detect enemies in the wild, find food, return home and much more. other.

As far as humans are concerned, the ability to identify numbers appears within hours of birth – even if you’re terrible at math, you have a built-in ability to estimate numbers, and our pupil dilation seems to be a response to this.

” When we look around, we spontaneously perceive the shape, size, movement and color of a scene ,” says psychologist David Burr of the University of Sydney in Australia, also affiliated with the University of Florence.

Just as spontaneously, we perceive the number of objects in front of us . “This ability, common with most other animals, is evolutionarily fundamental: it allows you to immediately determine important quantities, for example, how many apples are on a tree or how many enemies are attacking.”

Previous research has shown that it’s not just light that affects pupil size: visual illusions related to brightness, size, and context also have an effect, supporting the idea that this eye dilation is at least partially controlled by signals higher up in the brain.

The researchers intend to find out why this happens, and what else can affect pupil size – for example, the movement required for the eye to perceive everything that appears in the scene.

And there are many more interesting things here. It appears that our eyes are more sensitive to the number of objects we look at rather than how they are positioned , which is another response that could be analyzed in future research.

“The latest research from our laboratory shows that pupil size is also regulated by cognitive and perceptual factors,” says physiologist Paola Binda from the University of Pisa in Italy.