(ORDO NEWS) — The islands of Malta and Gozo in the Maltese archipelago are dotted with hundreds, if not thousands, of parallel lines that seem to be deeply embedded in stone.

These ancient grooves have puzzled experts for centuries. Some of these strange footprints are deliberately cut off into rocks or off land into the ocean. Who and why created these mysterious footprints?

The footprints are carved into the rock, traversing the islands, most notably at Misra Ghar il Kbir, a prehistoric rock in Malta.

Like the spectacular Nazca lines in Peru or the giant stone circles in the Middle East, the enigmatic nature of these footprints has baffled researchers for years.

However, unlike marks in the desert, made for ceremonial or divine purposes, the so-called “cart tracks” in Malta are considered signs of transport or industry – the railways of the ancient world. 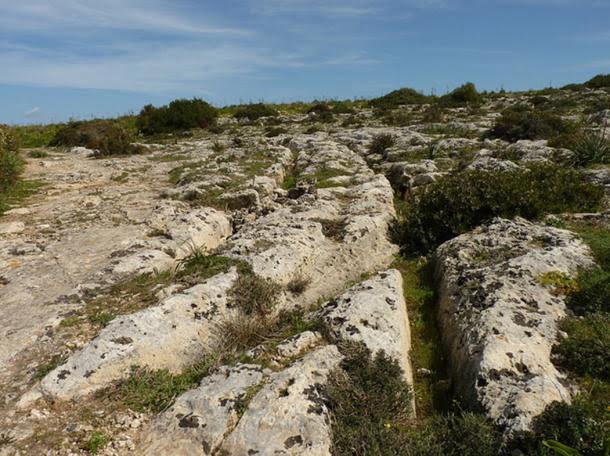 Nicknamed wagon ruts because of their resemblance to wagon ruts, it is not known for certain how or why they were made.

These clearly man-made ruts are double channels, parallel grooves etched into the limestone of the islands.

The footprints found at San Gwann in Malta are up to half a meter deep, making them the deepest ever found.

If this is the case, then it seems impossible that any vehicle could be dragged over them – sleds or wheels, since the height of the platform / axle must be more than 1-2 meters.

Some ruts are narrow and deep, square, as if carved with tools, while others are wide, V-shaped, and shallow, as if worn down by time and use.

Does this indicate different vehicles for different uses, or does it simply mean that the ruts were worn differently by the weather? 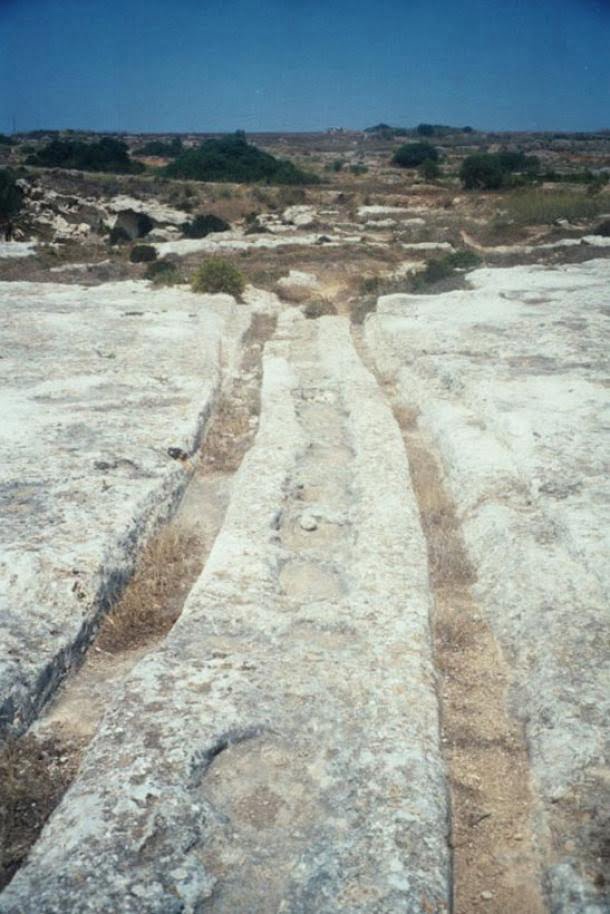 The purpose of the track is inexplicable, as some of the tracks come off the edges of the cliffs in an amazing way, go up and down very steep ridges, and some even leave the island into the sea, continuing under water. 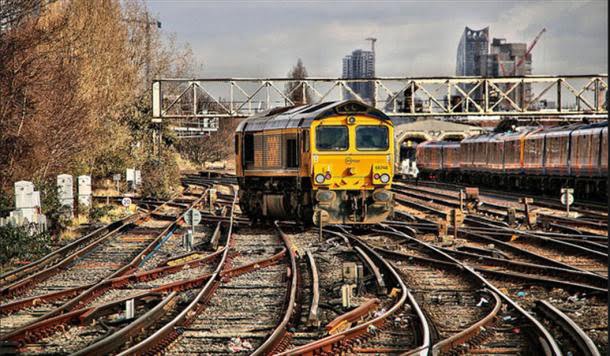 Ruts are so common in Misrah-Ghar-il-Kbir that the Englishman David Trump nicknamed the place “Clapham Crossing”.

The tracks here are so numerous and create such traffic jams that they resemble the complex network of tracks in a busy railway station in London, England. 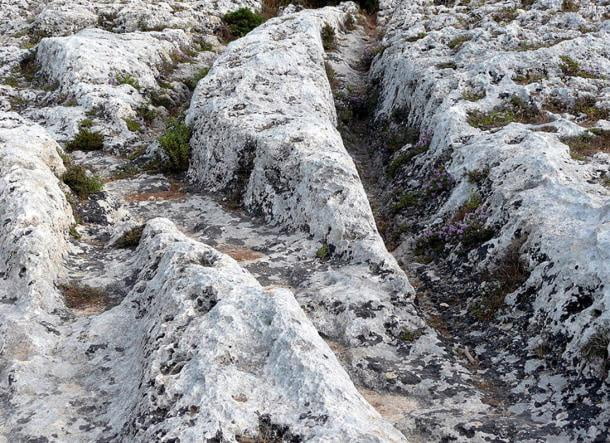 Similar track types can be found in Italy, Greece, Turkey, Spain, France and Germany, but they are not of the same origin and were created for different and known purposes.

Some of these tracks were purpose-built with masonry, and some of the patterns are the result of natural erosion on the wagon tracks. These differences make the Maltese gauges unique in the world.

Archaeologists suggest that the ruts in Malta were formed as a result of the repeated use of wagons, skids or sledges (wheeled or on skids) moving along the same route over decades or centuries.

It is assumed that goods could be transported through such a system.

Others wonder if these deliberate canals were a prehistoric irrigation system stretching across the islands. A less accepted theory suggests that the lines served astronomical purposes.

Further complicating matters is the way the wagons moved. If the wagons were pulled by animals, then their tracks could be visible between or outside the parallel grooves, but there is no evidence for this.

Therefore, some researchers suggest that the carts were pulled or pushed by people.

It is assumed that the lines were left by new settlers who arrived in Malta from Sicily at the beginning of the Bronze Age, around 2000 BC.

However, the Maltese archaeologist Anthony Bonanno suggests that the ruts are Phoenician structures, which dates them to the later seventh century BC.

Some researchers associate mysterious lines with the amazing temples of Malta. It is speculated that the footprints may be leftover evidence of how the temples were built. Could it be that sledges were used to transport heavy rocks from afar to temple construction sites?

It is believed to be the oldest known free-standing monument in the world, older than Stonehenge and the pyramids of Egypt. 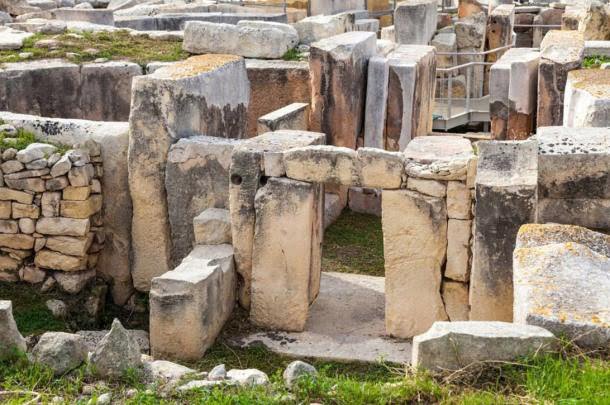 One proposed scenario includes the idea that cart ruts were created during the temple period when topsoil was transported to and from sites to create nearby crop fields.

Archaeologist Anthony Bonanno believes that the ruts are undoubtedly associated with temples. He cites the example of a group of gauges in the Buschetta area, which runs next to the largest and most important quarry in Malta.

Bonanno suggests that in ancient times they were meant to transport huge building blocks from the quarry to the road.

Unlike the construction of Stonehenge, where some heavy stones were transported up to 225 kilometers (140 miles), maybe the Maltese temple builders preferred certain types of stones and therefore used any means to transport them to the construction site?

Ruts do not have obvious start or end points at the megalithic temples in Malta, so for now this remains only a theory. 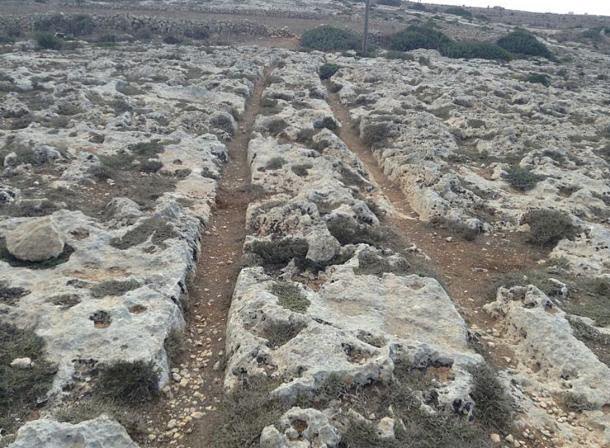 It has not been proven that all ruts were caused by heavy loads. Some of the ruts seem so perfect that they could have been carved by hand.

Author and journalist Graham Hancock writes: “It is also certain that they were not simply worn into the tough limestone by cartwheels over the centuries, as many have erroneously assumed; on the contrary, there is no evidence that cartwheels ever passed through these ruts – which were originally carved out of rock with tools”, in his book The Underworld: The Mysterious Origins of Civilization. 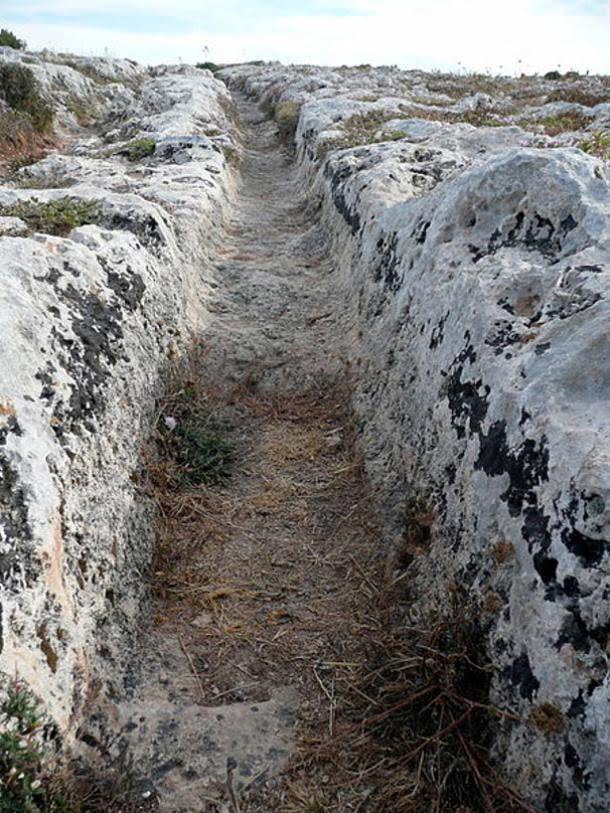 So many questions remain around Malta’s mysterious cart gauges. It is obvious that these channels played an important role in the lives of the ancient people who lived here, but their meaning and the role they played may never be known – the answers have become a mystery lost in time.