(ORDO NEWS) — Scientists from the UK studied the genomes of 532 plant species from different taxonomic groups. This made it possible to reconstruct the evolution of water metabolism in plants and the stages of their development of land over the past half a billion years.

or most of Earth’s history, land remained lifeless. Scientists believe that among the plants “pioneers” on it were the small and primitive ancestors of mosses, which acquired the necessary adaptations of water exchange about 500 million years ago.

This was the first step towards the advancement of plants deep into the continents and their great diversity on the modern Earth.

Now terrestrial (or higher) plants are ubiquitous. All of them are descendants of the only ancient algae, but over the past half a billion years they have changed a lot.

Researchers from the University of Essex (UK) decided to deal with their evolutionary history. Scientists examined 532 species from various systematic groups, including the genome and transcriptome (a set of RNA molecules).

The first land plants were forced to provide themselves with water and nutrients in a completely different way than their algae ancestors did – by directly absorbing from the surrounding solution. In the new habitat, the plants also had to become larger and stronger.

Biologists believe that the first step on the path of plants to a full life on land was the emergence of stomata – microscopic pores on green leaves and stems. Opening them ensures that the carbon dioxide necessary for photosynthesis enters the tissues, and closing them prevents excessive evaporation of water.

Algae do not have stomata, but mosses, the most primitive land plants, have them. These structures arose only once in the course of evolution: the very first “land” plants already had all the genes necessary for the formation of stomata. 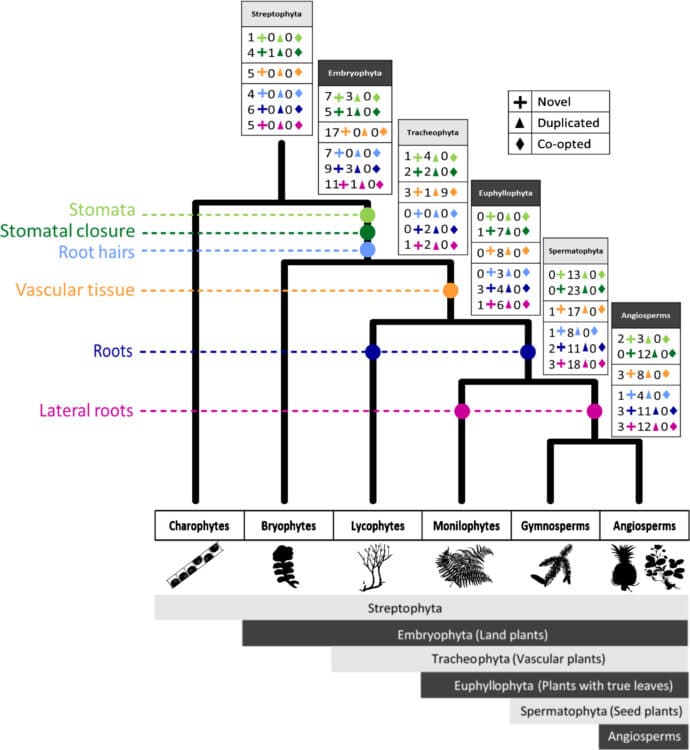 And yet, stomata alone are not enough: mechanisms are needed to regulate their work. The authors believe that the first terrestrial plants have already learned to close their stomata.

However, in their descendants, this process occurs faster due to the so-called gene duplication. During this process, two copies of the same gene arise, one of which retains the original function, and the second can acquire a new one.

In addition to the stomatal apparatus, on land, plants also required specialized conductive tissues. Thanks to them, water with dissolved substances can move through the plant much more efficiently. According to a new article, the emergence of such tissues is not associated with new genes, but with a change in the functions of existing ones.

Algae absorb water and nutrients from the entire surface directly from the reservoir. On land, this is impossible, so higher plants needed roots, with the help of which they are fixed in the soil and absorb the necessary solutions.

It turns out that there are two separate evolutionary events associated with roots. The first is the appearance of root hairs, microscopic outgrowths with a large specific surface area.

Hairs arose much earlier and were already present in the common ancestor of all land plants. The second event – the formation of the root as a large independent organ – occurred much later. Further, the plants also developed lateral roots, which made the root system more efficient.

It turns out that the evolution of higher plants occurred in stages and was associated with several important changes in their structure. The authors of the study emphasize that it is the regulation of water metabolism that should be considered the driving force behind plant evolution, and that their findings may be useful for agriculture.