(ORDO NEWS) — Planetary scientists, thanks to orbiters, have created a database of almost 15 thousand dust storms that operated on Mars from 1999 to 2014. Scientists managed not only to identify different types of groups of storms, but also to trace the routes of their movement around the planet. The article was published in the Icarus magazine.

Dust storms play an important role in the climate of Mars and the properties of its atmosphere, affecting circulation processes and temperature distribution. Such phenomena can be of very different scales: from local dusty demons to global storms covering the entire planet. Understanding how often and how storms occur and how they affect the atmosphere is necessary for planning robotic vehicles on Mars and future manned missions.

Michael Battalio and Huiqun Wang of the Harvard Center for Astrophysics have published a Mars Dust Activity Database containing information on 14974 dust storms recorded by the Mars Global Surveyor and Mars Reconnaissance Orbiter over 8 Martian years (1999–2014). For the storm to be included in the base, it had to cover an area of ​​more than 100 thousand square kilometers and be visible for more than one Martian day. 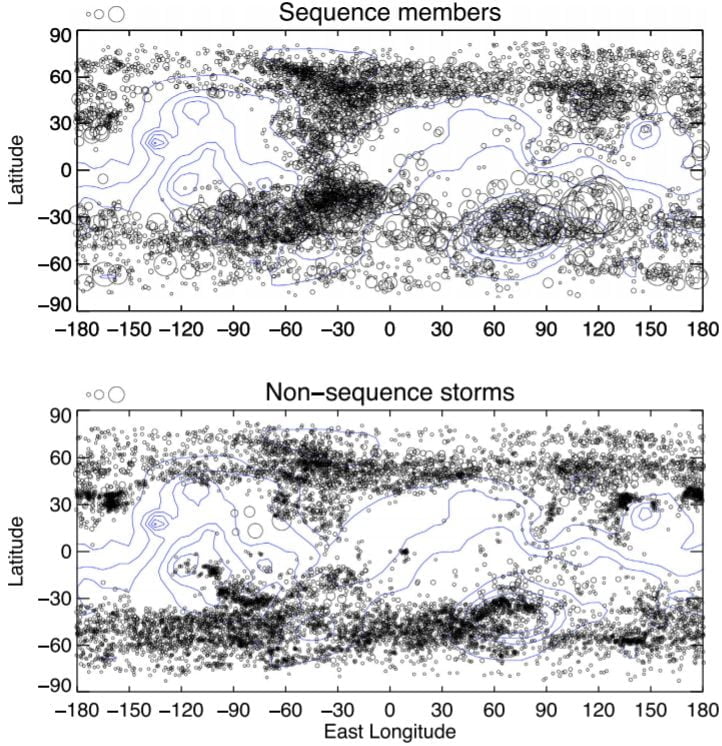 Scientists have determined that most of the observed storms were single events. However, they managed to isolate 228 sequences of storms. They were groups of eddies that followed consistent trajectories for three or more Martian days and were observed mainly in the Acidalia Planitia, Utopia Planitia and Arcadia Planitia in the northern hemisphere and region Aonia Terra, the Solis Planum, the Valles Marineris canyon system and the Hellas Basin in the southern hemisphere of Mars. It is worth noting that in the northern hemisphere of Mars, the sequences of storms move in a more organized manner than in the southern one.

Scientists have divided the sequences of storms into three types. The first type is one storm, the second is a group of several storms, in which one of the most active is distinguished. The second type is the most short-lived and usually lasts about 10 sols. Finally, the third type has storms in its composition, none of which grows more than 50 percent than any other member of the group, and stands out for the longest duration (15.9 sol on average).

Further work of the researchers is to expand the database to date and help scientists learn how to predict such events and determine their impact on the climate of the Red Planet. It is expected that in the future it will be possible to use neural networks to search for storms in the observational data of orbiters. 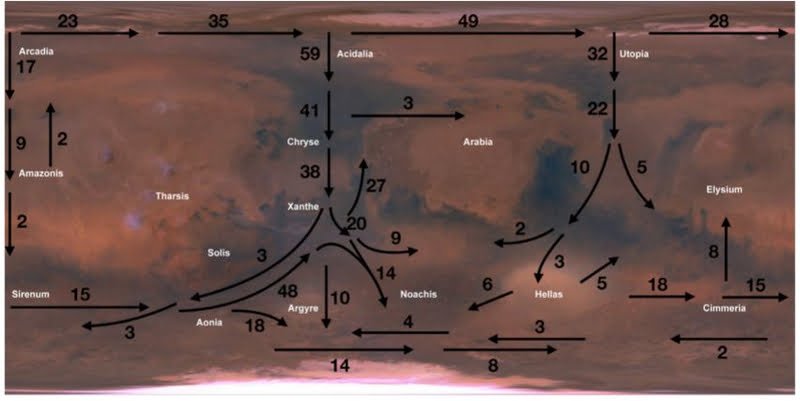 Earlier, we talked about how Mars Express examined dust storms on Mars and how a 50-meter dust devil got into the field of view of Curiosity.

Scientists have discovered primordial organic matter in a fallen meteorite

Scientists have discovered primordial organic matter in a fallen meteorite