(ORDO NEWS) — Paleogeneticists sequenced the DNA of nine individuals from the Zhenzishan necropolis, located in the vicinity of the capital of the Yuan Empire, the city of Shangdu, and found that not all people were indigenous to East or Central Asia.

It turned out that on the maternal side, most individuals came from the eastern regions of Eurasia, while on the paternal side, from the western.

Moreover, the parents of the two individuals appear to have been of European ancestry. This is reported in an article published in the American Journal of Biological Anthropology.

On the territory of the modern Shilingol aimag of Inner Mongolia are the ruins of the medieval city of Shangdu.

This city, once the capital of the Yuan Empire, the Mongol state of the 13th-14th centuries, was founded by the grandson of Genghis Khan, Kublai Khan (Setsen Khan). Shangdu was built as the summer capital of the khan in the middle of the 13th century and retained this status until the end of the dynasty.

It is known that Shangdu during its heyday was a fairly large city, whose population reached more than 118 thousand people. The palaces of this capital were described in detail by Marco Polo, who may have visited him more than once (the reality of his journey is questioned by a number of scientists). 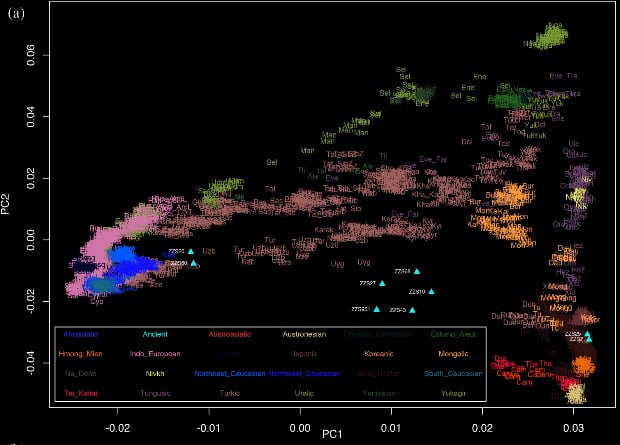 In 1359, Shangdu was captured by Chinese peasants (the uprising of the “red bandages”), after which the city was looted and burned. Ten years later, Shangdu was already taken by the troops of the Ming Empire, leaving it in ruins.

Currently, the remains of the medieval capital are included in the list of UNESCO World Heritage Sites. The ruins of Shangdu are very well preserved, because after the fall of the Yuan dynasty and its destruction by the Ming troops, it soon fell into disrepair and was finally abandoned around 1430.

Hui Zhou of Jilin University, together with colleagues from China, studied the remains of people excavated in the largest and longest-used burial complex near the city of Shangdu, the Zhenzishan necropolis. In the graves of this monument, sometimes at the same time there were the remains of people buried both according to the rite of inhumation and cremation.

This, according to the researchers, may indicate different religious beliefs even within the same family. Judging by the inscriptions and burial customs, it was assumed that mainly Han people were buried in this necropolis. However, excavations have shown that some of the people had Caucasoid features.

Archaeologists have unearthed seven burials of this monument, inside which there was practically no accompanying inventory (with the exception of a few coins). One of the tombs contained the remains of five adults and two youths.

The anthropological appearance of three of these adults turned out to be Caucasoid, while all other individuals showed Mongoloid features.

Paleogeneticists were able to sequence the DNA from all nine samples and confirm the initial identification of the individuals as males. Analysis of mitochondrial DNA haplotypes showed that they all belonged to different genetic lineages (F1a1, D5b1, B4a3, H6a1a, T2d1, D4o2a, D5b1, N9a1, and Z4a).

According to scientists, two haplotypes (H6a1a and T2d1) indicate the origin of the mothers of these people from the western part of Eurasia, while all the rest were associated with the population of the eastern regions of Eurasia.

Analysis of Y-chromosomes showed the opposite picture. Only two individuals (haplotypes Q1a1a1a1 and Q2a2b1a2a1a1b1b2b2a) on the paternal side originated from the eastern part of Eurasia, possibly from China. All other haplotypes (G1a1, I2a1b1a2a2b, J2b2b, L1a1b3c, R1a1a1b2a2, R1a1a1b2a2b1d1 and T1a1a1a) are widespread in the central and western parts of Eurasia.

The fathers of five more people came from the west, while their mothers came from the east. Principal component analysis grouped the read genomes into three clusters: the first is Sino-Tibetan (ZZS7 and ZZS25), the second is far from modern populations (ZZS10, ZZS27, ZZS43, ZZS68 and ZZS951) and the third is European (ZZS26 and ZZS60).

F3 statistics demonstrated that the genomes from the first two clusters share genetic drift with modern and ancient East Asian populations, especially the Han. And individuals from the third cluster – with the ancient populations of Central and Western Eurasia.

It is noteworthy that in this model, the ZZS60 genome was closest to the Afanasievites, who lived in Southern Siberia, Mongolia, Xinjiang, and Northeastern Kazakhstan during the Eneolithic and Early Bronze Ages.

Thus, the initial assumptions that the Han were buried in the Zhenzishan necropolis turned out to be false. Analysis of ancient DNA has shown that this burial complex was probably used to bury the descendants of local residents and people who arrived in Shangdu from different parts of Eurasia.

Apparently, at least some of the people from the investigated necropolis were the descendants of local women and alien men.