(ORDO NEWS) — Scientists conducted a study of sediment cores taken in the Nile Delta and found that agriculture arose in the region about 7,000 years ago.

At first, people were engaged in cattle breeding, and already about 6700 years ago they began to grow cereals.

Over time, agriculture became the dominant type of economy in this region. This is reported in an article published in the journal Communications Earth & Environment.

In the Nile Valley, one of the oldest civilizations arose, the existence of which was largely built around the seasonal floods of the river.

However, the conditions of this region were not always favorable for human habitation. So, in the Nile Valley, there are practically no archaeological sites dating back to the period of about 12,000–8,000 years ago.

In addition, the somewhat older burial site of Jebel Sahaba, which contained numerous remains of people with traumatic injuries, seems to indicate that local residents had to compete fiercely for scarce resources in an era of climate change.

About ten thousand years ago, the Nile Valley was an unsuitable wetland, so the tribes migrating from Western Asia, who were already engaged in a productive economy, occupied the fertile Sahara.

In that era, it was not a desert, but a wet plain with savannah vegetation and sufficient irrigation. Recent palynological studies have shown that the Nile Delta remained uninhabitable for humans until about 7,000 years ago. The oldest Neolithic archaeological sites in this region date back to about 6450-6150 years ago. 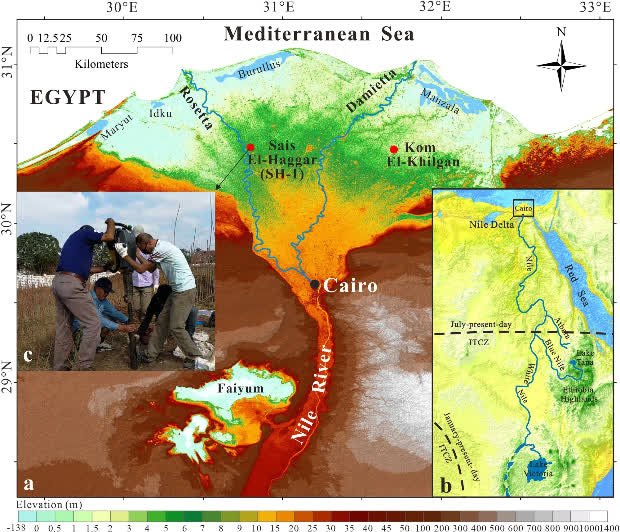 Xiaoshuang Zhao from East China Normal University, together with colleagues from Australia, Great Britain, Egypt and China, conducted a study of a sediment core 850 centimeters long, taken in the Egyptian city of Sais (Sa-el-Hagar), in the western part of the Nile Delta.

One of the earliest Egyptian sites of the Neolithic era is located on this territory, so scientists decided to study the development of agriculture in the region using its example.

The researchers found no evidence that people were engaged in agriculture in the Nile Delta more than 7,000 years ago. However, from about this time, a large amount of dung and animal hair remains appeared in the sediments, which seems to be associated with the beginning of grazing by herd animals.

It is possible that local residents also continued to hunt primitive bulls (Bos primigenius), which, in particular, is indicated by the bones of this wild animal found.

After about 300 years, that is, about 6700 years ago, pollen of cereals (Poaceae) appeared in the sediments, the grain size of which exceeds 35–40 micrometers.

This indicator usually reflects the beginning of the cultivation of cultivated plants, since pollen from wild grasses is usually smaller. The advent of agriculture probably led to the gradual decline in the importance of pastoralism in the region.

The development of agriculture is also indicated by an increase in the amount of charcoal microparticles – evidence of paleofires, which could be a consequence of the expansion of arable land due to demographic growth.

It is noteworthy that the researchers also managed to find the remains of flax (Linum), which, apparently, was already grown by the first settlers.