(ORDO NEWS) — Specialists from the Royal Tyrrell Museum of Paleontology, which is located in Canada, were able to find out why tyrannosaurs bit each other. In this case, the place of the bite was precisely the muzzle. Scientists said that in this way they fought not only for territory or females, but also to achieve a higher status. An article on this topic was published in the scientific journal Paleobiology.

Paleontologists added that on the turtles that were found during the excavation, it was very often possible to see quite large marks. Previously, they did not pay much attention to them and did not study them in detail. During the last study, more than 200 skulls that belonged to Tyrannosaurus rex were analyzed. In total, experts counted 324 marks left after biting. The experts noted that the animals were all roughly the same size and belonged to the same species.

Young dinosaurs had much fewer markings than older ones. It is assumed that fights were more frequent between adults. Large males, most likely, avoided small ones and did not attack them, but chose an opponent equal in strength.

Experts believe that this behavior of dinosaurs is quite similar to how modern animals behave. They begin to actively fight each other after puberty ends. Scientists do not exclude that tyrannosaur bites had exactly the same meaning. 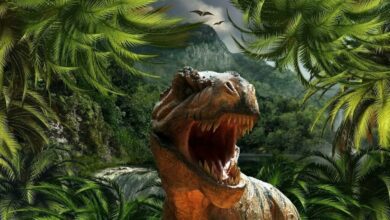