(ORDO NEWS) — A “multi-toothed swimming hunter” found in Mongolia is the first non-avian dinosaur with a body structure indicative of such a lifestyle.

An international team of scientists examined the remains of a dinosaur found in the southern part of the Gobi Desert and identified a number of unique structural features in it, indicating a semi-aquatic lifestyle and active hunting for fish.

This is the first known dinosaur outside the group of modern birds (they are now also classified as dinosaurs) with a similar structure. It is especially unusual that this species was not marine.

Scientists have named the new species Natovenator polydontus, which means “floating hunter with many teeth.”

Although the total number is not entirely clear, there are 13 teeth in his premaxilla (humans have only four teeth in the part of the jaw that is made up of the embryonic premaxilla).

The “Hunter” was small – half a meter with a tail, hardly more than 40 centimeters in height.

Despite its “bird” size, it did not belong to birds: they do not have teeth, therefore, presumably, they survived the extinction of other dinosaurs that had teeth. 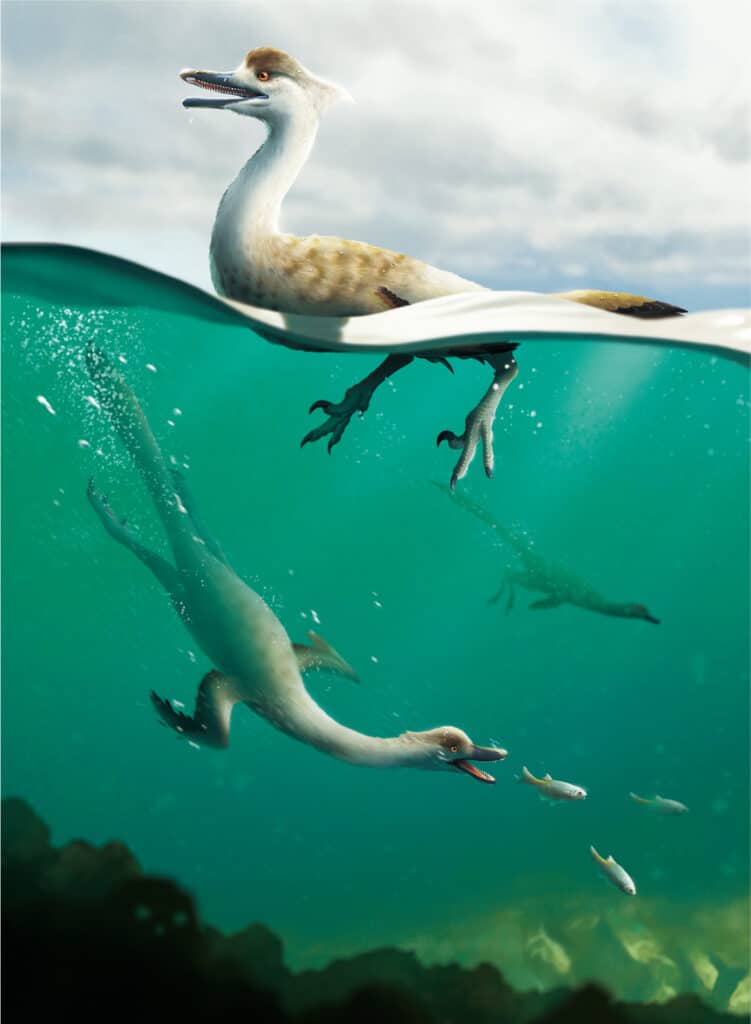 The orientation of the ribs looks unusual in the anatomy of Natovenator polydontus : they are oriented “converging towards the tail”, which is found today in actively swimming birds – both flightless (penguins) and flying (razons).

Such a structure is useful from the point of view of hydrodynamics, as it reduces drag in the water, but does not help flying or purely land-based species.

It’s not that common, considering the place where the remains of the natovenator were found. Of course, in the Upper Cretaceous, 66-100 million years ago, the Earth was much warmer than today, so there were no deserts of the level of the modern Gobi or Sahara.

The area where the new species was found was covered in lakes and wet valleys, but in any case it was neither a sea nor a seaside area.

It turns out that we have something unusual in front of us: a well-swimming species with a “penguin” anatomy, living on land.

Today, there are no creatures comparable to the natovenator in size and with the same way of life on Earth.

This probably points to the greater ecological capacity of the freshwater waterfowl niche during the age of the dinosaurs.

It is possible that other anatomical features of the natovenator are also explained by the distance from the sea. In particular, its limbs are noticeably longer than those of penguins.

In terms of leg length, it is more like a bustard or cassowary. This is probably an inevitable adaptation to conditions where there are many highly mobile land predators around.

Modern penguins cannot move fast enough on land, so they usually live where land predators are either absent or few.

The green plains of the Cretaceous Gobi clearly could not be such a place: earlier, numerous remains of predatory dinosaurs of various sizes were found there.

Most likely, the natovenator could easily escape them by falling into the water, where its hydrodynamically perfect body would give a great speed advantage.

But in order to get from land to water, a flightless creature needs to move very quickly on its own two feet. With short “penguin” hind limbs, this would not be possible.