(ORDO NEWS) — Many call it the oar king, others simply “paddlefish”. Some call it the snake fish or the scissor fish; in the Ionian and Lucanian parts it is also called the belt fish.

It usually lives in the ocean depths and is rarely found in the Mediterranean Sea. The fact is that in recent days, two fishing enthusiasts, Giandomenico Capodiferro from Laterza and Giovanni Torcivia from Taranto, caught one two-meter fish.

They were fishing on the state coastline of Metaponto, a stone’s throw from Marina di Ginosa. With their fishing rods equipped with artificial lures, they hoped for a good day.

Suddenly the fishing line was stretched to the limit, and from that moment an unusual adventure began. At first, both thought it was a thong fish, but over the following days, they became convinced that it was a paddle fish. This fish usually lives in ocean depths from 300 to 1000 meters. 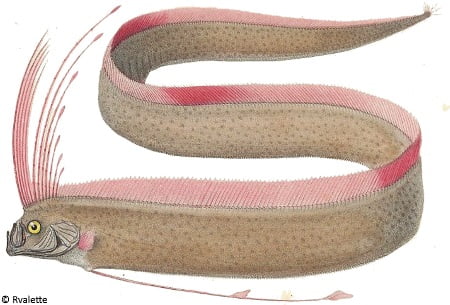 The shape, reminiscent of a sea serpent, large size and a strange red dorsal fin that runs along the entire body make it look like a mythological animal. It owes its name to the fins that resemble oars, hence the English name “oarfish”. It can reach 17 meters.

A fish of this length looks more like a monster than an ordinary fish. It is not a dangerous animal, but since it almost always stays at depth, little is known about it.

They are able to rise to the surface when close to death or too sick and swept away by the currents. Its scientific name is Regalicus glesne and it belongs to the regalecidae family.