(ORDO NEWS) — It turned out that there are very few intact ecosystems left on Earth, although it was previously believed that they occupy 20-40% of the land.

Human invasion of a particular territory is always accompanied by the extinction of one or two species, which triggers a chain of unwanted changes

The Serengeti (an ecoregion in East Africa) looks the same today as it did hundreds of years ago. Lions, hyenas and other predators continue to pursue herds of wildebeests, preventing them from eating too much vegetation. This variety of trees and grasses allows other species to live, from Fisher’s bright green-orange lovebirds to dung beetles. In turn, these species carry seeds or pollen across the plains, allowing the plants to multiply. There are people here, but they are few. Overall, this is a prime example of what biologists call an ecologically pristine ecosystem. And such places disappear.

The vast majority of land – an incredible 97 percent – can no longer be considered ecologically pristine, according to a new study of Earth’s ecosystems. Over the past 500 years, too many species have become extinct, or their numbers have declined markedly.

The researchers found that of the intact ecosystems, only about 11 percent are protected areas. Most of our intact habitats are located in northern latitudes, in the forests of Canada or the tundra of Greenland, where there is little biodiversity. But there are such untouched places in the rainforests of the Amazon, Congo and Indonesia. 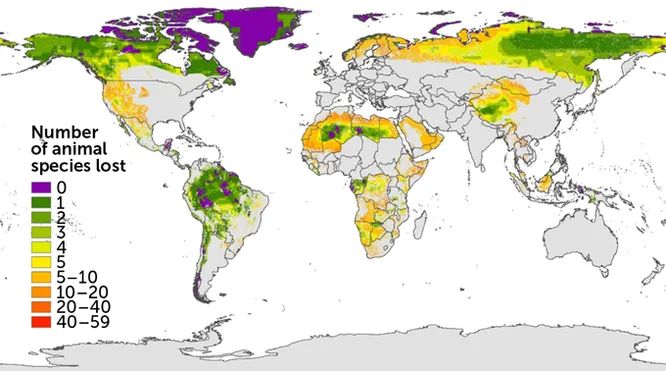 “These are the last places on Earth where no species we know has disappeared,” says environmental scientist Oscar Venter of the University of Northern British Columbia at Prince George, who was not involved in the study.

Previous estimates of the number of intact habitats were more optimistic, ranging from 20 to 40 percent. But at the heart of those studies were images from space. In the meantime, a deserted ecosystem may be hiding under the pristine canopy of the forest. “Hunting, the impact of invasive species, climate change can all harm ecosystems, but these factors are not easily detected using satellites,” says environmental biologist Andrew Plumptre of the University of Cambridge. A Serengeti with fewer (or no) lions and hyenas would look untouched from space.