VY Canis Majoris (also known as VY Canis Majoris, HD 58061 or HIP 35793) lies between 3,800 and 5,000 light years from Earth in the constellation of the same name. Technically classified as a red hypergiant, it is one of the largest stars in the galaxy.

The size of VY Canis Majoris is approximately 1,800 and 2,100 Suns, and the mass is 15–25 times greater. At its peak, the star weighed as much as 40 suns. However, astronomers believe that the star has already moved beyond the main sequence and is beginning to die. Therefore, a significant part of the mass of VY Canis Majoris has already been carried away by solar winds.

VY Canis Majoris was once thought to be the largest star in the universe. But today that title belongs to UY Scuti, a hypergiant that lies near the center of the Milky Way in the constellation Scutum. Its radius is 1420 times greater than that of the Sun. It is so large that if it were to take the place of our star, it would reach the orbit of Jupiter and Saturn.

In general, it is quite difficult to determine the exact size of both VY Canis Major and UY Shield – the fact is that both objects are variable stars. Their apparent size and luminosity change frequently. This means they are technically classified as pulsating variable stars. 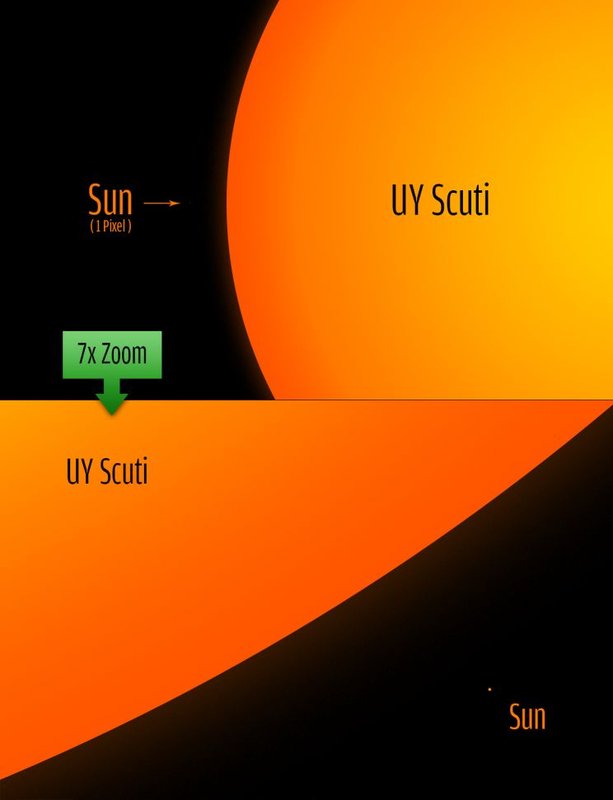 Periodically, stars can dim due to external factors. For example, their light outshines a huge dust cloud. But the reason may also be internal – especially when it comes to such hypergiants as UY Scuti and VY Canis Majoris. However, VY Canis Major has been dimming every day for the past 2,200 days. It is believed that the reason is in changes in the outer layers of gas on the surface.

In addition, in 2021, Hubble observed the star “spit out” large filaments of hot gas, which apparently coincided with changes in brightness. In March of that year, Hubble astronomers announced that they believe the reason could be that the released gases form dust “clouds” that gradually block more and more of the star’s light. At the same time, VY Canis Major remains 300,000 times brighter than the Sun, although colder than it.

Despite its enormous size, VY Canis Majoris is a relatively young star, less than 10 million years old. Especially when compared with the Sun, whose age exceeds 4.6 billion years. However, despite its young age, VY Canis Majoris is already in the process of dying. Scientists suggest that the star has already shed more than half of its mass. In principle, this is not surprising – as a rule, the more massive the star, the faster it burns gas. 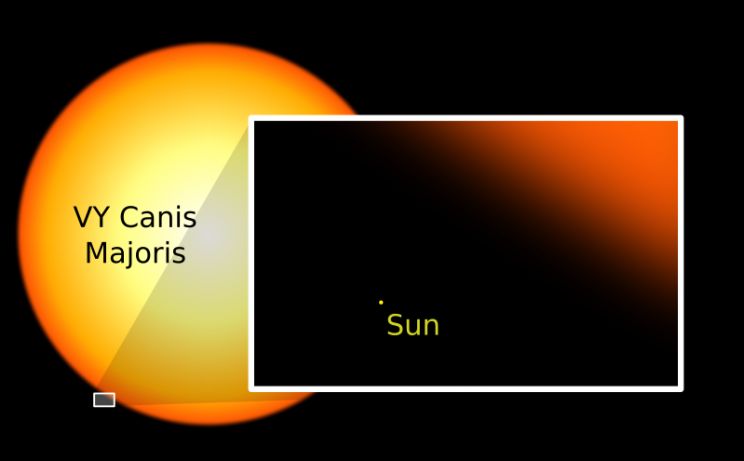 Once the fuel in its core finally runs out, the star will shrink and go into a supernova with core collapse. By some estimates, it could even spawn a hypernova that would generate 100,000 times more energy than a normal supernova. In such a process, the central region of the star becomes a neutron star or black hole, while the outer regions of gas are ejected into space, forming a colorful supernova remnant. Over the course of weeks or months, debris from the explosion will outshine the rest of the galaxy. All this will be clearly visible from the Earth in the daytime.

How dangerous is it?
However, nothing threatens the Earth, given the distance between our planet and VY Canis Major. Even if the star were much closer, the trail from the explosion would reach Earth within the next 100,000 years. Who knows if humanity will live that long?