(ORDO NEWS) — A new analysis of one of the most famous explosions in the cosmos has revealed a curious asymmetry.

Part of the inner nebula of the Cassiopeia A supernova remnant is not, astronomers have found, expanding evenly.

Something has caused a section of the cloud to move, not outwards with the rest of the material, but inwards, back towards the source of the explosion: a reverse shock.

“The backward movement in the west can mean two things,” says astronomer Jacco Vink of the University of Amsterdam in the Netherlands.

“Either there is a hole somewhere, a kind of vacuum, in the supernova material, causing the hot shell to suddenly move inwards locally. Or the nebula has collided with something.”

Cassiopeia A, located 11,000 light years away, is one of the most famous and well studied objects in the Milky Way. It’s what we call a supernova remnant the expanding cloud of ejecta left over after a massive star has gone kaboom.

The Cassiopeia A supernova is thought to have first been observed in the 1670s, lighting up the sky, and astronomers have been studying the remnant ever since. It’s an excellent sample for studying the evolution of supernovae. Cassiopeia A emits light in multiple wavelengths, and consists of a large, roughly spherical shell of expanding material, likely ejected prior to the supernova, as the star became increasingly unstable.

In their new study, Vink and his colleagues studied 19 years’ worth of X-ray data from the Chandra X-ray Observatory to piece together how the remnant has been changing over time.

They found that a section on the west side of the inner region of the shell is bouncing back inwards towards the center, at velocities between 3,000 and 8,000 kilometers per second.

They also found that the outer shock wave of the same section of shell is accelerating. According to computer models of an expanding shock wave, a collision with something will initially cause the shock front to decelerate, and then accelerate: “Exactly as we have measured,” Vink explains. So what could the shock wave have collided with?

We know from other supernova remnants that material in the space around the star can create reverse shocks; denser regions of interstellar gas and dust, for example, or even a previous, more slowly moving shell of material ejected by the star in its dying throes.

In the case of Cassiopeia A, a dense region of material emitted by the dying star could have produced a partial shell for the remnant to slam into as it expands outwards.

It could also have been the result of a brief Wolf-Rayet phase of extreme mass loss experienced by truly enormous stars that created a cavity in the space around the star.

We don’t actually know much about the progenitor star that created the Cassiopeia A supernova remnant. We don’t know how big it was, how old it was, or what its spectral type was. These results, the researchers say, could provide some clues.

“The shock dynamics reported here provide important hints on the late mass-loss history of the progenitor, be it in the form of a partial, asymmetric shell from episodic mass loss, an aspherical cavity created by a brief Wolf-Rayet phase wind, or perhaps even a combination of both,” they write in their paper.

It’s amazing that new details are still being uncovered in an object as well studied as Cassiopeia A. With new instruments turning their gaze to the object, we can only expect more mysteries to be revealed in the years ahead. 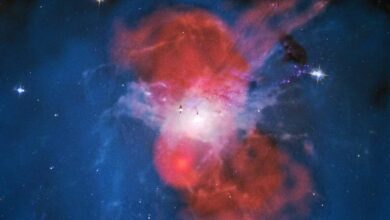