(ORDO NEWS) — This is not the first time scientists have taken spiders into space to evaluate the effect of gravity on web creation. Previous attempts have been unsuccessful, but a recent experiment pointed to an arthropod feature that researchers had no idea about.

Some discoveries are made only due to a fortunate combination of circumstances. NASA scientists admit that chance played a big role in their study

On Earth, spiders weave asymmetrical webs, the center of which is shifted to the upper edge. This is because the spiders hang upside down when they are resting, so they can run up to freshly caught prey faster due to gravity.

But what happens in weightlessness? To answer this question, the scientists selected four spiders of the species Trichonephila clavipes. Two of them went to the ISS, while the rest remained on Earth. Both groups were closely monitored by the researchers.

During the experiment , arthropods lived in special cases in which cameras were installed. Spiders, as usual, weaved a web, and scientists took pictures every 5 seconds. As a result, experts analyzed the symmetry of 100 webs using about 14,500 images.

It turned out that the web built in zero gravity is more symmetrical than the one woven on Earth. The center of the cosmic webs was closer to the middle, and spiders do not always take up space at the top and look down.

However, the researchers noticed that the construction of the web was greatly influenced by the light from the lamp in the case. The network built on the ISS by lamplight was as asymmetric as on Earth.

“We never would have guessed that light would play a role in the orientation of spiders in space,” says Samuel Zshokke, author of the new study.

“We were very lucky that the lamps were attached to the top of the case and not to the side. Otherwise, we would not be able to detect the effect of light on the symmetry of the web in zero gravity.

Previously, scientists assumed that because spiders can build their webs and catch prey in the dark, light plays no role in their orientation. But it turned out that these arthropods use light as an additional means of orientation. 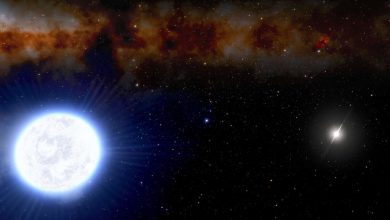