(ORDO NEWS) — Kurucay hoyuk is located near the village of Kuruchay, fifteen kilometers south of Burdur. The mound itself is located on one of the hills sloping down to the basin of Lake Burdur.

The excavations on Kuruchay mound were carried out in 1978-1988 under the direction of Prof. Dr. Refik Duru. Although 13 layers of settlements were discovered during the excavation of this mound, domestic grain or plant remains have not been found in any of them.

Despite the study of all collected animal bones, no animal remains were found that could be called domestic. In addition to these results, the fact that arable land and fields near the mound is very limited, and the mound itself is surrounded by deep stream beds to the south, west, and north, can be shown as evidence that agriculture was not practiced.

But this does not mean that the inhabitants of the Kuruchay kurgan did not know about agriculture. Obviously, these people were not engaged in agriculture consciously. Because they must have known about a neighboring settlement, such as Hadjilar, where layers of Neolithic mining can be traced.

The inhabitants of Kuruchay, who got acquainted with the production techniques in the neighboring settlement of Hajilar, may not have been engaged in agriculture, but at some levels of the settlements there were riches that required protection by very strong walls.

The most provocative question is how the non-food-producing population amassed enough wealth to justify such massive wall fortifications.

We will never know their wealth, how they got rich, or why they tried to protect themselves. Most importantly, how did they build such a system of fortifications! Or where did they learn it?

Professor Dr. Refik Duru described this system of fortifications as follows: “Level 11, on the other hand, was represented by a 26-meter stretch of impressive stone foundations running from east to west.

The western part of the wall was washed away from the slope of the mound; at the eastern end, where the fortifications formed a right angle to the north, there were gates with rounded towers.

“The second important criterion of the Neolithic way of life is permanent residence, whether it be a village or a relatively large city.

Evolved architecture with strong walls on stone foundations is attested in Kurucai from level 12 onwards. This earliest stage of construction in Kuruchai is by no means can’t be considered primitive. At level 11, we suddenly encountered a fortified city.” 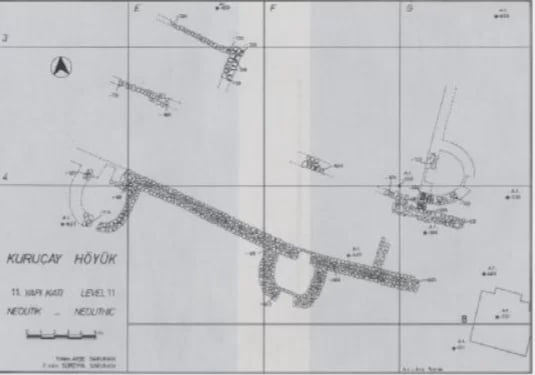 A thick-foundation fortress wall with semicircular towers, the existence of which was discovered at 11 building levels, was excavated in 1984.

The long wall of this fortification, 1.10 to 1.20 meters thick, was usually made of medium-sized collected stones. Two sides of the wall were made of relatively thicker stones, while the middle part was made of small stones and debris.

On the outer side of the wall, facing south, there are two towers with a semicircular plan. At the ends of the towers there are slots 1 meter wide. On the same axis, gaps were left in the main wall, which were closed with one row of stones. This row of stones in the passages most likely marks the rapids.

During the surveys carried out in the eastern part, the existence of a second wall was discovered, parallel to the main wall, at intervals of 4 meters.

This wall, which continues for 5 meters, is thinner and, unlike the main wall, its foundation was laid out in two rows of stones on top of each other. A wall coming from the north joins this wall at a right angle. The presence of semicircular towers was found on this wall. 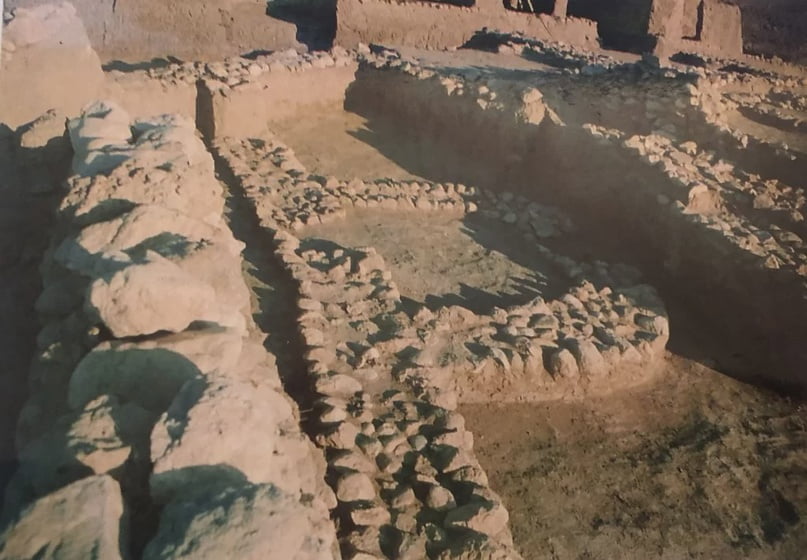 After the destruction of the dwelling of level 11, the settlement on the barrow shifted slightly to the south. After a short break, a new dwelling was founded, representing the early Chalcolithic.

From the Early Neolithic to the Early Chalcolithic (levels 12-8), architecture generally follows the usual sequence of development without much innovation. Only at level 7 do significant changes appear. It seems that new forms and standards were introduced into the layout of the settlements, as well as into the plans of the houses themselves.

Especially the Urov Kuruchay 11 castle is quite unique today with its general plan and semicircular towers. In Southern Mesopotamia, Southern Syria and Palestinian Neolithic centers this type of understanding of defense and architecture does not exist.

Apart from the round tower at the PPNA settlement in Jericho, the tradition of the round tower does not occur in these eras. Round towers appear in early Bronze Age Middle Eastern architecture.