(ORDO NEWS) — A sunspot pointing toward the Earth could trigger solar flares, but experts said it was far from uncommon and eased concerns about how flares would affect the Blue Planet.

Active region 3038, or AR3038, has been growing over the past week, said Rob Steenburg, an official with the National Oceanic and Atmospheric Administration.

“That’s what sunspots are all about,” he said. “Over time, as a rule, they grow, go through certain stages, and then fall apart. I think it’s easiest to say that sunspots are regions of magnetic activity,” Steenburg said.

Solar flares, which usually rise from sunspots, are a sudden burst of energy caused by magnetic field lines crossing near sunspots. The larger and more complex the sunspot becomes, the higher the chance of solar flares.

Dean Pesnell, a researcher at the Solar Dynamics Observatory, states that a sunspot is a “moderately sized active region” that “has not grown anomalously fast and is still small in area.”

Andres Muñoz-Jaramillo, a leading scientist at the Southwestern Research Institute in San Antonio, claims that the Sunspot is not dangerous for the inhabitants of the Earth. He also added that solar flares come in different levels.

Class A flares are the smallest, followed by Class B, C, M and X flares, the most powerful. Within each letter class there is a thinner scale with numbers, and higher numbers mean more intensity.

Sunspot AR3038 has caused C flares, but there is a possibility that they will increase in intensity, which is expected before the end of the month.

It’s a giant sunspot the size of our planet.

It’s a giant sunspot the size of our planet. 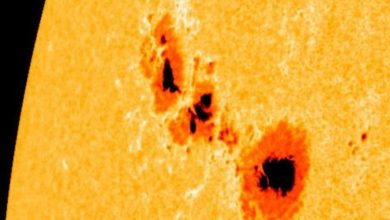