(ORDO NEWS) — Scientists from the A. M. Prokhorov General Physics Institute of the Russian Academy of Sciences and the Moscow Institute of Physics and Technology have developed a new method for the diagnosis and monitoring of autoimmune pathologies. In just 25 minutes, the biosensor they created not only extremely accurately measures the concentration of autoantibodies in human blood, but also determines their activity for the first time in the world. The combination of these parameters will allow us to develop new diagnostic criteria for autoimmune diseases, as well as new approaches to their treatment.

The work was published in Biosensors and Bioelectronics, the highest rated scientific journal in the field of biosensor technologies and analytical chemistry. Autoantibodies produced by the immune system mistakenly perceive their own cells and organs as targets to be destroyed. So there are various autoimmune pathologies. About 80 such diseases are known: from rheumatoid arthritis, psoriasis and lupus to type I diabetes and multiple sclerosis.

Many of them require observation and treatment throughout life to alleviate the condition of patients. Autoantibodies are detected in the blood in approximately 10 percent of the population. The widespread prevalence of autoimmune pathologies has an extremely negative impact on the economy, which in some countries significantly exceeds the damage from cancer. Autoantibodies appear in the blood long before the onset of symptoms of the disease, and according to their characteristics, the severity of the disease can be predicted.

The treatment of autoimmune diseases is currently significantly complicated by the inconsistency of test results from different manufacturers. “Depending on where and by what method you are doing the analysis, the results of determining the concentration of autoantibodies in the same patient sample at the same time may differ by 10 or more times,” says one of the authors of the work, Alexey Orlov, senior Researcher, Laboratory of Biophotonics, IOF RAS, Researcher, Laboratory of Nanobiotechnologies, Moscow Institute of Physics and Technology, 2010 graduate of the Moscow Institute of Physics and Technology.

“In fact, until now it was impossible to talk about the concentration of autoantibodies as an objective numerical parameter that can be used, for example, in assessing the effectiveness of treatment.” This inconsistency of test results from different manufacturers is explained by the fact that autoantibodies are a very complex, unusual object. This is a collection of many heterogeneous molecules that interact in completely different ways with each other and with the target. Until now, there was no methodology and tool that would allow this factor to be taken into account.

In addition, the methods existing and used in wide clinical practice did not allow evaluating the activity of autoantibodies – an indicator of how quickly they contribute to tissue destruction. The authors of the published work created a tool that solves both problems simultaneously: now you can quickly and with high accuracy measure both the concentration and activity of autoantibodies.

Another innovative development feature is the simultaneous determination in a single sample of the concentration and activity of autoantibodies to several targets at once. This approach significantly increases the diagnostic value of the development. The fact is that different levels of concentrations of autoantibodies to different targets often indicate completely different autoimmune diseases. Correlation analysis of data obtained simultaneously for multiple autoantibodies can significantly improve the accuracy of diagnosis.

The work shows the simultaneous characterization of autoantibodies to two targets, but the authors are working to increase their number, because using the so-called microchip technology, up to several thousand targets of about 100 microns each can be applied to such glass. 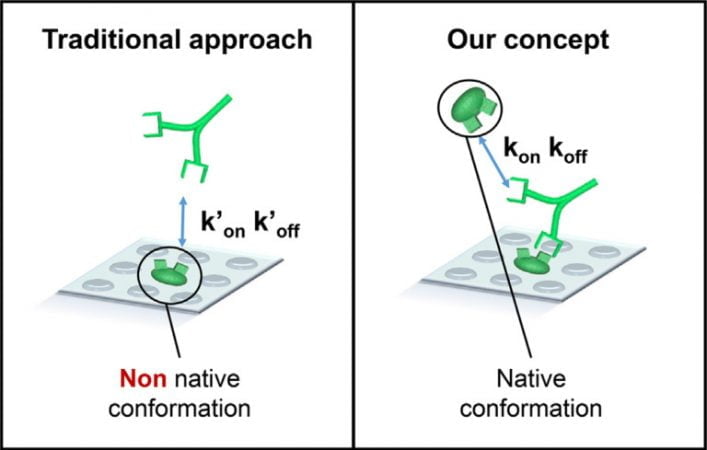 Researchers pass a drop of the patient’s blood serum over the glass surface and its interaction with the target begins. If there are autoantibodies in the serum, they find the target and attach to it, increasing the thickness of the layer on the glass. Under the glass is an interferometric system developed at the IOF RAS. This unique optical recorder allows you to measure the thickness of the molecular layer at any point in the glass and monitor its change in real time.

“A very important nuance: unlike many other methods, our autoantibodies interact not with stationary targets, but with moving ones,” adds Alexey Orlov. “For the first time in the world, we were able to study the interaction of autoantibodies with targets that are in the exact form in the body, that is, in their natural, natural form and environment.”

This is done as follows (see illustration). After the autoantibody attaches to the target fixed on the glass surface, scientists pass along the surface a solution of free target molecules. Here, the authors of the work managed to implement an approach that so far no one has been able to put into practice to solve this important problem. Each antibody has a recognizing region – a “hand” with which it grabs a target, the so-called Fab fragment.

Such “hands” he has not one, but two or more. One of them, the antibody clings to a fixed target, and the other “catches” moving targets. This process reflects the genuine (native) activity of the antibody, which can now be measured numerically. Moreover, such a scheme makes it possible, on the one hand, to fix autoantibodies from blood serum on a glass while preserving their natural form, and on the other hand, to avoid the addition of other components that can greatly distort the data obtained. 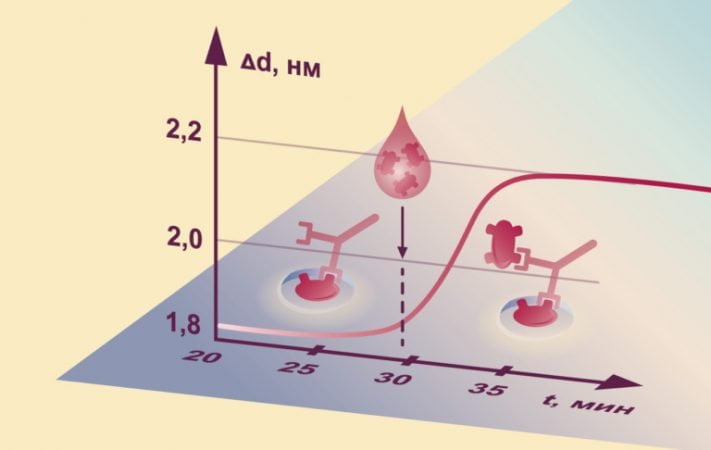 “We have developed not only an effective diagnostic tool, but also a unique tool for the study of autoantibodies,” said Petr Nikitin, 1979 graduate of the Moscow Institute of Physics and Technology, head of the team of authors, head of the biophotonics laboratory of the IOF RAS. – On the blood samples of patients, it was shown that the quantitative value of the activity of autoantibodies is a parameter that does not depend on their concentration.

Clinicians were able to quantitatively monitor both important parameters directly during the course of the disease and to develop new methods for diagnosing and treating autoimmune diseases on the basis of this. This work was supported by the Russian Science Foundation.