(ORDO NEWS) — Biologists have discovered an unknown skin disease in Antarctic fish: out of several hundred fish caught, about 30 percent of individuals were affected.

Scientists have found that the tumors were caused by protists from the Xcellidae family (Perkinsozoa group). The researchers assigned the parasites to the new genus Notoxcellia with two species: N. coronata and N. picta.

In the paper, published in iScience in advance, the scientists note that global warming may favor the spread of these parasites.

The notothenioid suborder (Notothenioidei) unites several families of fish that live mainly in the Southern Ocean surrounding Antarctica. Nototheniformes dominate these waters both in number of species (more than 50 percent) and in biomass (more than 90 percent).

These fish have perfectly adapted to life in harsh Antarctic conditions. For example, many species have antifreeze proteins (glycoproteins) in their blood that prevent fluids in the body from freezing.

However, climate change is changing the habitual habitat of nototheniforms. Scientists believe that they are extremely vulnerable to global warming, including because they are characterized by long growth and low reproduction rates.

Thomas Desvignes of the University of Oregon and colleagues in Denmark, Canada, the US, France and South Africa have discovered a new threat to these fish.

Near the Antarctic Peninsula in the fall of 2018, researchers caught several hundred specimens of Scott’s trematome (Trematomus scotti), a fish from the Nototheniidae family. About 30 percent of the fish caught had pale pink swellings on their skin.

For a detailed study of tumors, the researchers selected 24 patients and 66 apparently healthy individuals. A few weeks later, at a distance of about 100 kilometers from this place, scientists caught an individual of another species of nototheniids, Nototheniops larseni, which also had similar tumors.

Histological analysis of tumors of both species showed that the lesions are similar to the already known disease of fish – X-cell disease (X-cell disease), which is caused by parasitic protists from the Xcellidae family.

This family belongs to the Perkinsozoa, which are distant relatives of the malarial Plasmodium, Toxoplasma, and other sporozoans (Apicomplexa). 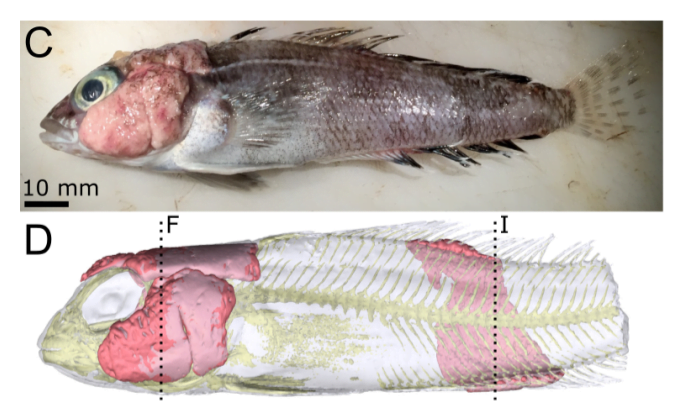 The DNA found in the tumors did indeed belong to the Xcellidae. However, phylogenetic analysis indicated that this was a new genetic lineage, so biologists described the parasites as a new genus Notoxcellia with two species: N. coronata (from Scott’s trematome) and N. picta (from Nototheniops larseni).

The researchers found that the mass of sick fish was on average ten percent less than that of healthy ones. Therefore, biologists have come to the conclusion that these parasites adversely affect the health of the hosts.

Devigne and his colleagues note that previously such lesions in fish have not been found in such large quantities. It is quite possible that such epizootics have already occurred in the past, but have not yet been recorded by scientists, since a significant part of the Southern Ocean is poorly explored.

However, it is possible that global warming is favoring the spread of parasites, as rising water temperatures may increase their ability to infect fish and, in addition, may weaken the hosts.

The authors believe that more field research is needed to understand the prevalence of this disease. In addition, we need to find out whether climate change really affects the spread of parasites.