(ORDO NEWS) — The use of artificial sweeteners may increase the risk of cancer, a large-scale, but experts not involved in the study said that this is not enough evidence to consider changing existing health recommendations.

Sweeteners are consumed daily by millions of people in products such as diet soda, in part as a way to avoid weight gain from sugar, but how beneficial these substitutes are has long been controversial.

To assess the cancer risk associated with sweeteners, the researchers analyzed data from more than 100,000 people in France who self-reported their diet, lifestyle and medical history between 2009 and 2021 as part of the NutriNet-Sante study.

They then compared consumption levels with cancer rates adjusted for other variables such as smoking, poor diet, age, and physical activity.

Participants who consumed the most sweeteners, “above average, had a 13 percent increased risk of cancer compared to those who did not consume them,” Mathilde Touvier, director of research at the French INSERM Institute and leader of the study, told AFP.

The study, published in the journal PLOS Medicine, said the increased risk of cancer was particularly marked with the use of the sweeteners aspartame and acesulfame potassium, which are used in many soft drinks, including Coke Zero.

Of the 103,000 participants, 79 percent were women and 37 percent used artificial sweeteners.

The study found that “a higher risk was observed for breast cancer and cancer associated with obesity.”

The US National Cancer Institute and Cancer Research UK state that sweeteners do not cause cancer and are approved by the European Food Safety Authority.

“The link between the consumption of artificial sweeteners and cancer risk is controversial and dates back to the 1970s when (the sweetener) cyclamate was banned for being associated with bladder cancer in rats though this has never been proven in humans,” said James Brown. , a biomedical scientist from the British University Aston.

Brown, who was not involved in the study, told AFP that it was “quite well designed” and had an “impressive” sample size.

But he added that he “does not believe this study is strong enough evidence” for the NHS to “change its recommendations for the time being.”

Michael Jones, of the Institute for Cancer Research in London, said the study’s link “does not imply causation” and “is not proof that artificial sweeteners cause cancer.”

He said the results of the study may suggest that “cancer risk may be increased in people who consume artificial sweeteners, not in the sweeteners themselves.”

Thursday’s results also don’t mean consumers should rush back to sugar-laden drinks – a 2019 NutriNet-Sante study found they were also associated with an increased risk of several types of cancer.

Brown noted that not all sweeteners are created equal, with some, such as stevia, showing health benefits.

Artificial sweeteners “still remain a useful tool that can help reduce weight gain when replacing sugar if the right sweetener is used,” he said. 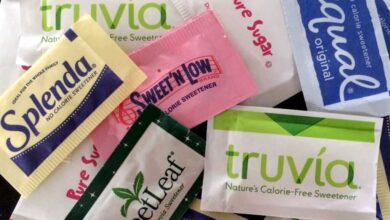 Sweeteners may raise the risk of heart attacks and strokes