(ORDO NEWS) — Researchers at the University of Cambridge have demonstrated a groundbreaking mitochondrial genome editing technique in live mice. It paves the way for new treatments for previously incurable hereditary mitochondrial diseases.

They are called the energy stations of the cell, because they are engaged in the oxidation of organic compounds, which releases energy. They store part of this energy in the form of ATP, which is then used by the entire cell, and part is dissipated in the form of heat.

Each mitochondria has its own circular DNA inherited exclusively from the mother. In total, several hundred and even thousands of copies of mitochondrial DNA (mtDNA) are simultaneously present in human cells, 5-10 copies in each mitochondria.

Mutations in mtDNA often lead to hereditary diseases that can manifest at any age and affect almost any organ.

Usually, in order for mutations in mtDNA to manifest clinically, more than 60% of the mitochondria in the cells of a tissue or organ must be defective, and the more defective mitochondria a person has, the more severe his disease will be.

Previously, mitochondrial diseases were considered incurable, but it was clear what to strive for: to reduce the percentage of defective mtDNA in cells.

Back in 2018, a team of scientists from the Department of Mitochondrial Biology at the University of Cambridge applied an experimental gene therapy treatment in mice and was able to successfully eliminate damaged mtDNA in target cells, allowing mitochondria with healthy DNA to take their place.

“Our previous approach was promising, and this is the first time anyone has been able to change mitochondrial DNA in a living animal,” explained Michal Minczuk, PhD, from the Department of Mitochondrial Biology.

Minchuk and colleagues have used for the first time a new biological tool known as double-stranded DNA deaminase-based cytosine base editor (DdCBE) to edit mtDNA in the heart of live mice. 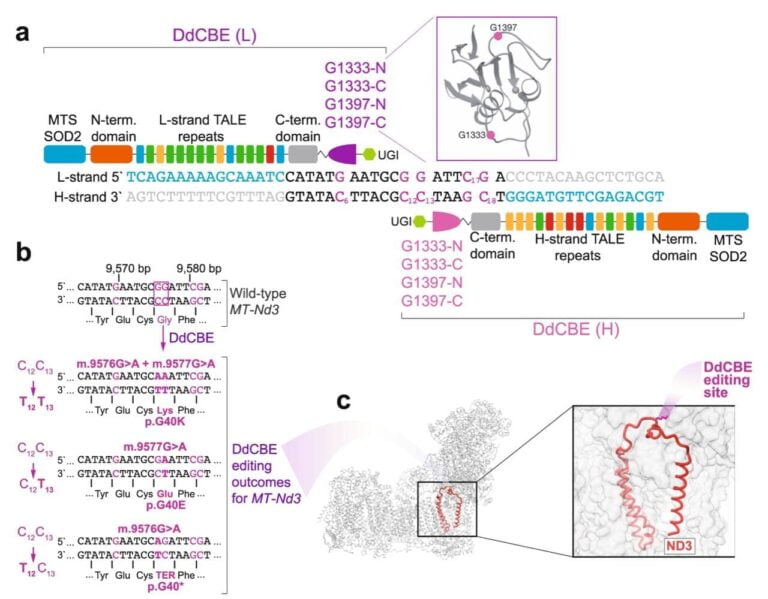 DNA encoding DdCBE is delivered to target cells via the blood stream using adeno-associated virus vectors. After the synthesis of DdCBE in the cell, the enzyme searches for a unique sequence of base pairs (CG, TA) in mtDNA and catalyzes the replacement of the CG pair with the TA pair (in contrast to the previous method, where nucleotides were excised from mtDNA).

Such a seemingly simple action in the future will make it possible to get rid of mutations that cause malfunctions in mitochondria, and, accordingly, to treat hereditary diseases associated with this.

Pedro Silva-Pinheiro , a researcher in Dr. Minchuk’s lab and first author of the study, added: “This is the first time anyone has been able to change DNA base pairs in mitochondria in a living animal. This shows that we can correct errors in defective mitochondrial DNA, producing healthy mitochondria and allowing cells to function properly.”