(ORDO NEWS) — Neuroscientists have presented a development that can protect the brain after a stroke. Experiments showed that the mice that received the drug recovered better. In the future, he can help people who have suffered a stroke.

A team of scientists from the University of Pittsburgh has created a protein that prevents cell death. A study published in the journal Science Advances shows that damaged neurons can remain viable if the biochemical pathways leading to their death are blocked.

Stroke- violation of the blood supply to the brain. It occurs because blood clots clog blood vessels and block the flow of oxygen to the brain, killing neurons. Neighboring cells can also die within a few hours or even days, so doctors should restore blood circulation in the patient’s brain as quickly as possible to minimize the effects of the stroke. “We’re looking for ways to keep these neurons from dying,” said Elias Eisenman, Ph.D., senior research author and professor of neurobiology at the University of Pittsburgh School of Medicine. “If we do this, the recovery process after the disease will go better, and we can help people with a stroke in which the clot is in an inaccessible blood vessel, or who could not get to the hospital on time.”

According to the WHO , coronary heart diseases are considered the leading cause of death, every year 15 million people suffer from stroke alone, about five million die, the same number remain disabled. Modern methods of treatment are aimed at removing a blood clot and restore blood flow to the brain. Unfortunately, this can lead to serious organ damage, oxidative stress, and the risk of a second stroke.

“There is no medicine in clinical practice that can block cell death after a stroke,” says Anthony Schulien, the first author of the study and a medical student for the University of Pittsburgh program for medical scientists. “Our experiments provide exciting early evidence of medicinal goals that we hope to one day translate into patients.” 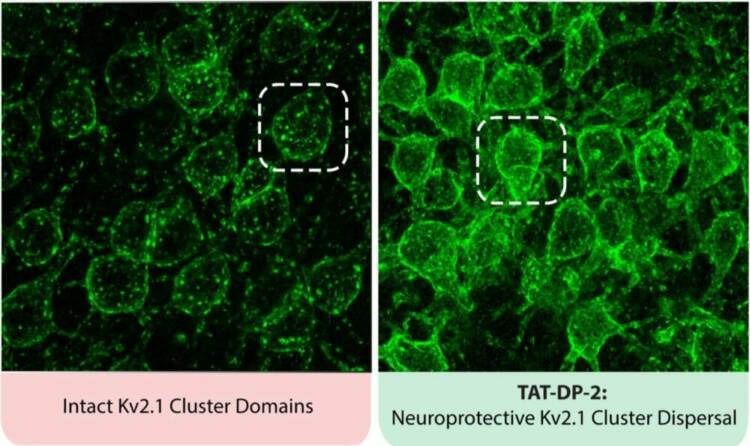 Eisenman’s group previously found that potassium leakage from neurons was stimulated by the interaction of the potassium channel in the cell membrane and syntaxin protein . They found that a compound called TAT-C1aB interferes with this interaction and slows the leakage, becoming a kind of brain neuroprotector for patients with ischemia.

For a new study, they identified two types of Kv2 channels . 1 in the cell membrane: one of them is responsible for its excitability, the other for the formation of new channels and the removal of potassium from its neuron and, as a result, death. The TAT-DP-2 protein developed by scientists disrupts the patency of new channels and retains potassium inside the cell, preventing its destruction. The group has already carried out tests on mice: the results showed that in animals that received an injection of protein, the area of ​​brain damage was smaller, and long-term neurological functions were better.

“Two completely different approaches involving Kv2. 1 showed excellent results, which indicates the promise of neuroprotective drugs of this type, ”said Eisenman. The group intends to continue research and hopes to develop a new class of drugs for patients with disorders of the nervous system, including Alzheimer’s and Parkinson’s.

More than 30 intelligent civilizations can exist in our galaxy

Facts show that Neanderthals and humans fought for over 100,000 years

More than 30 intelligent civilizations can exist in our galaxy

Facts show that Neanderthals and humans fought for over 100,000 years